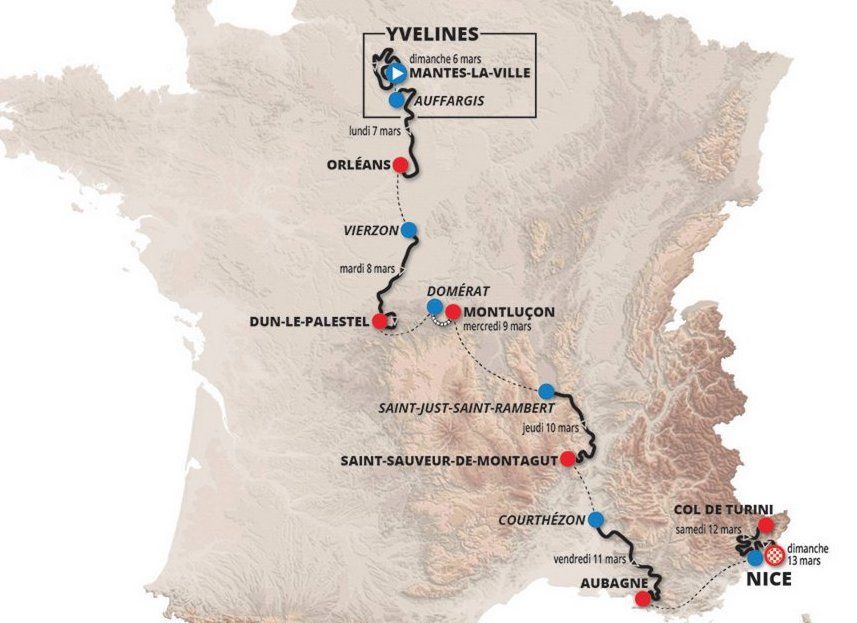 The 2022 edition of Paris-Nice will include a mountain finish atop the 14.9km Col du Turini, a rolling 13.4km time trial in central France, and a final 115km hilly stage around Nice, with the Col d’Eze offering a launchpad for final attacks before the descent to the finish on the Promenade des Anglais.

The route of the eight-day race was presented in Versailles, near Mantes la Ville, where the ‘Race to the Sun’ will start on Sunday March 6, with the 80th edition of the race including more climbing than usual in the second half of the route.

As per tradition, the race route heads south from the French capital via Orléans, Montluçon, and the eastern edge of the Massif Central to Aubagne on the Mediterranean coast near Marseille before the final two stages around the hills behind Nice.

The opening three stages appear to suit the sprinters and Classics riders but the risk of crosswinds on the exposed roads of the Beauce could shake-up the overall classification, as in recent years.

The 13.4km stage 4 time trial is between Domérat and Montluçon – the birthplace of Julian Alaphilippe. It is on rolling country roads with a steep 700m kick-up to the finish line adding an extra twist and perhaps a chance for the double world champion.

The 188.8km fifth stage from Saint-Just-Saint-Rambert to Saint-Sauveur-de-Montagut near Saint-Étienne is packed with small climbs, as is the long haul to the coast on stage 6 between Courthézon and Aubagne.

Stage 7 from Nice to the Col de Turini is only 155.4km long but heads deep into the Alpes-Maritimes and is rightly considered the Queen Stage of the 80th edition of Paris-Nice.

The climb to the finish is 14.9km long at a gradient of 7.3 per cent. It is well known for riders who live in southern France and proved decisive in the 2019 edition of Paris-Nice when Dani Martínez won the stage and Egan Bernal secured overall victory. It was Bernal’s first European stage race win and he went on to win the Tour de France a few months later.

The final stage should return to the Promenade des Anglais after two years of COVID-19 disruption. The 115km stage is packed with six categorised climbs, with the Côte-de-Berre-les-Alpes added to the mix.

The Col d’Eze once hosted a final time trial or a hilltop finish but now offers a final chance to attack and shake-up the overall classification.

Maximilian Schachmann won Paris-Nice for the second year in a row in 2021 after Primož Roglič crashed during the final hilly stage and lost three minutes.

Race organisers ASO confirmed the automatic invitation of the 18 WorldTour teams, plus Alpecin-Fenix and Arkéa-Samsic as the best ranked ProTeams. B&B Hotels-KTM and Peter Sagan’s TotalEnergies team were awarded the two wildcard invitations.

See more
SOURCE: CyclingNews   (go to source)
AUTHOR: Stephen Farrand
All copyrights for this article, including images, are reserved to the original source and/or creator(s).