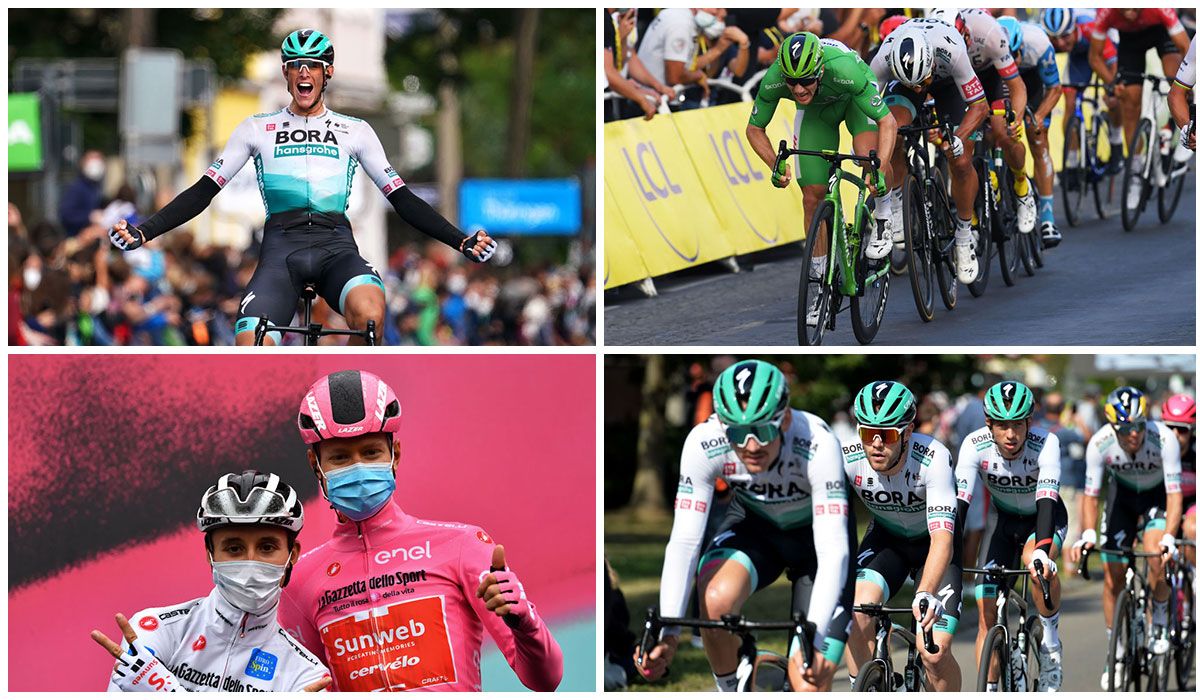 Bora-Hansgrohe, founded in 2010 as Team NetApp, made its way into the WorldTour on the back of Peter Sagan in 2017, bringing on the number one-ranked rider in the world, the reigning World Champion, and five-time Tour de France green jersey winner after landing the kitchen appliance company and faucet maker as title sponsors. It was a timely signing as Sagan’s former Tinkoff team was about to vanish, and the Slovakian brought with him Specialized as a backer.

It was a successful signing for Bora-Hansgrohe, aside from Sagan being disqualified from his first Tour de France with the team after clashing with Mark Cavendish, sparking a violent crash. However, it was less successful for Sagan, whose win count steadily dwindled from a dozen or more each season to just a handful in his final year with the German team.

Now headed to TotalEnergies for a fresh start, the team are left to rebuild but now have a much stronger foundation than in 2017. They have outside Grand Tour contenders including new signings Jai Hindley and Aleksandr Vlasov to complement Wilco Kelderman and Emanuel Buchmann. Bringing back Sam Bennett along with lead-out men Shane Archbold and Danny van Poppel from Intermarché will help offset the loss of Sagan and his train leaders, Daniel Oss and Maciej Bodnar.

Sagan’s departure leaves a hole in the team’s Classics squad, with Bennett for the flat races and Nils Politt, who finished second in Paris-Roubaix in 2019, as their leader for the cobbles. It’s yet to be discovered what the highly talented young Belgian neo-pro Cian Uijtdebroeks can achieve in his pro debut with the team but he could fill out the Classics team along with Austrian Marco Haller, who joins from Bahrain Victorious.

Bora-Hansgrohe’s win count was solid in 2021, although most of their successes came outside of the WorldTour calendar. Their eight major victories included Tour de France stage wins from Nils Politt and Patrick Konrad, a stage of the Critérium du Dauphiné by Lukas Pöstlberger, Sagan’s stages of the Giro d’Italia and Tour de Romandie, along with a pair of stages of the Volta a Catalunya by Sagan and Lennard Kämna, and Michael Schachmann’s repeat victory in Paris-Nice.

The team also exerted its presence at the Grand Tours, with Kelderman taking fifth in the Tour de France, Felix Großschartner 10th in the Vuelta a España, and Sagan winning the points classification at the Giro d’Italia.

With Sagan putting his focus on the Giro, Bora-Hansgrohe suffered his absence in the Classics. The three-time World Champion had his best result with fourth in Milan-San Remo. They made the top 10 with Politt in Omloop Het Nieuwsblad and with Schachmann in Il Lombardia, but were otherwise lacking in the one-day races.

What the team lacked in quality, they made up for in quantity, racking up wins in the Deutschland Tour with Politt, Gran Piemonte with Matthew Walls, stages in 2.Pro races: the Tour of the Alps from Großschartner, Arctic Race of Norway by Martin Laas, Tour of Norway by Walls, Deutschland Tour from Pascal Ackermann and Politt. They filled in the rest with a bucket load of 2.1 and 1.1 race wins.

Sam Bennett: The winner of the Tour de France green jersey in 2020, three Vuelta and Giro stages and five in Paris-Nice, the Irishman looked set to be the dominant sprinter this season, coming into the year with pairs of stage wins in the UAE Tour and Paris-Nice, a win at Brugge-De Panne, a close second at the Scheldeprijs, and two stages and the points classification in the Volta ao Algarve. But his relationship with Deceuninck-QuickStep fell apart ahead of the Tour de France, with manager Patrick Lefevere doubting the severity of a knee issue that kept Bennett from starting the Tour and then levelling some very personal, nasty insults on him. Now back with Bora-Hansgrohe, with whom he built his pro career, Bennett will target his second green jersey and fill the role of Sagan at the Tour.

Wilco Kelderman: The Dutchman came to Bora-Hansgrohe after several years of building his Grand Tour consistency at Sunweb. Now 30, he has a Grand Tour podium on his palmarès after finishing third behind teammate Jai Hindley at the Giro d’Italia in 2020 and his best Tour de France result with fifth this year. He will be rejoined by Hindley in 2022 and will continue to be a solid, albeit not imposing, threat to the GC. He’s unlikely to match the likes of Tadej Pogačar (UAE Team Emierates) and Primož Roglič (Jumbo-Visma) in the mountains, but he’s a proven rider who only gets stronger in the third week of a Grand Tour.

Jai Hindley: The 25-year-old had his breakthrough success at the 2020 Giro d’Italia, where he finished a surprise second to Tao Geoghegan Hart (Ineos Grenadiers) in the October edition of the race amid the COVID-19 pandemic. Before that result, Hindley showed promise as a stage racer, winning the Jayco Herald Sun Tour and finishing second in the 2019 Tour de Pologne, but he was most certainly not on the bookmakers’ radar as a Grand Tour contender in 2020. He was unable to prove that performance was not a fluke in 2021, however, suffering from bad luck with a crash and saddle sores that kept him from finishing the Giro and from starting the Vuelta. Denk has faith in the Australian, saying “We think that second place in the 2020 Giro is not the end of the journey and we will continue to work together to bring more consistency to his performances.”

Aleksandr Vlasov: There was a lot of pressure placed on the 25-year-old to be a GC contender at Astana, who signed the 2018 U23 Giro d’Italia winner in 2020. After he took fifth place in Tirreno-Adriatico, Vlasov started the Giro as a back-up for Jakob Fuglsang and Miguel Ángel López but Vlasov crashed out on the second stage. In the pandemic-condensed calendar, he got a second chance at the Vuelta three weeks later, toeing the line as team leader. He took second on the stage to the Angliru and finished 11th overall. In 2021, he was running second overall in the Giro d’Italia before he faded in the third week and finished in fourth. He led the team in the Vuelta but it proved to be too much and he dropped out before stage 20. Bora-Hansgrohe will look to strengthen the Russian’s endurance and consistency to mould him into their Grand Tour leader.

Nils Politt: The 27-year-old German loves nothing more than to go on the attack and his aggressive riding style paid off this year with a solo victory into Nîmes on stage 12 of the Tour de France. He’s a big guy who puts a lot of power into the pedals and has a high pain threshold when it comes to short climbs. After a disastrous year with Israel Start-Up Nation, Politt spent 2021 as a foil for Sagan and has not yet been able to follow up his 2019 Paris-Roubaix podium finish. In 2022, he will be a protected rider and leader for the Classics and it will be exciting to see how he fares.

Bora-Hansgrohe have their Grand Tour bases covered for 2022 with Vlasov, Hindley and Kelderman and with the addition of climbing domestique Sergio Higuita. However, with Pogačar and Roglič a step above their contenders’ level, we can expect the German outfit to employ their most effective strategy: throwing everything at the wall and seeing what sticks.

When the GC is out of sight, Bora-Hansgrohe excel at going on the attack for stage wins or minor classifications. Dutchman Ide Schelling’s ride on stage 1 of the Tour de France this year was a great example of the team’s ethos.

The team also have some stage race contenders waiting in the wings – riders like Emanuel Buchmann (fourth in the 2019 Tour de France), Großschartner, Matteo Fabbro, and stage hunters like Lennard Kämna, Pöstlberger and Konrad.

With Bennett, the team will be a major threat in the sprints, too. Walls spent part of 2021 preparing for the Olympics on the track but will most certainly make his presence known on the road in 2022, and they’ve added Danny van Poppel to the mix with Archbold, further enhancing their lead-out train.

With the loss of Sagan, Bora-Hansgrohe give up a massive presence in the Classics. Even though his star waned during his time with the team, Sagan was responsible for the majority of the team’s success in the major one-day races, winning Paris-Roubaix and Gent-Wevelgem in 2018, and nabbing a podium in Milan-San Remo in 2017. Who can fill his shoes?

The team have a solid Grand Tour lineup but with some flaws: Hindley and Vlasov have struggled with consistency, while Kelderman has been steady but one rung below the likes of Pogačar. They’ll have cards to play tactically but the sport directors have yet to prove that they can make the most of their collective strength when it comes to the GC.

Ralph Denk made a smart signing when he brought Sagan in and the Slovak’s fame helped to elevate the team. He built the team’s foundation off of and somewhat at the expense of Sagan. Denk has a broad base of talent for 2022 but will be placing a lot of his faith on Bennett, who had rocky relations with his last team and with Bora-Hansgrohe before that. The team will undoubtedly be competitive in the Grand Tours – both in the GC and sprints – but will need some luck and surprise performances to shine in the Classics.