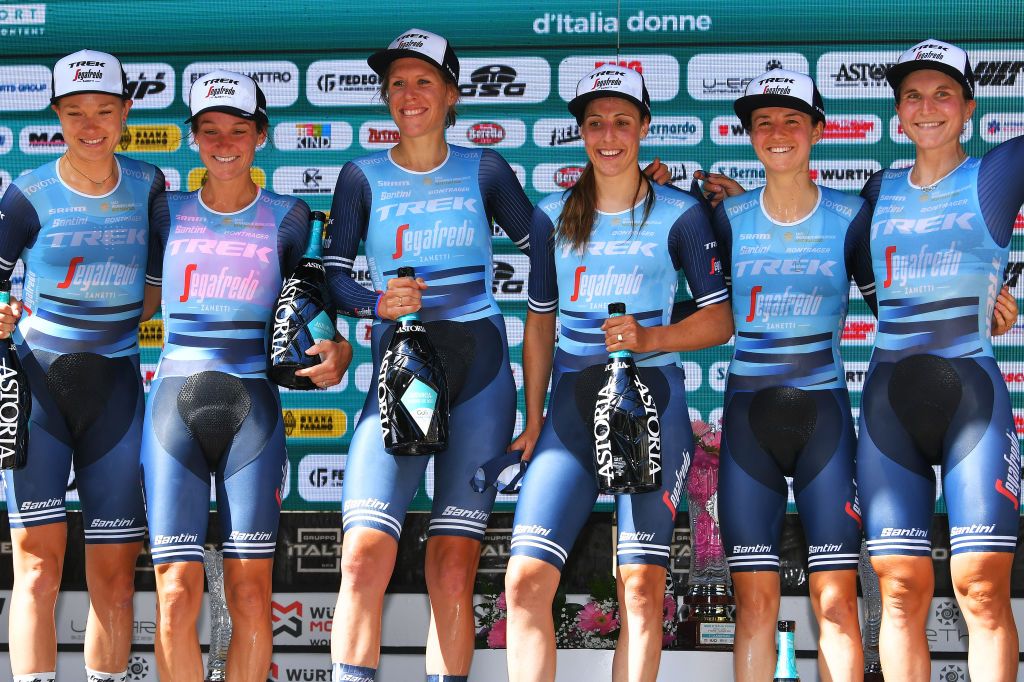 Trek-Segafredo have been around since 2011 as a men’s WorldTour team, first as Leopard-Trek and before the American bicycle manufacturer became the title sponsor in 2014 and 2015. The Italian coffee company Segafredo joined as a co-title sponsor in 2016 and the organisation added a high-powered women’s team in 2019.

They also hired Ina Teutenberg to direct the team in their first season. She led Trek-Segafredo to sixth place in the UCI Rankings in 2019 and before long they were the best team in the world.

In 2020, Trek-Segafredo were part of the first cohort of Women’s WorldTeams when the UCI created the designation, and, after having also added former world champion Giorgia Bronzini as a DS, they established themselves atop the standings in the COVID-19 abbreviated season.

Winder kicked off the strong season with a win at the Tour Down Under, and Deignan stamped her authority on the WorldTour, winning Liège-Bastogne-Liège, La Course by Le Tour, the GP de Plouay and topping the overall ranking. The team also won the opening team time trial at the Giro Rosa, a stage and third place overall with Elisa Longo Borghini, and ended the season atop both the WorldTour and UCI World Rankings.

They were the closest challengers to the dominant SD Worx outfit in 2021, ending the season with 20 wins – including Deignan’s spectacular solo at Paris-Roubaix – and second to the Dutch team in both the WorldTour and World Rankings.

Starting their third season, Trek-Segafredo have lost Winder and Trixi Worrack to retirement but have brought on the UCI Road World Champion Elisa Balsamo who, at 23, is only just starting to make her mark as a sprinter and keen one-day racer, and Leah Thomas – a more than capable replacement for Worrack’s experience and road smarts. Bronzini has moved on to direct Liv Racing.

Having kept the majority of the team together, look for Trek-Segafredo to continue to challenge the other top teams – SD Worx and Movistar – in 2022.

Trek-Segafredo started the season on a high note, with Van Dijk winning the Healthy Ageing Tour and the stage 2 time trial, but they missed Deignan in the first Classics. She had to skip Strade Bianche because of a cold and after being sick again she did not defend her Liège-Bastogne-Liège title.

Thankfully, Paris-Roubaix was rescheduled from its April slot until later in the season, when a healthy Deignan would go on to completely dominate an extraordinarily muddy debut for the women at the Hell of the North.

While Deignan struggled in the spring, the rest of the team came through with Longo Borghini taking second at Strade Bianche, winning the Trofeo Alfredo Binda and podiums at Flèche Wallonne and Liège-Bastogne-Liège. Winder also took a fine victory at Brabantse Pijl.

They got back on track in May, with Cyclo-cross World Champion Lucinda Brand shifting into high road gear at the Thüringen Ladies Tour, winning two stages and the overall. Deignan refound her form at the Tour de Suisse, and, although she admittedly botched the first stage sprint of the two-day race, she gained enough time bonuses on the next day to win the overall.

The team missed the winning move at La Course but made up for it by winning the Giro Donne opening team time trial. While SD Worx utterly crushed the rest of the Giro, Trek-Segafredo won the mountains classification with Brand and Deignan was fourth behind the SD Worx podium sweep.

Chloe Hosking came down with COVID-19 in March and she returned to victory at the Ladies Tour of Norway in August.

Longo Borghini came back from her bronze-medal performance at the Tokyo Olympics to win the GP de Plouay, Winder, Brand, and Hosking won stages at the Tour de l’Ardèche and Van Dijk won both the European road championship and her second title at Worlds in the time trial.

The team’s crowning moment came in the postponed inaugural edition of the Women’s Paris-Roubaix when Deignan attacked ahead of the first cobbled sector and rode solo to victory in some of the most treacherous conditions imaginable, with several sectors covered in a thick layer of slippery mud. Deignan held off a fervent chase by Marianne Vos (Jumbo-Visma), while Longo Borghini escaped to fill the final podium spot. It was one of the most inspired rides of the season.

Lizzie Deignan: After her performance in Paris-Roubaix last season, the Briton will have a big target on her back when it comes to the second edition in April. However, she may not even be the team’s leader for that race.

Deignan is always a threat when it comes to one-day races, and she will undoubtedly want to get her title back in Liège. She’s also a past winner of Strade Bianche and the Tour of Flanders, so as long as Deignan comes into the Spring Classics healthy, she’ll be a contender.

Later in the year, expect the 33-year-old to set her sights on the Women’s Tour and the Tour de France Femmes avec Zwift.

Ellen van Dijk: The time trial world champion is the team’s main motor and a key strategic player when it comes to supporting teammates. At 34, she is one of the most experienced riders in the team, and she is also a proven winner in the cobbled Classics, having won Dwars door Vlaanderen twice and the Tour of Flanders.

Paris-Roubaix did not go her way in 2021 and she ended the season with a concussion because of a crash there. She will be out for revenge at the 2022 edition.

Elisa Longo Borghini: The double Italian champion showed in 2021 that she is at a high point in her career and riding in her national colours will be huge motivation for her home opening Classics at Strade Bianche and the Trofeo Alfredo Binda.

In addition to supporting the team and playing foil to Van Dijk and Deignan in the Belgian classics, Longo Borghini is a good climber who will likely lead the team at the Giro d’Italia before perhaps supporting Deignan at the Tour de France.

Elisa Balsamo: The 23-year-old surprised the world when she beat Vos to claim the rainbow bands in Flanders but it was no fluke. Balsamo was the U23 European champion in 2020, and a junior world champion in 2016.

She took her first pro victory in 2018 after her 20th birthday at the Omloop van Borsele and has won stages of the Tour of California, Ceratizit Challenge, Baloise Ladies Tour and, as world champion, at the Women’s Tour.

Without a mid-season focus on racing the track with the Italian national team, Balsamo will undoubtedly add to her win tally thanks to powerful lead-out support from Van Dijk and Longo Borghini in De Panne and Gent-Wevelgem. She’s only beginning to show her true capabilities on the road.

Trek-Segafredo have a rider for every scenario and, now that Anna van der Breggen has climbed off the bike and into the SD Worx team car, a slightly better chance at grabbing more victories in 2022.

They’ve got Deignan and Longo Borghini for the hillier one-day races and stage races, Van Dijk, Balsamo and Chloe Hosking for the flatter ones, and a host of chancers for stages and long-range attacks.

The addition of Leah Thomas will help offset the loss of Winder and Worrack, while Balsamo will be the key to toppling dominant sprinters like Vos, Demi Vollering (SD Worx) and Lorena Wiebes (DSM). They will gain motivation by supporting the world champions and the European road champion, but their all-for-one, one-for-all attitude – and a super domestique in Audrey Cordon-Ragot is their biggest asset.

Trek-Segafredo have also helped foster some promising young riders: Shirin van Anrooij has shown herself in cyclo-cross to be on par with the best elite riders at 19 and was the best young rider in the Tour de Feminin this season. Elynor Backstedt was a promising junior who won the 2019 Gent-Wevelgem and Omloop Borsele junior women’s races but a spiral fracture to the tibia in 2020 had the Briton in a cast and a season-long recovery. The team kept the pressure off her in 2021 but she took a close second to Van Dijk in the 4.4km Lotto Belgium Tour prologue, demonstrating her talent.

Former U23 champion Letizia Paternoster and former world champion Amalie Dideriksen should also benefit from their track programme being shifted to the end of the year.

The team has great equipment, great support from the wider team organisation, great leadership in the team car and huge talent on the road, with proven champions like Deignan, Longo Borghini, Van Dijk and now Balsamo.

When it comes to longer climbs, however, their leaders have not yet been able to match the likes of Annemiek van Vleuten and Van der Breggen. With La Planche des Belles Filles closing out the Tour de France Femmes, they’ll be under pressure to ditch Van Vleuten in the first stages, something that is notoriously difficult to do.

Balsamo is an amazing rider but she hasn’t yet shown the consistency of riders like Vollering and Wiebes, so that could be a potential weakness.

Trek-Segafredo have assembled a very good team for 2022 and as long as everyone stays healthy they’ve got the potential to challenge for the top of the rankings.

Although Van Vleuten has shown herself to be the world’s best climber, between Deignan, Longo Borghini, Balsamo and Van Dijk they have the firepower for any of the Classics and a strong tactical position for stage races.

There has been a shift in the Women’s WorldTour, with SD Worx nabbing Olympic medalist Marlen Reusser and Lotte Kopecky, Jumbo-Visma picking up Coryn Labecki, and BikeExchange-Jayco hiring a slew of reinforcements but Trek-Segafredo have kept their best riders and added more. There’s little stopping them from being the WorldTour’s top team in 2022.