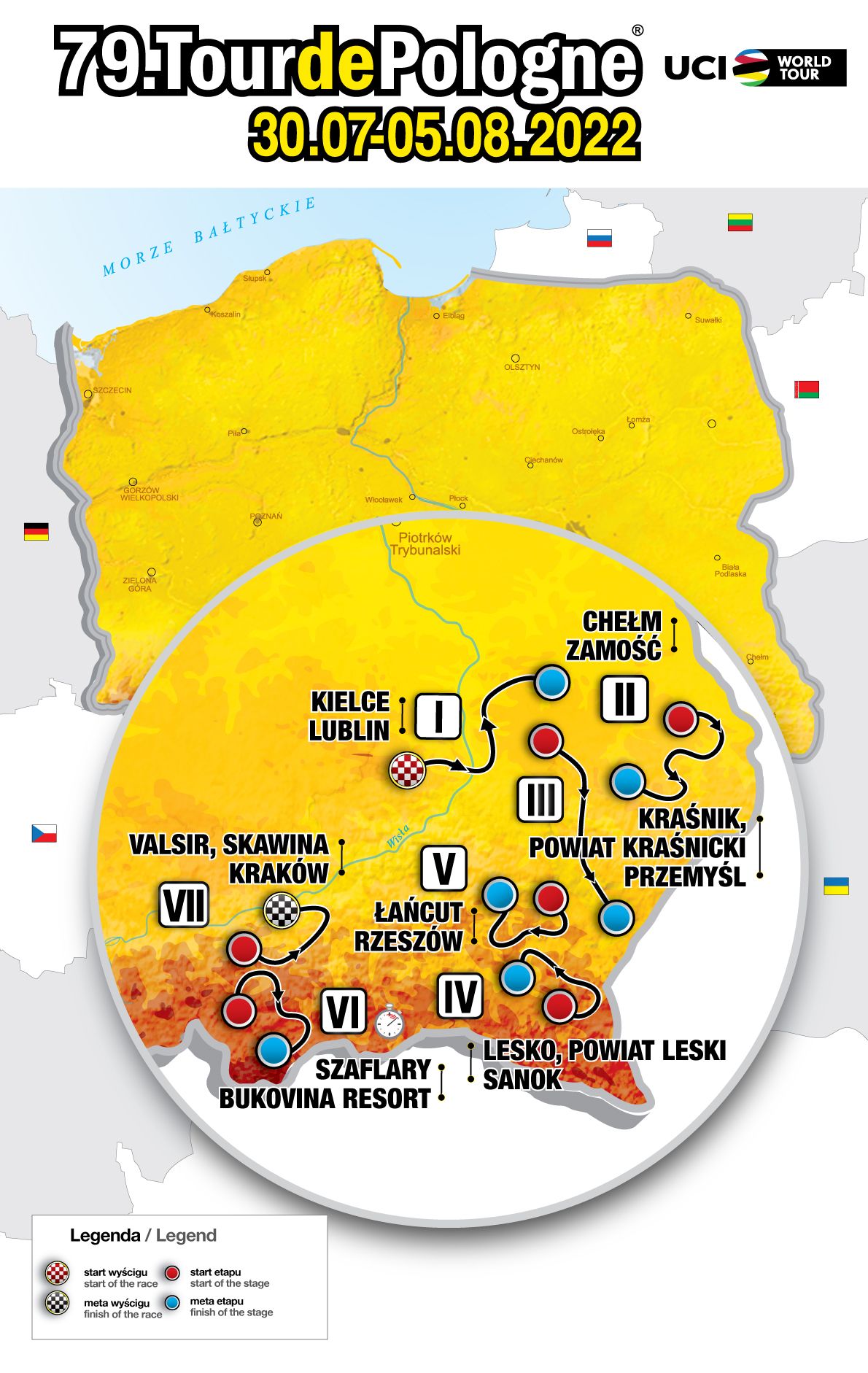 Organisers of the Tour de Pologne have unveiled the route for the 2022 race, which will run for seven stages from July 30 to August 5.

The race will kick off in Kielce for the first time, beginning with a 220.9-kilometre likely sprint stage to Lublin. A final 300 metres at a four per cent gradient will prove a challenge for the sprinters, however.

Stage 2 sees the riders head from Chełm to Zamość, taking in a hilly 203.9 kilometres before a second likely sprint finish on paved roads on a city circuit. The next day – the longest of the race at 229.7 kilometres – will prove the first major challenge for the GC contenders and climbers, with three climbs coming in the final 30 kilometres and double-digit gradients on the last of the three before a finish in Przemyšl.

Stage 4 will be another day for the GC men with more climbing spread throughout the day as the peloton tackles the Sanok-Turczan mountains. The 176.8-kilometre-long stage sees the riders head from Lesko to Sanok before another hilly, 205-kilometre day from Łancut to Rzeszów, including a steep climb just 12 kilometres from the finish.

A 15.4-kilometre uphill time trial comes on stage 6, handing the riders a challenge of 415 metres of elvation gain to the Bukovina Resort, a regular on the Tour de Pologne route. Stage 6 will be the last real chance for the GC men to make a difference on the overall standings. Then the race concludes with a likely sprint stage in Kraków after a hilly 175-kilometre day which takes in 1,971 metres of elevation gain.

The 2022 race will be the 66th edition of the Tour de Pologne, with the race having run interrupted from 1952 onwards. João Almeida, who will ride for UAE Team Emirates next season, is the reigning champion after beating Bahrain Victorious’ Matej Mohorič by 20 seconds in August.

Remco Evenepoel, Pavel Sivakov, Michał Kwiatkowski, and Dylan Teuns are among the other recent winners, with no one rider having triumphed more than once since Ondrej Sosenka in the early 2000s.