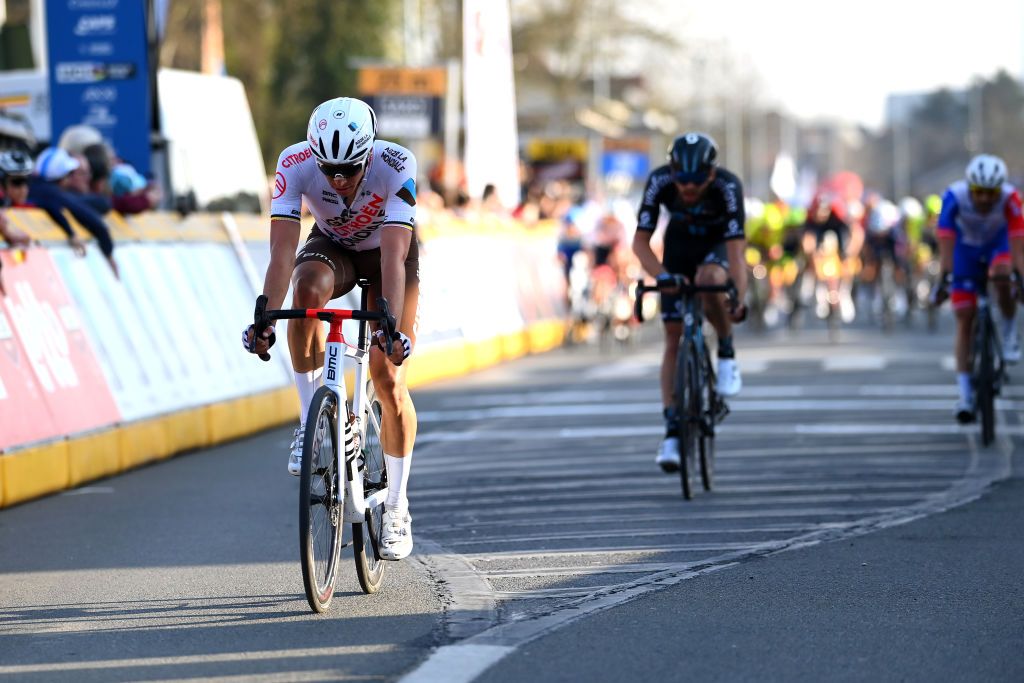 Omloop Het Nieuwsblad delivered an Opening Weekend performance that boded well for a strong Classics showing from AG2R Citroën in 2022, with both Greg Van Avermaet and Oliver Naesen in the top 4, though it certainly wasn’t a performance that carried through to the E3 Saxo Bank Classic on Friday. The team not only fell out of the top 10 at the race for the first time since 2016 but were also completely absent from the top 20 after missing the main moves.

It was as far back as 80km from the finish line that the race to Harelbeke was all but over for the French squad. Firstly none of their jerseys were visible in the small group that eventual race winner Wout van Aert (Jumbo-Visma) drove off the front with a powerful acceleration on the cobbled climb of the Taaienberg. Then the team also failed to join the handful of riders that bridged from the chase to that front group after Ineos Grenadiers charged up the cobbled Eikenberg, setting up Jhonatan Narváez to spark a move which crossed the gap.

“It was impossible to follow the top fifteen of the day today.” AG2R Citroën sports director Julien Jurdie said in a statement. “There are days when the legs just do not respond.”

Last year the team had both Naesen and Van Avermaet in the chase group of six which came over the line 30 seconds behind race winner Kasper Asgreen, with the AG2R Citroën riders taking fourth and sixth.

This year Jumbo-Visma’s Van Aert and teammate Christophe Laporte claimed the two top steps of the podium, coming over the line more than one-and-a-half minutes ahead of their nearest rivals after attacking from the lead group on the Paterberg. Stefan Küng (Groupama-FDJ) attacked from the chase group to take the final spot on the podium.

Six minutes after the race winner had crossed the line the first AG2R Citroën rider, Naesen, arrived in 21st position. It is the only time in his five race starts at the race that the Belgian has finished out of the top 8. The result came after Naesen had entered with some question marks over form as flu forced him to abandon Paris-Nice. Still, in the lead up to the race the rider had said he hoped to be in the leading group again this year.

Damien Touzé and Van Avermaet were the next best placed riders from the team, rolling in with a large group just behind Naesen. Touzé was 35th and Van Avermaet, who won the race in 2017 and has also been on the podium in three other editions, was 42nd.

Jurdie said while the initial goals for the team were high at the race – which is also known as the mini Tour of Flanders – unfortunately the day didn’t go as expected.

“We still have some great events to do between now and the Ronde van Vlaanderen We’re going to put our heads back together. We will recover well … may the boys forget this day,” said Jurdie in an interview shared on social media.

“We will have to raise our heads and show another face on Sunday, in Gent-Wevelgem,” the sports director added in a statement. ”The squad is good and it’s important to bounce back for the rest of the Flanders campaign.”