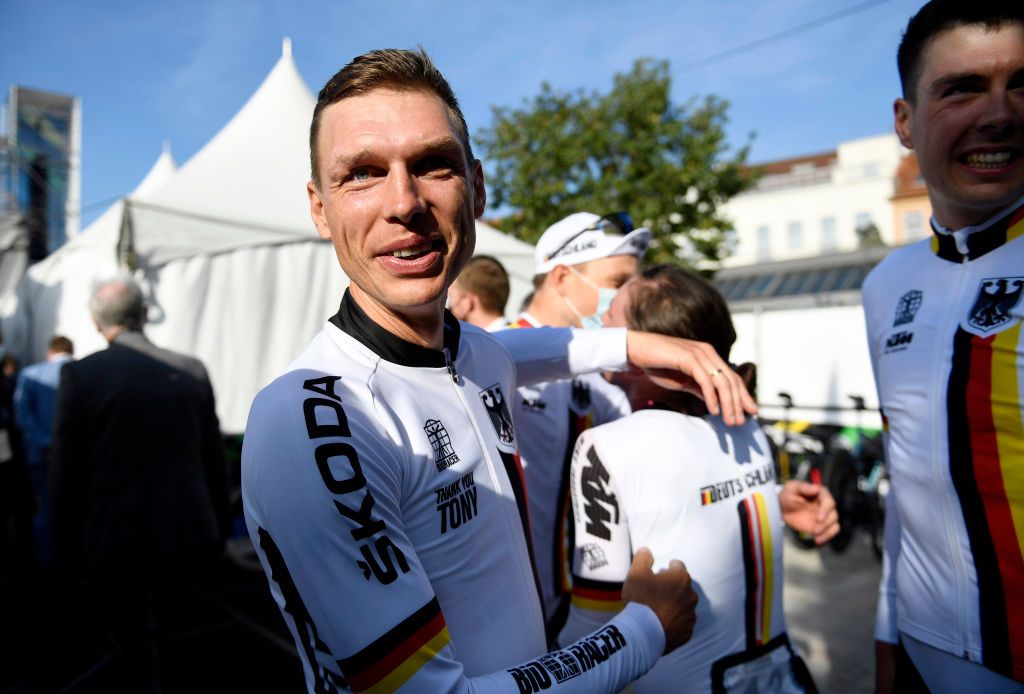 Professional athletes rarely get to choose their own endings but Tony Martin could hardly have pictured his better as he strolled off into the Bruges sunset and waved goodbye to professional cycling with a rainbow jersey on his shoulders.

Amid the curtain-closing atmosphere of his retirement announcement and final individual time trial on Sunday, the German did politely point out that he was also riding the mixed relay team time trial on Wednesday at the UCI Road World Championships. True to his word, there was to be one final flourish, as he capped an illustrious 15-year career with victory and, fittingly perhaps, bowed out as a world champion.

All were special, and that first one may stand out when he comes to look back on his career, but this parting gift is right up there.

“It’s just the best way to say goodbye that I can imagine,” the German said during an emotional, solo press conference in Bruges.

“I’ve always said that Copenhagen in 2011 will always be the biggest moment in my cycling career – that will always be like that – but today is also super high in the ranking. Maybe from the emotional side it’s even higher. I really can’t imagine a better way for my last day.”

Martin had claimed that he had largely kept the emotions at bay on Sunday as he maintained a square focus on his time trial ride and, professional to the last, he said it was the same again today. He pointed out that it always takes him a while to let his achievements sink in, but even so, the atmosphere and sense of occasion on Wednesday was not lost upon him.

“I chose the Worlds as my last day. The Worlds were always my personal highlight of the year, and where I had my biggest victories. I just love to be at the Worlds, especially in Belgium. I knew would be fantastic atmosphere here so for me it was clear that this would be the nicest way to say goodbye,” he said.

“What I could imagine came true and even more. The atmosphere was incredible, the crowds were incredible. I really enjoyed it. I also enjoyed the few minutes when we were all together with the teams in the tent, watching the end of the race. When the result was clear, everyone came to me to say goodbye and wish me all the best for my future, so that’s really emotional for me.”

It says a lot about Martin, however, that he didn’t want to make this all about himself. Nikias Arndt had just waxed lyrical about his qualities as “a true team player” and Martin himself duly reminded us that this was a team event, with five other gold medals and rainbow jerseys.

Martin spoke again about his reasons for walking away from cycling, reiterating concerns he has highlighted over race safety. He has suffered a spate of nasty crashes in the past couple of seasons, and after making his decision and going public with retirement has not a hint of regret.

“I just didn’t feel safe anymore, to be honest. Racing was not really fun anymore for me,” he said.

“This year I was lying in the ambulance en route to hospital full of blood and full of pain. I’m 36 and a dad to two daughters. You start to question yourself – if it’s really worth it and what you’re doing here. I still have passion for cycling but not for taking the risks in the races. That’s why I told myself to stop before something serious happens to me.”

Martin has no firm plans for his future, and said on Sunday he was looking forward to the impending downtime. By Wednesday evening, however, he had added one item to his to-do list.

“All my other rainbow jerseys are in my basement,” he revealed. “I don’t have any memories on the wall but now I think I’ll have some time to make my victories visible in my house.”

There’ll have to be space for a total of more than 70 – 50 of which came against the clock – and surely a special place for this final accolade.

“From A to Z, it’s perfect,” he said as he looked down at the colours that have marked his career, and with that, he was gone.