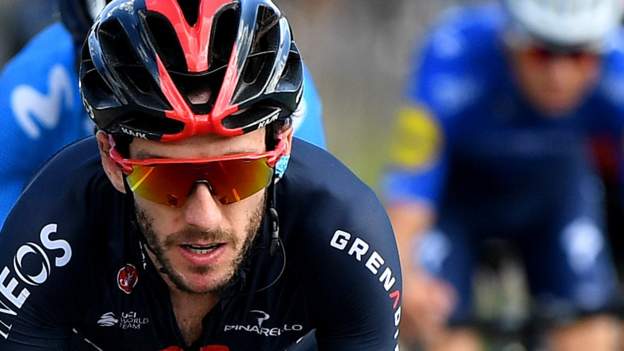 Ineos Grenadiers’ Yates had a strong race but could not haul back the leaders, including Jumbo-Visma’s Roglic following his commanding break away.

Other race favourite UAE-Team Emirates’ Tadej Pogacar was third overall after trying to chase down Roglic with Yates.

Britain’s Hugh Carthy, 26, was 12th in the general classification for EF Education-Nippo after a day leading in a group of three with Roglic and Gaudu before fading in the final few kilometres.

Pogacar’s team-mate Brandon McNulty of the USA had led by 23 seconds going into the final stage, but was roundly beaten in the high climbs.

He lost several minutes to Roglic, who showed tremendous strength in turning around his time deficit, and proving he can see out a stage race after dramatically losing last year’s Tour de France and this year’s Paris-Nice victories on the final day.

Jonas Vingegaard of Denmark was second overall, 52 seconds behind team-mate Roglic, with Pogacar one minute seven seconds down and Yates a further 19 seconds back.

How did the British riders get on?

Yates, 28, remains the most in-form British talent during the early season after this result and victory the Volta a Catalunya last month.

Ineos will be buoyed by his form, but as things stand will back Geraint Thomas as their lead rider for the Tour de France in late June. Yates’ big Grand Tour tilt is marked to be the Vuelta a Espana in August – the team are unlikely to include him in May’s Giro d’Italia squad, despite how well he is riding.

Yates’ team-mate, 2020 Giro winner Tao Geoghegan Hart, had a quiet Basque country race, playing a supporting role after his concussion symptoms for a crash during Paris-Nice.

Carthy struggled to hold the pace of the top riders across the week-long race, but on the final stage showed some of the strength which got him on the podium in last year’s Vuelta a Espana.

Meanwhile, Sunday’s opening stage of the Tour of Turkey has been shortened because of snowfall.

Britain’s Mark Cavendish will be competing in the eight-day race for Deceuninck-Quick Step.