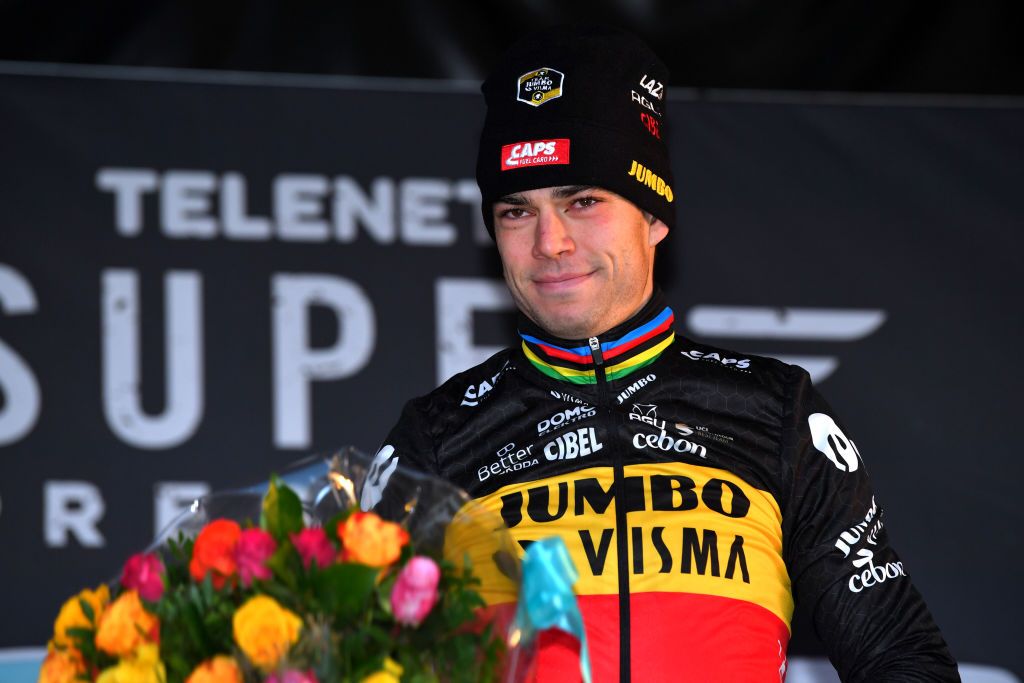 Adrie van der Poel has admitted he was impressed with Wout van Aert’s victory at the Boom Superprestige cyclocross on Saturday but warned about his son being on form to challenge him when they clash on December 26 after Mathieu van der Poel enjoyed a long off season.

Van Aert dominated the Boom race in the deep mud, soon distancing his rivals in the extreme conditions and finishing 1:42 ahead of Toon Aerts (Baloise Trek) despite falling in the mud late in the race.

His cyclo-cross rivals were shocked at his dominance in his first race back in the mud, but Adrie van der Poel, who was cyclo-cross world champion in 1996 as well as a Classics winner, had predicted it.

“Last week I told Toon Aerts’ father that Wout would win by one minute. I was right because it was almost two…,” he told the Belgian media after assisting his other son, David, in the Boom race.

“We knew that Wout was going well because he puts all his data on Strava. He did quite a lot of training with a lot of cross training. We were able to predict that he would produce a top performance.”

Adrie suggested the muddy Boom course suited Van Aert’s immense talents and the physiology that racing on the road at WorldTour level has given him.

“As a road rider you can go much deeper on course a like, you have a bigger engine,” Adrie said.

“Wout and Mathieu are in a class of their own, they simply are better endowed by Mother Nature than the rest. The level they achieve can no longer be compared with the level in cyclo-cross a few years ago. That difference is immense.

“Wout and Mathieu ride at top level all year round, in major races. The other cross riders only ride smaller competitions in the summer to do something. The difference is big and it will only get bigger.”

Van Aert will take on Tom Pidcock and other riders at Sunday’s Val di Sole race on the snow in Italy. Mathieu van der Poel will only return to cyclo-cross at the Rucphen World Cup race in the Netherlands on December 18. The two are set to clash for the first time on December 26 at the Dendermonde World Cup.

Van der Poel dominated the cyclo-cross battles with Van Aert last year and won his fourth world title but his father tried to play down expectations for his return during the holidays.

“I’ve no idea how his training is going. He’s very relaxed at the moment and is riding very little after a tough season. He deliberately chose to enjoy a long off season, so we’ll see,” Adrie van der Poel said cryptically.

“If the Dendermonde course is again like last year, then the winner is already known: Wout. Mathieu’s goals are a lot further down the road.”

Matthieu van der Poel is aiming for a fifth world title in Fayetteville at the end of January and has already confirmed he will travel to the USA. Van Aert has still to confirm his presence due his obligations on the road with Jumbo-Visma. He is widely expected to travel to Fayetteville if he has a shot at another world title, with Adrie van der Poel convinced he will be on the start line on Sunday January 30.

“Wout will definitely take part in the World Championships. Jumbo-Visma already know what they’ll be doing in the summer, but not in the winter? Come on, don’t believe that!” he said.