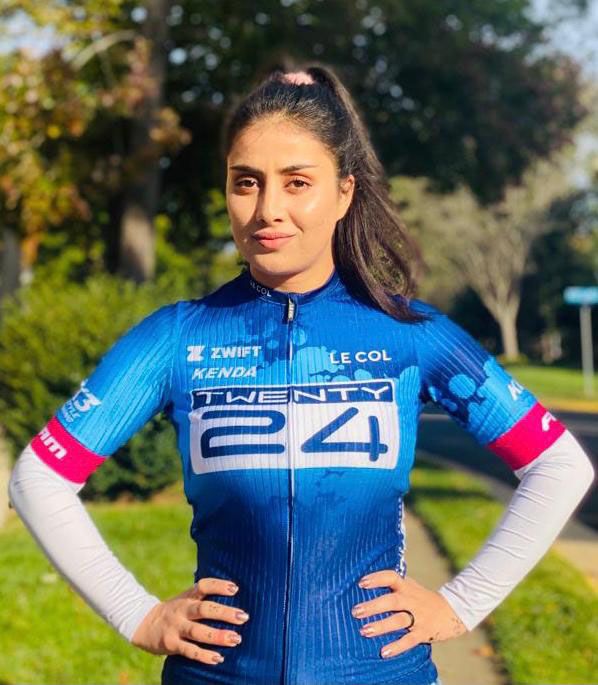 Afghan cyclist Rukhsar Habibzai will continue with her racing dreams, despite being forced to leave her country as part of the mass evacuation of vulnerable citizens who faced targeted gender violence by the Taliban. The member of the Afghanistan women’s cycling team nominated for the Nobel Peace Prize in 2016, has relocated to the US and will compete with the Twenty24 development team through 2023.

“I want our government to support the presence of women in sports so we can participate in the World Championships and bring gold home and showcase the physical and mental strength of an Afghan woman to Afghanistan and to the whole world. I want to tell them that a woman is not weak, and that success can be achieved by any gender,” Habibzai said.

Habibzai evacuated Afghanistan out of the Kabul airport right before being shut down following the US military withdrawal deadline at the end of August. She was at the airport waiting for her departure with a group of female cyclists when they narrowly escaped the twin explosions outside of the main airport’s Abbey Gate. The suicide bombing killed 13 US soldiers while recent BBC reports have put the overall toll at more than 150.

Habibzai was taken to Qatar, and then to a US military base in Germany, where she stayed for weeks before arriving at an immigration centre in New Jersey. Habibzai spent several weeks at the centre while waiting for an emergency visa before settling in another state on Friday.

“We were able to communicate when she was in the military base in Germany after she got out of Kabul around the time the bomb happened and the main airport had closed,” said Nicola Cranmer owner of the Twenty24 Pro Cycling and development team, who has been in communication with the Afghanistan women’s cycling team during the previous years.

“They took her to a military base in Germany, where she stayed for a few weeks, and she was able to communicate with us there. She was in fear of what happens moving forward.” Cranmer has set up a GoFundMe fundraiser page to reach $35,000 to help support Habibzai with housing costs, food, utilities, clothing, books, and tuition in the US.

“This fundraising effort is not to fund a cycling team,” stressed Cranmer on the GoFundMe page.

“It is to support a young woman who left her country with nothing and has dreams and aspirations to be the best athlete, student, and leader that she can be—to be an asset to her community and new country and to continue her humanitarian work.”

Cranmer said she felt apprehensive about setting up a fundraiser but noted that Habibzai’s emergency visa means that she will only receive minimum assistance from the government. “She left her country with her purse, and that was it,” Cranmer said.

Habibzai was about to graduate from the dentistry programme at Cheragh Medical University located in Kabul when the Taliban took majority control across Afghanistan. Any progress made toward gender equality and women’s freedoms over the last 20 years – such as rights to employment, education, and sports, including cycling – has been stopped.

“She has inspired many girls to take a stand for their rights, and she continues to do so. Her industriousness, vibrant nature, humility, kindness, and warrior-like spirit has helped her find her place in her personal life and in society as a true leader. She has participated in many national and international conferences to leverage her seat for the voice of her peers and to draw attention to the issue of violence against women,” Cranmer stated on the GoFundMe page.

Habibzai will join Twenty24’s development programme at early-season training camps ahead of the 2022 season. Although a schedule hasn’t been confirmed, she will compete on the road and in gravel events with the development team in 2022.

“It was a dream of hers to be on a team and have mentors in the sport. She has bigger visions than just being a cyclist; she’s an advocate for women’s rights, and she is very bold and brave in her advocacy. We are always fighting for women’s rights, but I feel like we haven’t gotten the strong foothold when we talk about women’s rights in or outside of sport,” Cranmer said.

“If our young girls can see her strength, confidence in speaking out for what she believes in, I only see that as a good thing. I think it’s good to have a strong woman role model. If we can help support someone in a humanitarian cause and help support someone to start a new life – all through the bicycle – it feels like winning if we can support women. Women need to elevate and support each other. Her bravery is inspiring, and she has so much courage.”

Habibzai has spoken with Cycling News for an in-depth feature to be published this week.

Kirsten Frattini is an honours graduate of Kinesiology and Health Science from York University in Toronto, Canada. She has been involved in bike racing from the grassroots level to professional cycling’s WorldTour. She has worked in both print and digital publishing, and started with Cycling News as a North American Correspondent in 2006. Moving into a Production Editor’s role in 2014, she produces and publishes international race coverage for all cycling disciplines, edits news and writes features. Currently the Women’s Editor at Cycling News, Kirsten coordinates global coverage of races, news, features and podcasts about women’s professional cycling.