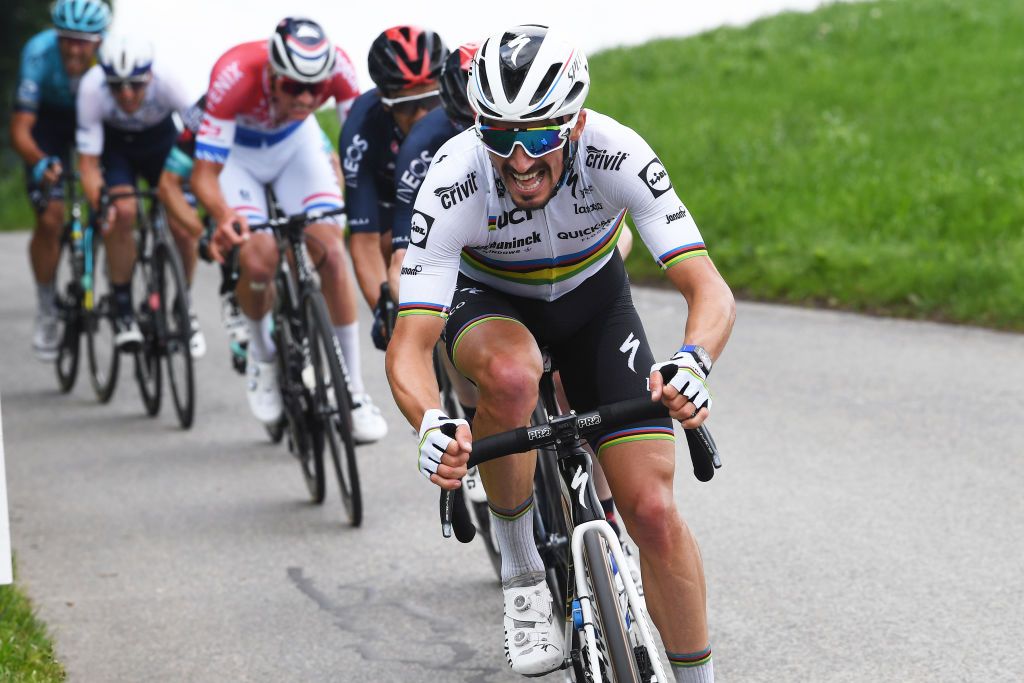 Julian Alaphilippe has been handed a 20-second penalty for taking an illegal feed in the final kilometres of stage 5 of the Tour de Suisse.

The world champion was part of a 10-man chase group behind attackers Esteban Chaves (Team BikeExchange) and Jakob Fuglsang (Astana-Premier Tech) nine kilometres from the summit finish at Leukerbad when he dropped back to his Deceuninck-QuickStep team car and took a bottle and energy gel.

The race director, watching proceedings from the car situated just behind the group and ahead of the Deceuninck-QuickStep car, could be seen gesturing at Alaphilippe as the Frenchman took a bottle, and the pair had a heated discussion shortly afterwards.

As a result of his penalty, Alaphilippe drops from third to fourth on the general classification, falling from 33 seconds to 53 seconds behind stage winner and race leader Richard Carapaz (Ineos Grenadiers).

According the UCI regulation 1.2.039, which prohibits feeding in the final 20 kilometres of a stage at a WorldTour stage race, Alaphilippe will also receive a 200CHF fine for his actions.

“I was à bloc, I needed to drink, and my director said I could take a last bidon, but at the moment I was taking it he hesitated a bit,” Alaphilippe said after the stage.

“He had just received the order from the commissaire – apparently it was no longer authorized. I’d just thrown my bidon, I needed to drink, so I took it. Apparently, I’ve been penalised but that doesn’t change anything at all.”

Alaphilippe finished the stage in seventh place among a chase group behind Carapaz and Fuglsang.

Moments earlier, Max Schachmann (Bora-Hansgrohe) had gone back to his team car before handing back the item he had been given. The German now moves up to third overall at 38 seconds behind Carapaz.

It’s not the first time Alaphilippe has fallen foul of the ‘unauthorised feeding’ rule. He lost the race lead on stage 5 of the 2020 Tour de France  after taking a bidon from a soigneur with 17.1 kilometres to go on the 183-kilometre sprint stage from Gap to Privas.

Nevertheless, Alaphilippe didn’t seem too concerned about his punishment, and was happy with his performance despite not coming away with the victory.

“It was a really nice stage – fast all day. In the final I expected a hard race and was focused up front. The rhythm was very high and I gave it my all,” he said.

“The last climb was a bit more tactical, with some attacks, and I was focused on my tempo because I would have exploded if I’d followed every attack. In the end it was done à la pédale and I was in my place, so no regrets.”

SOURCE: CyclingNews   (go to source)
AUTHOR: Daniel Ostanek,Patrick Fletcher
All copyrights for this article, including images, are reserved to the original source and/or creator(s).