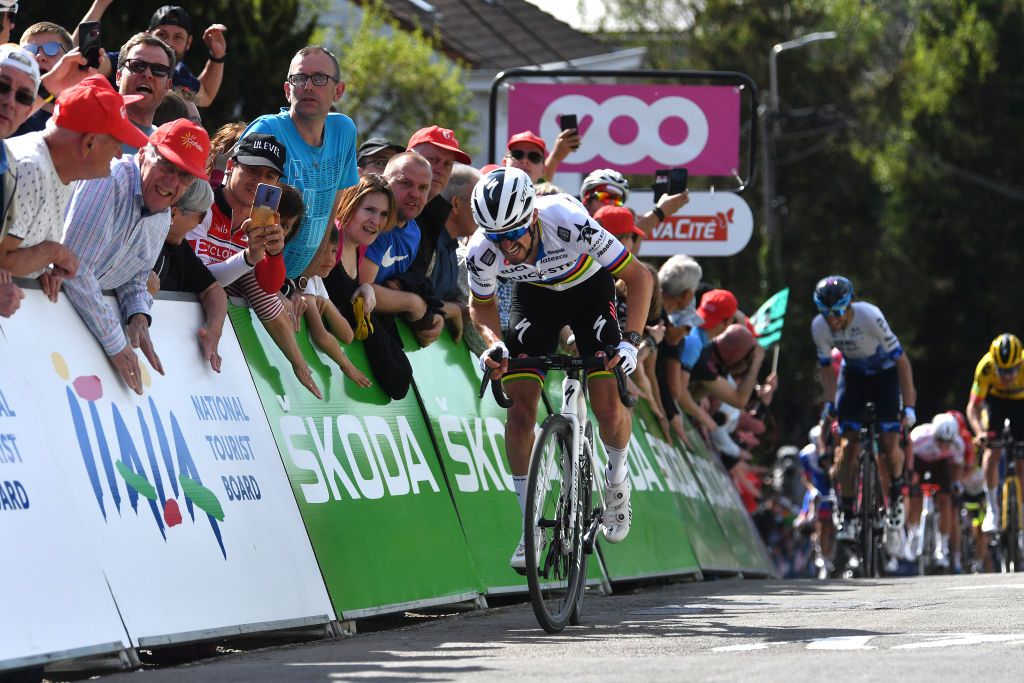 Following his fourth-place finish at Wednesday’s La Flèche Wallonne, Julian Alaphilippe said he felt a pressure had been lifted from him and that he headed into Sunday’s Liège-Bastogne-Liège without any pressure to win.

The world champion has come close to victory several times before, having finished second at the old finish in Ans on his debut in 2015, then being demoted from second to fifth having celebrated a ‘win’ too early two years ago, and taking the runner-up spot to Tadej Pogačar (UAE Team Emirates) last spring.

This year Alaphilippe is among the big favourites once more as his QuickStep-AlphaVinyl take the start in search of a big Classics win at what will be the finale of the 2022 spring Classics season.

“Liège is a big goal, but I’ve been saying that since 2015,” Alaphilippe said in a pre-race press conference on Friday. “I don’t feel any pressure. With a strong team and especially with Remco Evenepoel in it, we can go for the win.

“It is one of the most beautiful races of the year – it’s a Monument. I was always close to victory, but it never worked out. It’s a race full of prestige, and it’s difficult to win and everybody respects it and dreams of winning.”

Alaphilippe said he was happy with his shape after Flèche, having finished fourth on the Mur de Huy after winning the race in each of his three previous participations. He’ll line up as a main favourite for the 257-kilometre race on Sunday, facing off against Pogačar, Wout van Aert (Jumbo-Visma), and Flèche winner Dylan Teuns (Bahrain Victorious).

He said that he expects a fast finish to the race, which has a slightly different final this year. The Col de La Redoute is now closer to the end at 29km to go, while the following Côte des Forges has been removed, leaving a shorter lead-in to the final one-two punch at the Côte de la Roche-aux-Faucons and Boncelles.

“Of course, the race can be different,” he said. “The parcours has changed a little bit. I think everybody knows this, and after the recon today we saw that it’s going to be fast to the finish line from the last climbs already before La Redoute.

“I think the main point is that the race can be more open and faster in the end. I’m not really worried after a Flèche – I have something in my head, and I think until now, I always did quite well when I want to peak my form. Like Remco said, the bunch is very strong, but we are also super motivated for Sunday.”

Several recent Classics have seen the action kick off a long way from the finish, with Ineos Grenadiers’ crosswind move inside the first 50km of Paris-Roubaix being a recent example.

That kind of very early move hasn’t often materialised at Liège-Bastogne-Liège, which boasts as much elevation gain as a Grand Tour queen stage and only gets harder as the race goes on. Alaphilippe said he had “no idea” whether to expect long-range moves on Sunday.

“You have to be prepared for it to be really fast final, a really hard race,” he noted. “For sure, some teams want to try to make the race really hard already far from the finish line, but like I said before, it’s easy to see that from La Redoute to the finish line it’s quite fast.

“We just have to be prepared in case one team wants to go full gas already before. Anyway, it’s going to be a really hard final, and like we saw in the last few races it’s almost always full gas. We have to be ready for that and have good legs.”