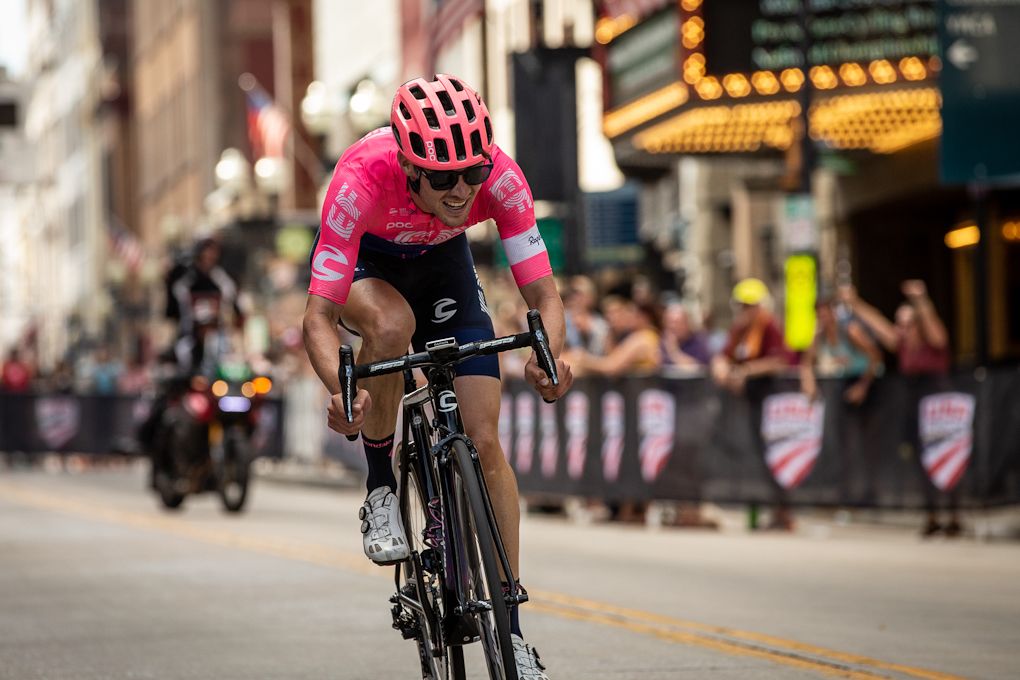 At 1:15 p.m. in downtown Knoxville, Tennessee, 152 men will line up to race 190 kilometres for a winner-take-all national title at the USA Cycling Pro Road Championships. That’s a 50 per cent increase in field size since the last edition of the road race in 2019, won by EF Education-Nippo rider Alex Howes.

The US Pro road race can be a numbers game, with big teams having more cards to play over the course of a five-hour race, and early-summer humidity can play a significant role in the tactics of a long day in the saddle, and 15 passes over the narrow Sherrod Road climb.

“Nationals is definitely a race that plays out completely different than the normal script in cycling. We definitely aren’t the strongest team out there but we probably have one of the more experienced teams that I’ve come to nationals with,” the defending champion told Cycling News on Saturday.

Five WorldTour teams are represented with riders in the road race on Sunday, with EF Education-Nippo field the most riders as a group – Howes, 2021 time trial champion Lawson Craddock, new teammate Will Barta and retiring teammate Tejay van Garderen.

“Four riders is definitely an advantage, but at the same time it’s not a big enough roster where you can completely take control of the race, and decide who gets in the breakaway, chase the breakaway and shepherd your leader into the final and he can cap it off. You need just a little bit more manpower to pull off a stunt like that,” said Van Garderen, who will make the road race the final competition in his storied 12-year career.

“We’re going to have to figure out how we can force the race to get a selection made where we have numbers in the group, and it’s not on us to control it.”

It’s a shadow of force compared to Rally Cycling and Aevolo, each with nine riders, as well as the top Continental teams with eight or seven riders, like Project Echelon and Hagens Berman Axeon. EF-Nippo are not the strongest team overall, but Howes said their depth of knowledge is an advantage.

“All four of us know how to race our bikes. I’m happy with how things look on paper,” Howes added. “It’s definitely a challenging course, relatively tactical. It’s a course where it leaves a lot of doors open for different people. In the past, and certainly on Sunday, the heat and humidity play a big part on how the race plays out. You see guys crumble towards the end if they haven’t done a good job fueling or staying cool.”

Van Garderen told Cycling News he agreed that the muggy Southern weather could play a factor, but also surprise moves on the backside of Sherrod Road, like the one Howes made with two laps to go in 2019.

“A lot of times the moves everyone expects are on the main climb, but its on the drags after the climb where people might be tired, or might have spent some energy so they are looking to sit in, and you can hit them with a surprise attack,” he said. “So you have to read the race as it comes. The four of us are good at picking up the signals, how people are feeling and what people area doing.”

One of the wildcards on EF Education is Will Barta. Placing 11th in the 2017 US Pro Road Race Nationals in Knoxville as a 21-year-old riding for Hagens Berman Axeon, he’s in his first year with EF Education, having a delayed start this season when he suffered a femur fracture in a crash to avoid a dog on a training ride. But he placed fifth on Thursday in the time trial.

“He’s incredibly nice, a genuine guy. He’s an incredible talent. The first time I had this realization that ‘this guy is really good’ was at the Vuelta last year when he nearly won that TT. When I saw that I was like, ‘he’s better than I thought, he’s legit’,” Van Garderen said about Barta losing the Vuelta stage by a few seconds to eventual winner Primož Roglič.

And then there’s Craddock, who’s on the Olympic team and using the road race to prep for Tokyo. “Sunday is also a big target, so I didn’t just come here to focus on the TT,” he said after winning the time trial title on Thursday.

The EF foursome is locked and loaded. Howes said it’s been special to have the stars-and-stripes jersey for two years now, and may not be ready to give it up.

“Since I’ve had the jersey I’ve raced in 12 countries and ridden in 14 different states, so I definitely got it out there and enjoyed my time wearing it,” he said regarding more numbers.

“I was feeling like I got shorted there a little bit with the global pandemic but the second half of 2019 was a great second half of the year. I raced a total of four days in 2020. And in 2021, still a few hiccups with the pandemic, but I’ve managed to get a fair number of races over in Europe,” Howes said.

“I’m coming off the Tour de Suisse, definitely a little fatigued from that last week and coming straight in for Nationals, so that’s been a bit of a challenge.

“I really have to give a round of applause to the City of Knoxville for shutting everything down for us. They put on a great show. Personally, I’d like to see the nationals leave the Southeast, some day. It’s a huge country.”

USA Cycling Mountain Bike National Championships will be in his home state of Colorado, so Howes said he may “take a crack” at the cross country races in July. He’s enjoyed gravel racing, and “keeping it fresh” keeps him going.

“I love racing on the road, it’s hard and fast. I’d be lying if I said it wasn’t challenging certainly over in Europe it’s tough. I really enjoy racing at home, and probably more than anything in front of a hometown crowd. If the way to do that is on the dirt, then I’m going to do it.

“Anything on two wheels appeals to me. Why not? Unlike road nationals, it’s actually close to my house.”

Matthew Glaetzer: From cancer to a shot at Tokyo Olympics track cycling medal