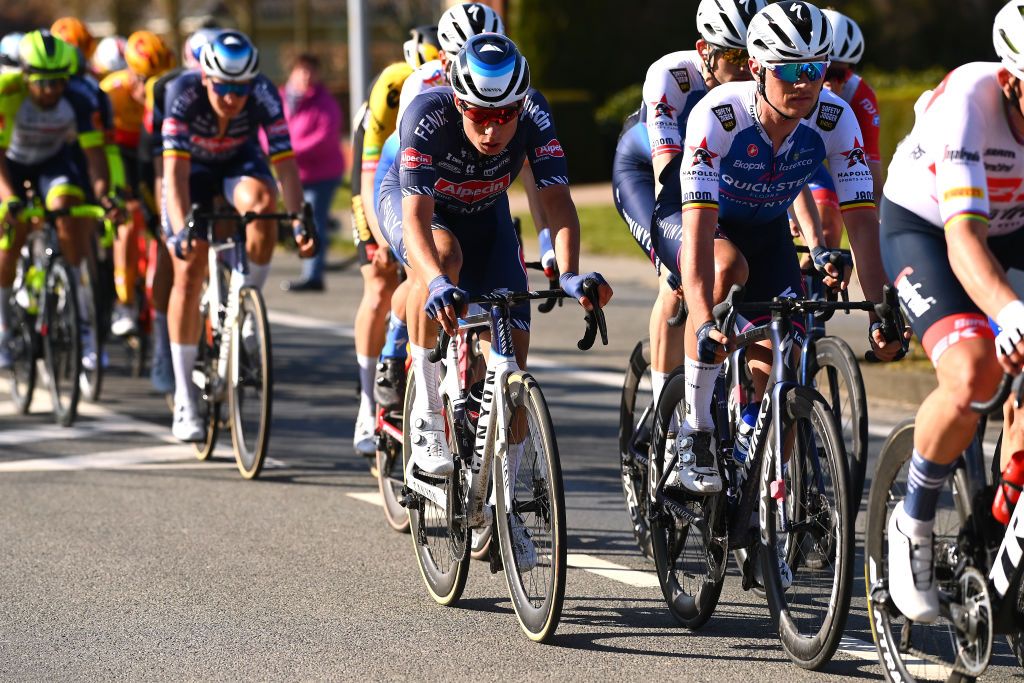 With no Mathieu van der Poel leading Alpecin-Fenix at Gent-Wevelgem, the Belgian squad looked to sprinters Tim Merlier and Jasper Philipsen for leadership during Sunday’s race.

The strategy didn’t work out as hoped, with Merlier finishing sixth in the bunch sprint behind the four escapees, while Philipsen took 21st place in the same group. On the final run-in, the team had played its part in chasing the attackers and eventual race winner Biniam Girmay (Intermarché-Wanty-Gobert), along with Groupama-FDJ and QuickStep-AlphaVinyl. However the chasers lacked the speed and unity to catch the winning attack.

After the race both Philipsen and team domestique Gianni Vermeersch laid the blame on the other teams in the group, including Groupama-FDJ, for not co-operating in the chase.

“Personally, I would’ve expected Groupama-FDJ to do a little bit more in the chase,” Philipsen told WielerFlits after the race.

“We only had Gianni to work, and he couldn’t do it alone.”

Vermeersch also raised the subject of support from other teams, noting that there were fewer teams helping in the chase than there were represented in the breakaway group up the road.

“Because of [my crash] I had to shoot a bullet. But I did what I could after that,” he told WielerFlits. “We received no support, which I don’t quite understand.

“Only four teams were represented in the lead group, so it’s strange that only three teams contributed to the chase. A real shame.”

As for the team working for two sprinters in Merlier and Philipsen, rather than choosing one and thus having an extra pair of legs to work in the final, Philipsen said that it was the plan from the start of the day.

“That was the plan that was made before the race,” he said. “The agreement was made that both Tim and I would both take our chances in the sprint. It’s too bad that the lead group stayed ahead because I wasn’t bad.

“It was a bit hectic in the sprint. A missed opportunity for the team,” he concluded.

While Philipsen said he was where he should be on the tough ascents of the cobbled Kemmelberg, Merlier said that he felt he wasn’t at his top level during the race and certainly not on the climbs.

“I was definitely not super,” he said. “I couldn’t go over my limit, especially on the cobblestones. The passages on the Kemmel were definitely not good enough. I know my wattages can still be good, so this is kind of a shame.

“I think they were maybe the best in the race. If you can stay in front with four… We didn’t sit still behind them, either. Girmay is definitely a great winner.”