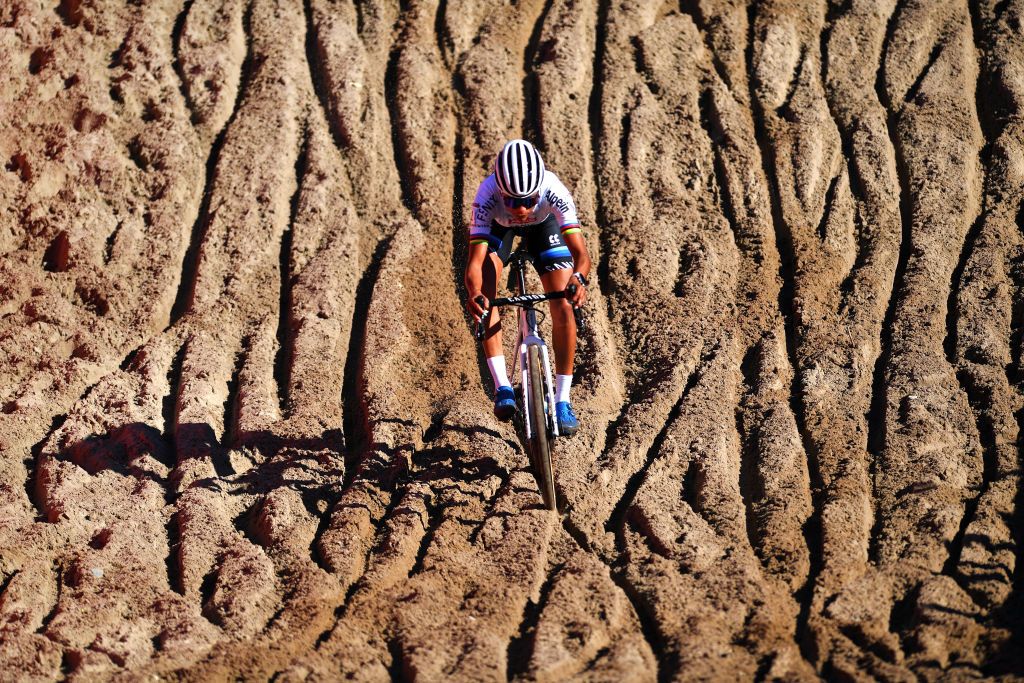 Ceylin del Carmen Alvarado (Alpecin-Fenix) was quick to return to the podium at the UCI Cyclo-Cross World Cup after missing the opening rounds due to health problems. The European champion worked her way up the field at Zonhoven to overcome a less than ideal start position, to take third in the fourth round of the series at the sandy Belgian course.

Alvarado was absent from the opening three rounds in the United States due to medical problems though the team said a “disturbed blood count” had normalised again meaning the rider who won the  World Championship in 2020 could race at Zonhoven. It wasn’t an easy return, however, as being missing from the Waterloo, Fayetteville and Iowa City rounds did not help the Dutch rider’s start position, with 19th on the grid placing her in the third row.

“It was really hard,” said Alvarado in the televised interview immediately after the finish. “The race itself is hard but also starting from the back and riding myself to the front was also hard too, so it was the lot.”

The 23 year old took the third place behind Denise Betsema (Pauwels Sauzen-Bingoal), who made the most of the sandy course, and world champion Lucinda Brand (Baloise Trek Lions). Alvarado overtook teammate Pieterse on the final lap of the seven lap race to shift herself into the podium position but Pieterse didn’t give up the podium spot easily, and held firm for fourth to finish as the top U23 rider.

“I can be happy with today,” said Alvarado, though she did wonder what could have been if she started in the front row.

Riding large stretches of the sandy sections that many others around her were forced to run and picking up the pace as the laps went on, Alvarado’s lap times in the final three circuits of the race were only second to winner Betsema, beating those of Brand who however still finished with a buffer of 22 seconds to the the third-placed rider.

“The difference with Brand was not much,” said Alvarado in a report on Dutch website Wielerflits, pointing to the fact that she had to work her way through the field to come from behind. “We’ll see next week.”

The next World Cup round is at Overijse on October 31. Last season Overijse was the fifth and final round of an abbreviated World Cup series, with Alvarado taking her only World Cup win of the season on the Belgian course. She took victory ahead of Brand, making ground with her speed on the muddy descents.