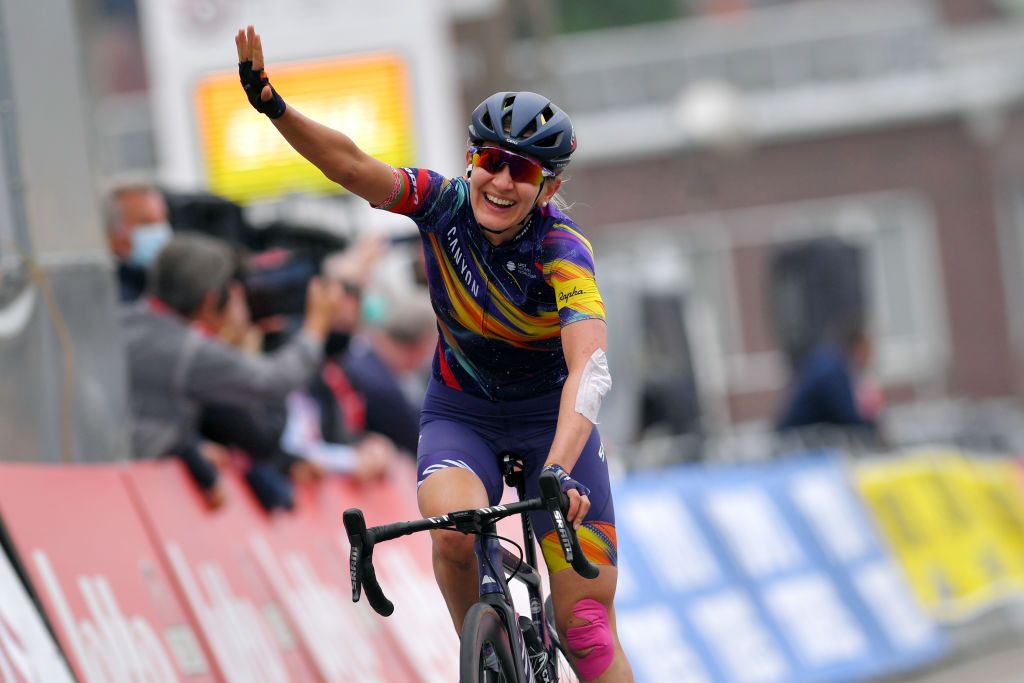 Canyon-SRAM Racing announced it has extended its contract with Alena Amialiusik through the end of 2022. The five-time road race national champion for Belarus will mark a seventh year with the Women’s WorldTour team and 10th year as a pro.

Her racing career was in doubt earlier this season with thoughts of retirement, but she said the contract extension was a culmination of three major factors – finding consistent results on the road, thriving in a stable team environment and avoiding major injuries.

“At the start of the year I thought maybe it will be the time to stop, but during the season I understood I am not ready yet,” said Amialiusik in a team press release. “I was happy with my 2021 season. Finally, I can say I am back to my level where I can compete with the strongest and this gives me even more power and confidence. The win in Belgium was a fresh breeze and makes me hungry for more success.”

At the Lotto Belgium Tour in June, Amialiusik’s late attack on a 137-kilometre stage 2 paid dividends with her first individual victory in three years, the last top result coming in 2018 with a pair of national titles in the road race and time trial. She continued the momentum with her third trip to the Olympic Games in July, followed by top 10s at the European Championships in the road race and at the World Championships in Flanders in the ITT.

“I’ve had two seasons now without heavy crashes or serious injuries. Being able to regularly train, race, and rest without rushing to come back from broken bones or always feeling like you’re running behind in fitness has been an advantage for me,” the 32-year-old said. “It’s also given me a fresh and happy head. A sense of calm where I could fully focus on my preparation and racing.”

Amialiusik began racing as a junior in 2006, and the next year scored double bronze medals in elite road events at nationals. By 2010 she was the double national champion and took the silver medal for Belarus in the U23 road race European Championships.

After her first three pro seasons on BePink and Velocio squads, she began racing for Canyon-SRAM Racing in 2016, and had has a home there ever since. Along with Tiffany Cromwell, who just renewed her contract through 2023, the pair are the only remaining two riders since the team’s 2016 debut.

“I’m one of the originals,” said Amialiusik. “Those who know me, understand that I’m the kind of person that loves stability. I have found a good team that supports me as a person and as an athlete 100 per cent. I don’t believe there is a better team for me so I have no wish to look around for something else.”

Amialiusik will return to training at the end of November after a break at home in Belarus. Her early target for next season will be the spring Classics.

“I am really looking for the spring classics. Strade Bianche and the Ardennes especially. But of course, it’s a clear goal to be a part of the team selected for the Tour de France Femmes avec Zwift.”

Canyon-SRAM announced in August that they would create a development squad with eight openings made available through an application process for 2022. Amialiusik said she is proud to be part of a team that is creating a pathway for talents from countries under-represented in the women’s pro peloton.

“I am so excited and happy with our team’s expansion. It’s a big step for us, but a very important step for women’s cycling,” Amialiusik said. “I am proud to be a little part of what is going to be a big team next year. It’s a project to help the future of many talented riders but also many young riders who are dreaming of being a pro cyclist to see that there is a pathway for them too.”

Jackie has been involved in professional sports for more than 30 years in news reporting, sports marketing and public relations. She founded Peloton Sports in 1998, a sports marketing and public relations agency, which managed projects for Tour de Georgia, Larry H. Miller Tour of Utah and USA Cycling. She also founded Bike Alpharetta Inc, a Georgia non-profit to promote safe cycling for people of all abilities and ages. Tyson has been recognized for communications excellence with 10 Phoenix Awards, presented by the Georgia Chapter of the Public Relations Society of America. She is proud to have worked in professional baseball for six years – from selling advertising to pulling the tarp – and was recognized by a national media outlet as the first female depicted in a pro baseball card set (Ft. Myers Royals). She has climbed l’Alpe d’Huez three times. Her favorite road rides are around horse farms in north Georgia (USA) and around lavender fields in  Provence (France). Her favorite mountain bike rides are in Park City, Utah (USA).