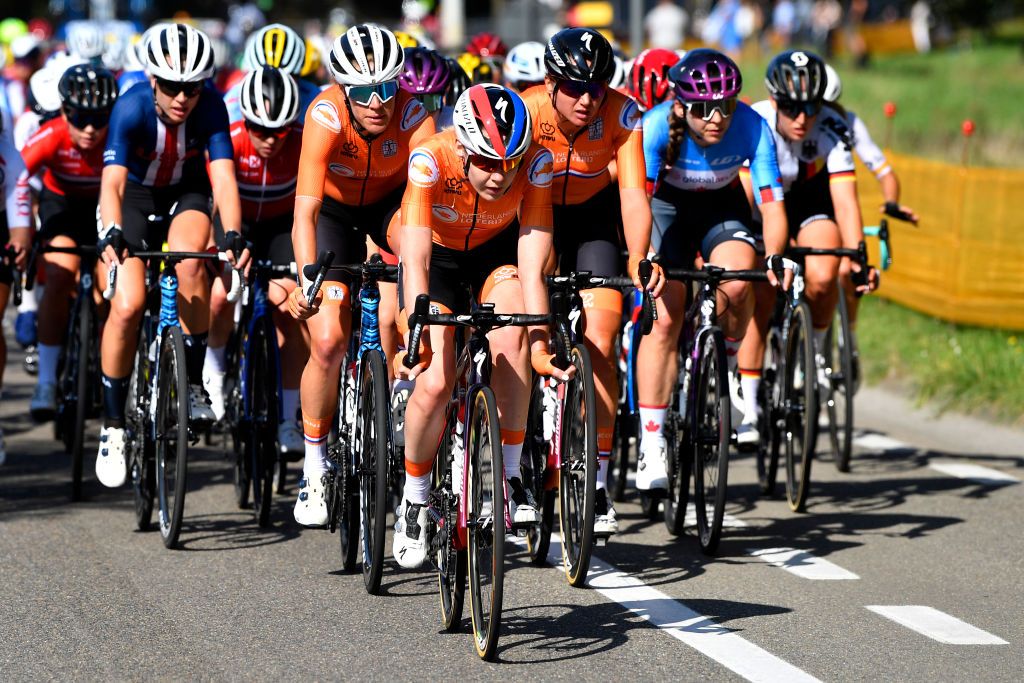 Anna van der Breggen rode her final race on Saturday in the elite women’s road race at the UCI Road World Championships race between Antwerp and Leuven. Van der Breggen is one of the giants in the sport with a impressive palmares that includes – among many other wins – the olympic road race gold medal in 2016, the road world championships in 2018 and 2020, a record consecutive seven wins at Flèche Wallonne, four overall titles at the Giro d’Italia Donne – the list goes on.

Coming into the World Championships it was clear that the 31-year-old Van der Breggen wasn’t in her best form ever. She didn’t defend her world title in the individual time trial and opted not to compete in the team time trial mixed relay on Wednesday. In the road race, she worked hard for the team early in the race for her Dutch team.

When the race was finished, Van der Breggen walked through the mixed zone with a big smile on her face as she greeted the press following the last competition of a stellar career.

“That’s it. Only these interviews and then I’m off,” Van der Breggen laughed. When asked if she’d been able to enjoy her last race, she confirmed that had been the case. “Yeah, I managed to enjoy my race. Early on, you’re focused on doing well and that worked out well. At a sudden moment, I felt that I ran out of gas and knew I would get dropped any moment; that happened, too,” Van der Breggen said.

“Then I ended up riding in a group. At first I was sad to get dropped but then I started enjoying the ride through Leuven with so many people at the side of the road. So many people were paying their respect to me, cheering me on and thanking me,” she said.

“The girls in the group were all coming up to me and telling me nice things, thanking me for my time and being an inspiration. I had goosebumps for two laps. Also, it’s not often you think about what effect your performances cause for others. That was really special. When we entered the local circuit I knew there was 35km to go and then I told my teammate that it was nearly time for holidays, also for here.”

The other Dutch women weren’t showing the smile Van der Breggen showed because the team didn’t work as well together as expected and the lead-out for Marianne Vos wasn’t at the level from the Italian team, which delivered Elisa Balsamo towards the victory in Leuven.

“It’s a pity Marianne didn’t win today. I didn’t see what happened in the final laps but it’s sad for those girls. It’s a World Championship race which we could’ve won. It was a hard race and one needs to be able to possess a lot of qualities to win here.

“Personally, it was a fantastic way to say goodbye. I’m really happy that I could do it this way,” Van der Breggen said.

Annemiek van Vleuten pointed out that she really wanted to ride the team relay together with her former arch rival, joining forces rather than fighting each other. However, Van der Breggen opted not to race in the event because of a drop in form following the Olympic Games.

When asked if she had regrets about that she clearly showed that she wasn’t ready for that sufferfest.

“I have no regrets at all about the team relay. I had to be honest with myself and that is that I’m not very good right now. I wanted to say goodbye in a pleasant way. I really wanted to ride with Annemiek and Ellen instead of riding against each other. It would not have been fun at all for me. I just couldn’t pull that off right now. That was a good choice,” Van der Breggen said with another big smile on her face.

Van der Breggen will continue in cycling as a sports director in her SD Worx team, a role that will officially begins in January of 2022.

“Next week I’ll be there for Paris-Roubaix. I don’t know if I’ll be in the team car or not but I’m sure it’s a race where I can learn a lot. It’s great to feel that it really doesn’t matter what I do on the bike from now on. And for now, I’m headed for the UCI champions gala where I’ll drink at the expense of the UCI,” Van der Breggen concluded with yet another big smile.