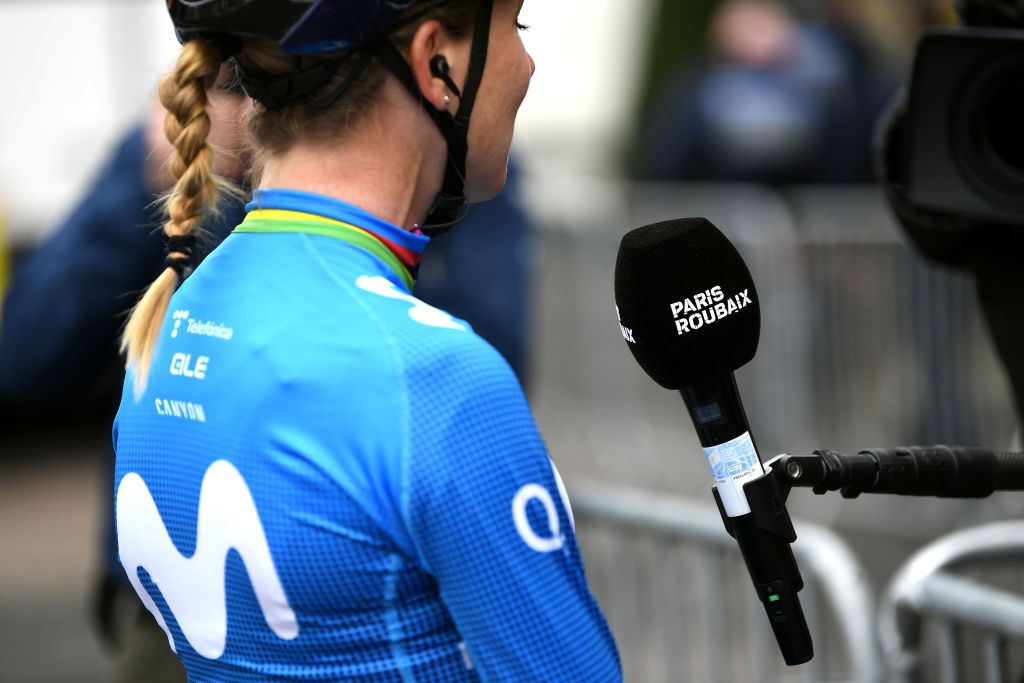 It is only a little over two weeks ago that Annemiek van Vleuten (Movistar) fractured her shoulder and pelvis in two places during a wet first edition of the Paris-Roubaix Femmes, yet she’s already been riding outside a number of times in what has turned out to be a considerably different recovery process than initially expected.

Immediately after the injury the world’s number one ranked rider had thought she may be bed ridden for weeks but instead it was only two days till she was on an exercise bike and then ten days after the accident she was outside on a bike pedalling.

“In the meantime I have already gone three times to make a round on my city bike. There I sit so upright and also on a very soft and wide saddle, that this was actually painless.

“Last Tuesday I took my first ride. After 16 kilometers I was completely exhausted, but it went! Pain is still my guide in what I should and shouldn’t do, but as long as I don’t feel pain I can load and move.”

The two-time Giro d’Italia Donne winner, who will be targeting the newly-launched Tour de France Femmes from July 24-31 in 2022, said she had a check up at the Rijnstate hospital last week.

“Everything looked good and the doctors are confident that I can fully recover from this without any problems.”

Van Vleuten has worked her way back many times, ranging from early in her career when she had surgery to rectify a problem with her iliac arteries through to a dramatic crash at the Olympic Games in 2016, where she suffered a severe concussion and three fractures to her spine, or her broken wrist at the Giro d’Italia Donne in 2020 little more than a week before the Road World Championships.

The 39-year-old has repeatedly bounced back strongly, going on to win the Lotto Belgium Tour just a month after the Olympic Games crash and taking second place in the road race at the World Championships with a still healing wrist last year.

“I get the reaction from many people that I recover so quickly, but this is only partly true,” said van Vleuten. “For every bone fracture there is simply a recovery period of 4 to 6 weeks and this time also stands for me.

“I may be a bit more motivated and less afraid to start moving as soon as I can responsibly. And then 48 hours after the fall you simply sit on an exercise bike (under the watchful eye of the physiotherapist and with the permission of the doctor of course). I do think that that way you make progress a bit faster and in any case you don’t lose a lot of muscle and condition.”