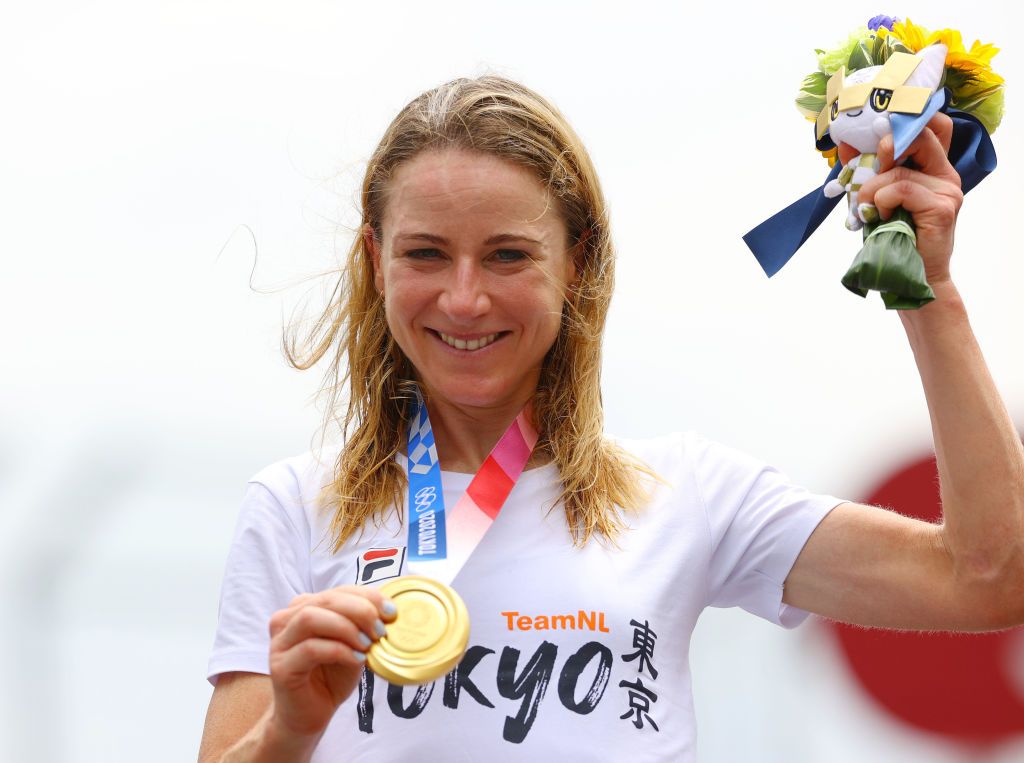 Annemiek van Vleuten (Movistar) said the Tokyo Olympic Games, where she won a gold and silver medal, completed the circle on her Olympic journey with the rider not currently looking toward Paris in three years, particularly given there is no certainty that she’ll still be racing by then.

Van Vleuten headed to Tokyo having set aside a race that is usually one of her key season goals – the Giro d’Italia Donne – to focus on training and preparing for the Olympic Games. The Dutch rider was determined to do what she could to deliver a medal, having looked set to capture one in Rio before she had a devastating crash while in the lead during the final 12 kilometres of the road race.

“The story is finished,” Van Vleuten said on the Movistar video, recorded in August and released this month. “This started maybe in the Rio Olympics with that awful fall and now its super cool to show everyone that I was able to finish it off. That’s a really nice feeling.”

The Dutch rider took silver in the road race, attacking from a chase group in the final kilometres to finish second behind the surprise winner Anna Kiesenhofer (Austria), who took gold after holding off the field with a huge solo effort.

Van Vleuten then went on to deliver a blistering ride in the time trial, taking a clear-cut win on the 22.1 kilometre course with a time of 30:13 that put her nearly a minute ahead of her nearest rival.

The 38-year-old who in 2020 committed to a two year contract with Movistar covering the 2021 and 2022 season, said she isn’t focussed on delivering a repeat performance at the Paris Olympic Games in 2024. Instead she’s now looking to her goals for the rest of this season – having already won the Ladies Tour of Norway and Ceratizit Challenge by La Vuelta since the Olympics – and also onto 2022.

“I’ll love to race next year … just pinning on the numbers without the pressure of Olympics and having really nice goals like the Tour de France for women,” said Van Vleuten in the video, which also documented her win at the Ladies Tour of Norway. “Every time they add a new race for us, it’s super motivating.”

“I don’t look at Paris. It’s also I think I will not go until Paris, or I don’t know, but I look year by year and next year I’m super motivated by the Tour de France for women. I was also quite sad to miss the Giro d’Italia [Donne] this year so that is also still very motivating for me and the Amstel Gold Race, I’ve never won, the Waalse Pijl/Fleche Wallonne I’ve never won.”

Van Vleuten, who has 86 career wins to her name – including two overall victories at the Giro d’Italia Donne, a World Championship win in the road race and two in the time trial – said her drive also went beyond securing race results.

“I still love to ride my bike, I go to Colombia next year so there’s so much that gives me energy,” added Van Vleuten. “Not just winning races but also just to explore countries, meet new people and work together with my Movistar team.”

Van Vleuten’s next race is the UEC Road European Championships, where she lines up with the Dutch team as defending champion in the road race.