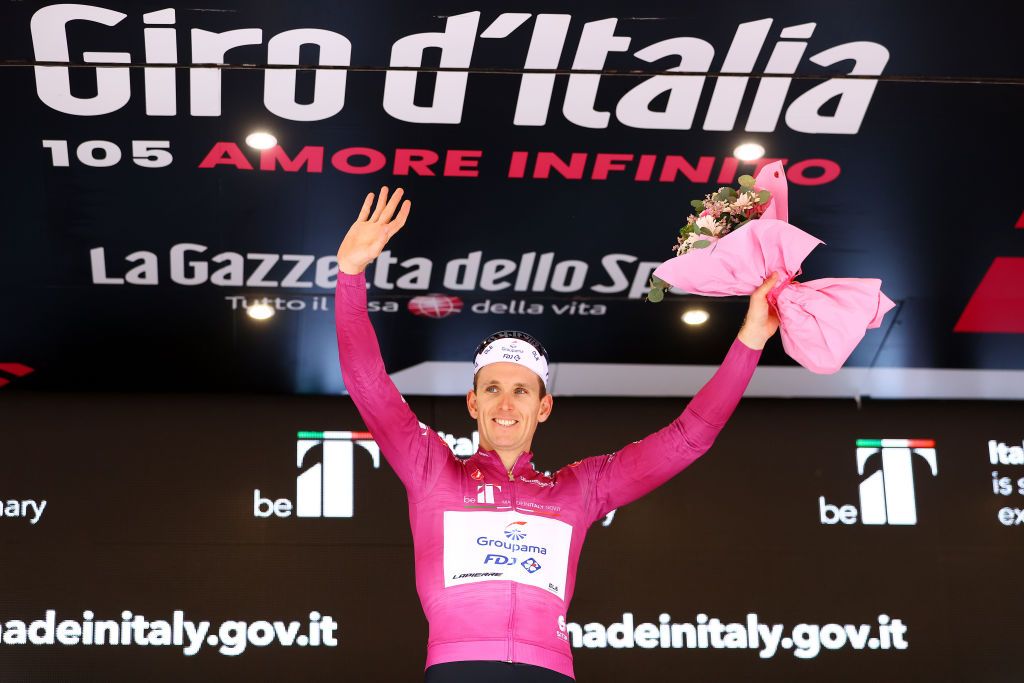 Arnaud Démare’s parents were among the crowds pressed against the barriers on the finishing circuit of stage 18 of the Giro d’Italia in Treviso, watching a pixelated feed on a mobile phone as they waited for the race to finish.

After the break swept past for the final lap, they craned their necks to check on the progress of the Giro d’Italia (opens in new tab)peloton. When it eventually came by, Démare’s Groupama-FDJ squad were duly leading the way with QuickStep-AlphaVinyl (opens in new tab), but their deficit on the four-man break was still in excess of a minute with a shade over 10km to go.

The Théorème de Chapatte holds that an escapee who enters the final 10km with a lead of a minute can hope to fend off the peloton, and it proved the case for the leading quartet here. Dries De Bondt (Alpecin-Fenix) beat Edoardo Affini (Jumbo-Visma) to the stage, while Démare had to settle for sixth on the stage, 14 seconds down.

“It’s a pity because we wanted to sprint for the win,” said Démare (opens in new tab), who was pipped to 5th place by Alberto Dainese (Team DSM).

“The break was very strong and very smart. They really played with us for a long time, they resisted very well.”

Démare’s Groupama-FDJ squad again found a solid ally of circumstance in Mark Cavendish and QuickStep-AlphaVinyl, but he decried the lack of collaboration from the other sprinters’ teams before the local lap around Treviso.

“I have to thank QuickStep for collaborating well with us, they put everyone on the front to help us chase,” Démare said.

“It’s a pity that the other teams like Bahrain, UAE and Cofidis didn’t start riding until the last lap. Obviously, I’m disappointed. But I’m also relieved because the sprints are finished, and now I can concentrate on the last two mountain stages before Verona.”

Démare’s frustration is offset by his commanding lead in the points classification.

Thanks to his stage wins in Messina, Scalea and Cuneo, Démare is some 122 points clear of Cavendish in the standings. Provided he finishes inside the time limit on the two coming days in the mountains, he is assured to wear the maglia ciclamino on the podium in Verona on Sunday.

“You can’t lose focus before Saturday evening because that’s going to be a big mountain day, but I can be proud of the work we’ve done to this point,” he said. “Now we’ll just hope we can get to the finish as quickly as possible on Saturday.”

On the corresponding stage in 2019, Démare lost the maglia ciclamino to Pascal Ackermann in nearby Santa Maria di Sala, but he returned to the Giro for the following year’s pandemic-delayed edition and emerged victorious in the competition against Peter Sagan.

Despite winning four stages in that Giro, Démare was pushed deep into the final week by Sagan. This time out, his biggest rival since the midpoint of the Giro has been the time limit in the high mountains.

“For the maglia ciclamino, it was really a bigger battle two years ago with Peter Sagan,” Démare said.

“There were only 10 points between us in the final days, so it went down to the wire. But here, it’s already been a week where I’ve had a gap.”