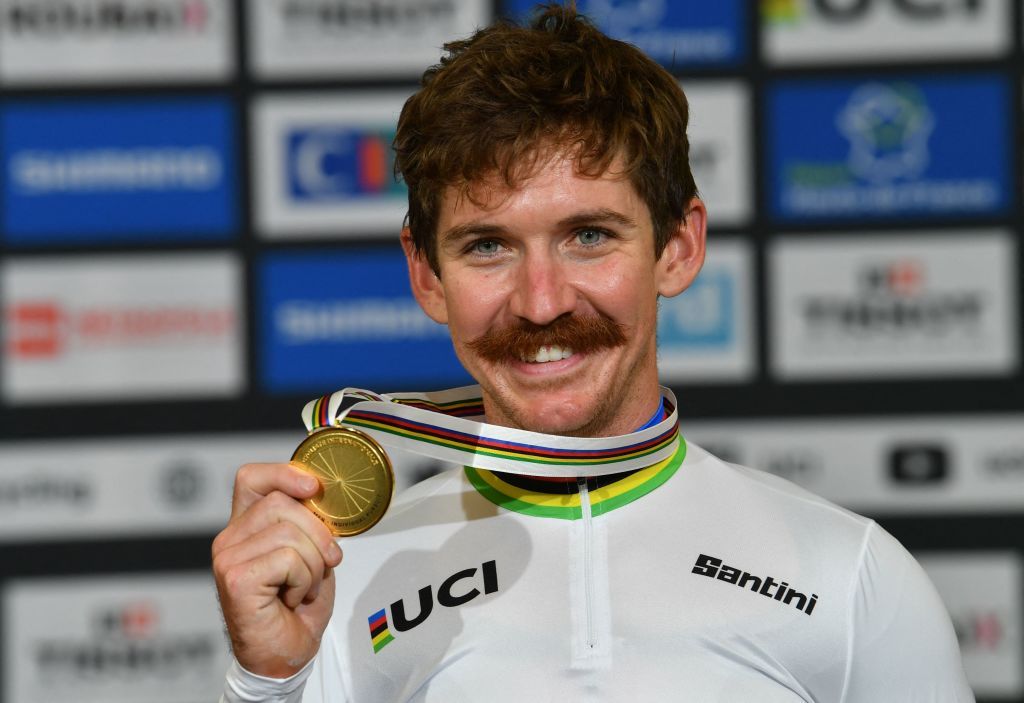 Individual pursuit world record holder Ashton Lambie added a rainbow jersey in the discipline to his palmarès at the UCI Track World Championships in Roubaix on Friday.

The 30-year-old, who became the first man to break the four-minute barrier in the four-kilometre discipline in Mexico in August, topped the timing charts in the qualifying round to head to a final showdown against Italy’s Jonathan Milan while Filippo Ganna and Switzerland’s Claudio Imhof fought for bronze.

Having gotten the better of Milan by 2.548 seconds in qualifying, Lambie once again came out on top four hours later in the final. The margin of victory was smaller, but a ride of 4:05.060 was enough to bring the Nebraskan the gold medal as he beat Milan by 1:089 seconds.

“I went out with the same schedule,” Lambie said of his winning ride after taking the win. “At the end of the day it’s a race – the time doesn’t matter and you’re just racing against second place.”

Lambie and Milan were barely separable at the midway mark after the Italian had edged ahead in the early laps. After 3,000 metres, the American was half a second ahead before pulling out his winning advantage over the final kilometres.

“With a [kilometre] and a half to go, I heard I was up by 0.4 [seconds],” Lambie said. “Then it kind of spread out the same way we raced the qualifiers, so it went according to plan. It was awesome.”

The result marks a turnaround from last year’s Worlds in Berlin, where Lambie faced off against Ganna in the final but was forced to settle for silver after riding a 4:08.048 to miss out by 4.163 seconds.

The rainbow jersey is Lambie’s latest achievement in the cycling world. In 2018 and 2019 he set the individual pursuit world record on three occasions in Mexico and Bolivia, later losing it to Ganna before reclaiming it in August.

He has won American and Pan American titles in the discipline, too, while away from the smooth boards of the track he took victory the Unbound Gravel 100 in 2019.

“Speechless again,” Lambie wrote in a post to Instagram on Friday. “It’s been a long time coming but the magic of pumpkin spice season knows no bounds. It’s coming home.”