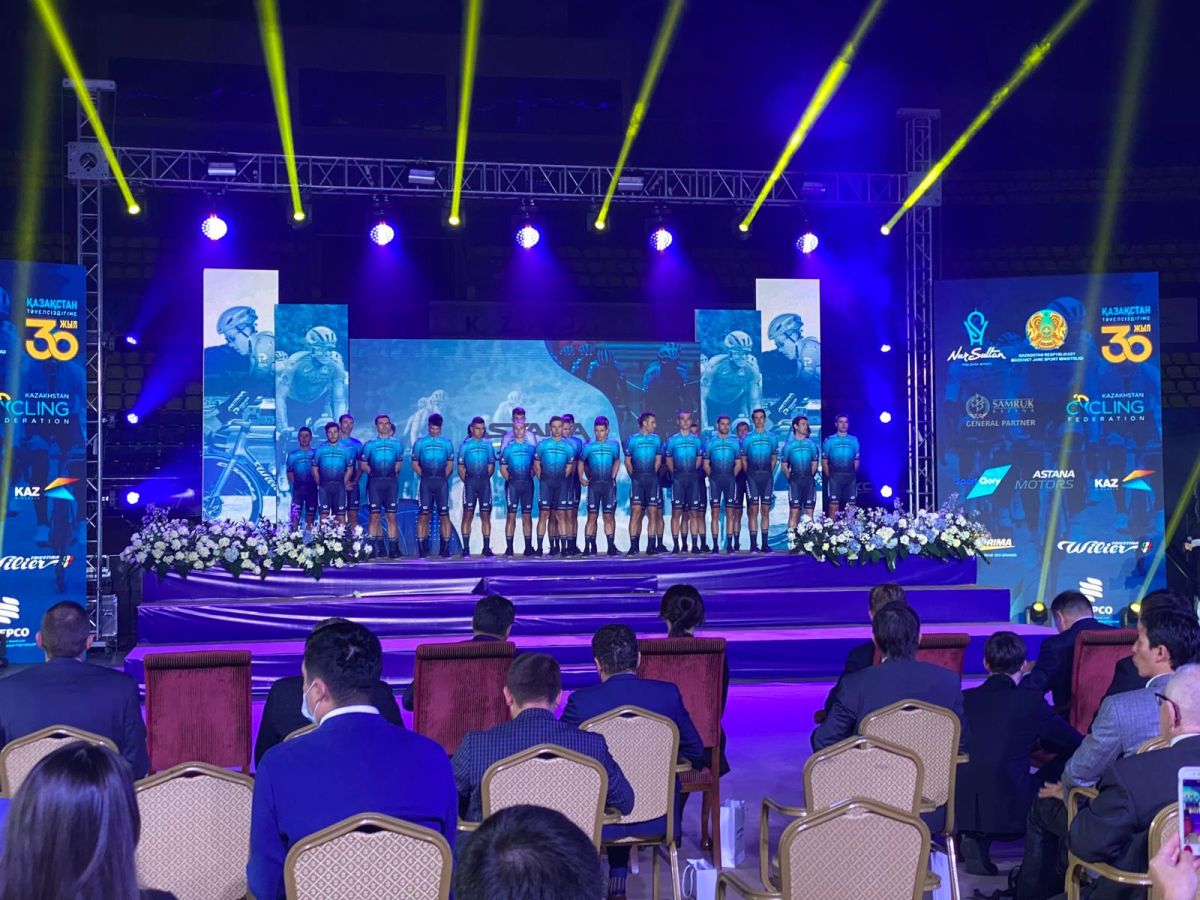 Astana Qazaqstan presented its 2022 team at a gathering at the Saryarka Velodrome in Nur-Sultan, the capital of Kazakhstan, with the 29 riders for the next WorldTour season showing off their new kit.

The design of the Giordana clothing is almost identical to their 2021 kit with the exception of the Premier Tech logo after the team fell out with the Canadian company and ended their partnership.

Presented in the new kit was Miguel Angel López, who ended his time with the Movistar Team early after a contentious Vuelta a España where he climbed into the team car on stage 20 after being ordered to stop chasing. He was lying third overall but had missed a critical split in the peloton after the Alto de Mougás while teammate Enric Mas, second overall, was in the leading group.

López is one of 15 new riders for next season, returning to the organisation after his single year away. Vincenzo Nibali also returns after five seasons away, bringing along his younger brother Antonio, while Gianni Moscon moves across from Ineos Grenadiers.

Joe Dombrowski, David de la Cruz, and Valerio Conti are among the other notable incoming names. Two neo-pros made the roster: U23 Kazakhstan champion Nurbergen Nurlykhassym and Michele Gazzoli of Italy.

The team kept half its 2021 riders, including Kazakhstan national champion Alexey Lutsenko and brought back Alexandr Shefer from Gazprom-Rusvelo as the head directeur sportif for 2022 and added Mario Manzoni to the team cars.

“Despite a difficult transfer period, we managed to gather a strong and ambitious team, with a number of riders who are able to lead the whole team in the fight for big achievements in the next season,” Vinokourov said, noting the loss of riders like Jakob Fuglsang, Gorka and Ion Izagirre, Omar Fraile, Aleksandr Vlasov and Luis Leon Sanchez.

“We lost some strong leaders, but at the same time, we gained other high-class riders. The team has a new face, but we remain the same Astana team, which is well known all over the world,” Vinokourov said.

“The return of such riders as Vincenzo Nibali, Miguel Angel Lopez and Andrey Zeits will bring to the team some additional sport stability and confidence. The arrival of Gianni Moscone, Joe Dombrowski, David De La Cruz, Valerio Conti and other guys will help to expand our interests and set new goals. And, of course, a leader like Alexey Lutsenko is the face of the team, its base.

“I am really happy to see the U23 Kazakh champion Nurbergen Nurlykhassym in our team, I hope that he, as well as all our Kazakh riders will spend a good season. Besides this, with return of Alexandr Shefer we also strengthened the positions of our sports directors group, as well as many other positions among the team staff have been strengthened too.

“I am sure that the team that we presented today in Nur-Sultan on the eve of the thirtieth anniversary of independence of our republic will be successful in the new season and will get many victories under the new name Astana Qazaqstan Team.”