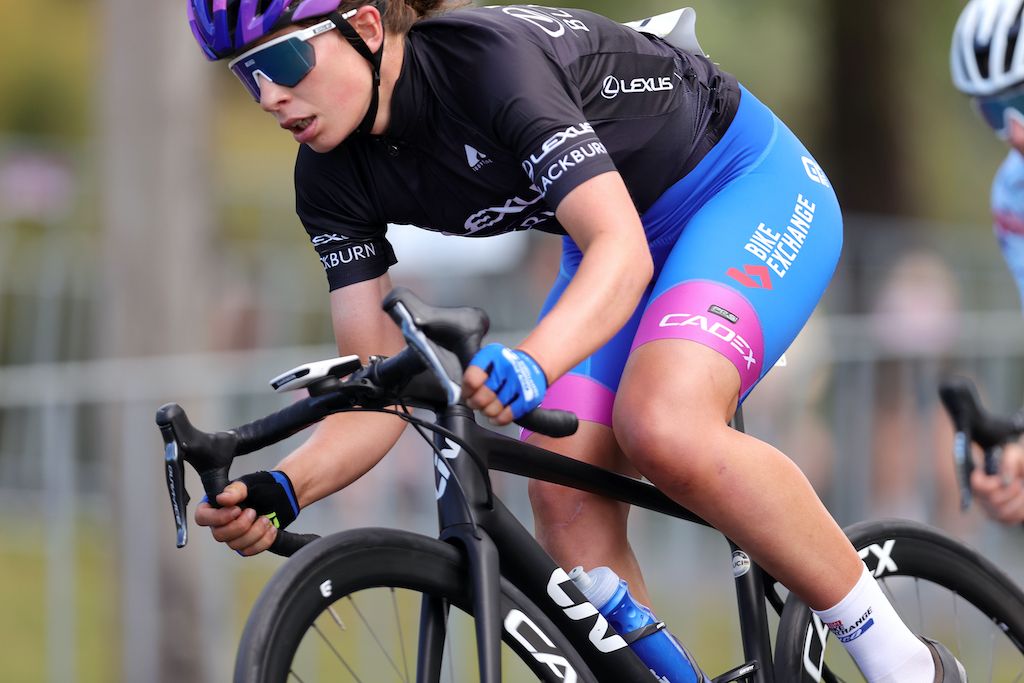 Ruby Roseman-Gannon (BikeExchange-Jayco) has shifted up to the top step of the elite women’s criterium at Australia’s Federation University Road National Championships, winning the sprint from a select bunch.

After finishing second for the past two years the 23 year old fronted up to the race as one of the favourites even though she had just one teammate, Alex Manly, for support and the closely watched rider didn’t set a foot wrong all race. She made the deciding move and then coming to the front as the line approached timed her run perfectly to hold off Josie Talbot (SydneyUni – Staminade) in the final sprint. It was then Peta Mullens (Roxsolt Liv SRAM) who swept up the final spot on the podium.

“I’ve wanted this for a very long time and to finish it off in my first ride in full BikeExchange kit means so much,” said Roseman-Gannon in an interview on SBS straight after the race. “I just can’t thank Alex Manly enough … she is the most selfless rider and I couldn’t have done it without her.”

Anya Louw (ARA Pro Racing Sunshine Coast) took her second title of the year, coming across the line fourth and as the first U23 rider in the combined field. That means she adds the criterium jersey to the collection which she started at the time trial on Wednesday.

The elite and U23 women tackled 40 laps of the 1.1km course, racing 44 kilometres on the hot dog circuit around the main streets of Ballarat, a regional city in central Victoria.

As the race started it was clear that the field wasn’t keen to give the breaks too much room to move in the early stages, with the field largely staying together. There was a crash near the front of the race catching Roseman-Gannon’s valuable ally, Manly, with little more than a third of the race run. However, it wasn’t long before she was back in the bunch and continuing to provide a strong presence as she patrolled the front of the field.

At the half-way point of the race came a determined charge from Amber Pate (InForm TMX MAKE) who was the silver medallist in the time trial, and it was enough to spur splits in the field and the brief formation of a group out the front of around eight, though with the chase on from the bunch it ultimately didn’t hold.

At around ten laps to go Emma Viotto (Giant Racing) went on the charge but it was shut down again, but the attempts didn’t end and Lisa Jacob (Knights of Suburbia) then sparked the race deciding move. A group of dangerous riders followed including Peta Mullens (Roxsolt Liv SRAM), Roseman-Gannon and Matilda Raynolds (InForm TMX MAKE). The select group of nine, which also included U23 time trial winner Anya Louw, then swelled as time trial silver medallist Pate surged across to join teammate Raynolds carrying Manly with her.

That now meant Roseman-Gannon now had her lead out in place, and she wasn’t going to waste the opportunity to step up to the top step of the podium and carry a green and gold striped jersey of the national champion into her first year as a professional.