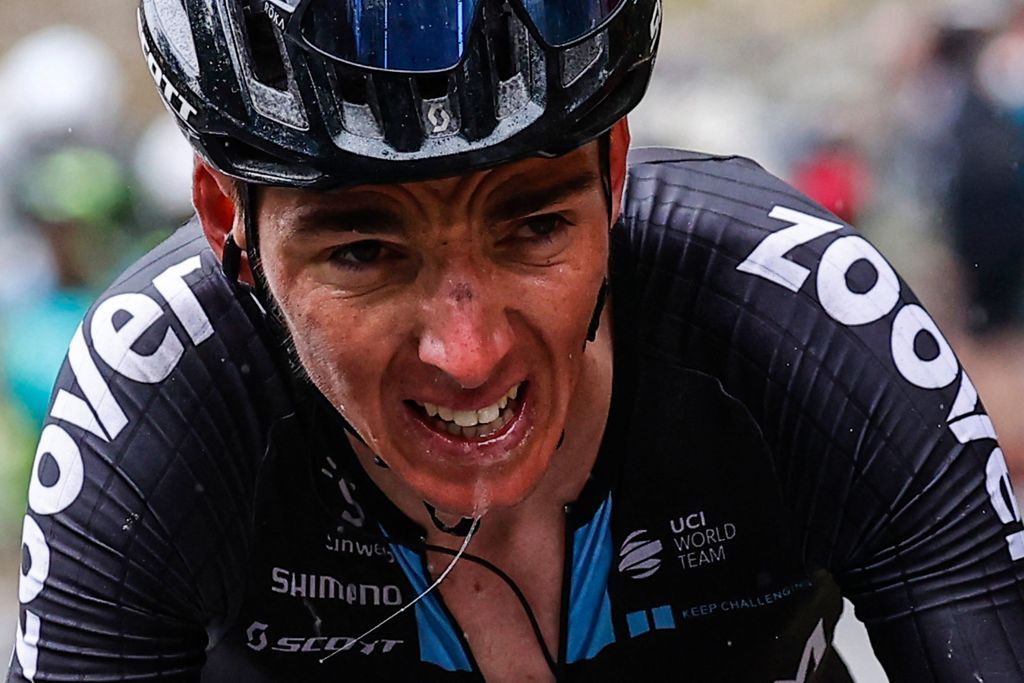 A dramatic all out attack launched by Romain Bardet and his Team DSM squad on the final mountain stage of the Giro d’Italia may have moved the French climber up the overall, but that was not enough to stem the regret that came with a near-miss in his final opportunity for stage success.

Racing the Giro for the first time at 30, on the crunch GC stages Bardet has consistently been in the upper end of the results sheets throughout. His fourth place on stage 20 behind fellow breakaway Damiano Caruso (Bahrain Victorious) has seen the Frenchman move up a spot on GC, to a highest placing to date of fifth.

Bardet, however, could not hide his frustration at losing out to Caruso after the Italian dropped him late on the final climb. He was then also overtaken by both race leader Egan Bernal (Ineos-Grenadiers) and Bernal’s mountain domestique Daniel Martínez.

It remains to be seen if Martínez, a double Colombian national time triallist, and now only eight seconds behind Bardet on the overall, will overhaul the Frenchman during Sunday’s final race against the clock. On Saturday evening, though, as he talked to reporters at the finish line of Alpe Motta, Bardet’s thoughts were almost all focussed on the stage he had come so close to winning.

“I started the day thinking I had nothing to lose, I was sixth overall and not a threat for the overall lead, and I haven’t been so active in the Giro, so it was good to get on the front and push on,” Bardet said afterwards.

“I really have to thank my team-mates for doing such a super race today. I’d really thought about going for the stage win, so I’m very disappointed.”

Team DSM had put all their irons in the fire on the stage, getting Nico Denz in the early break, then having Nicolas Roche doing a long turn on the front on the San Bernardino climb, the opening first category of the three of the day, to soften up the opposition.

On the descent, Bardet, along with his Australian teammates Chris Hamilton and Michael Storer, were the first of the GC challengers to open up a series of attacks from the main bunch, with Caruso and team-mate Pello Bilbao getting across shortly afterwards.

Hamilton helped keep the move alive before easing off at the foot of the Passo dello Spluga, the second ascent of the day, and then Storer worked hard over the top of the climb and as far as the lower slopes of the Alpe Motta.

Bardet was initially able to hold on to Caruso as the Italian tested the water with a couple of accelerations, but a third, sharper dig left the Frenchman reeling.

It was a painfully abrupt end to Bardet’s hopes of taking a stage in what is essentially the final opportunity for the Frenchman in this year’s Giro. He had taken second on Monday’s stage 16 in Cortina d’Ampezzo, but the long-distance move on Saturday was definitely his best chance.

“The team were really motivated this morning and we gave it our all so there’s no regrets” he told reporters. “I gave it everything, and I’ve gone up a place on GC.”

“But having Bahrain on the front with us was both an advantage and a problem, and I was very close, so that’s a little bit infuriating too.”

Speaking on the team’s website later, team coach Matt Winston recognised that it had been a very near miss for DSM, but praised the squad’s overall performance.

“We made a plan before the stage and we really committed to the plan to give Romain the best opportunity to move up on GC,” Winston said.

“I think you can see the commitment there in the way the guys rode. It almost came off. Not quite, but almost.”