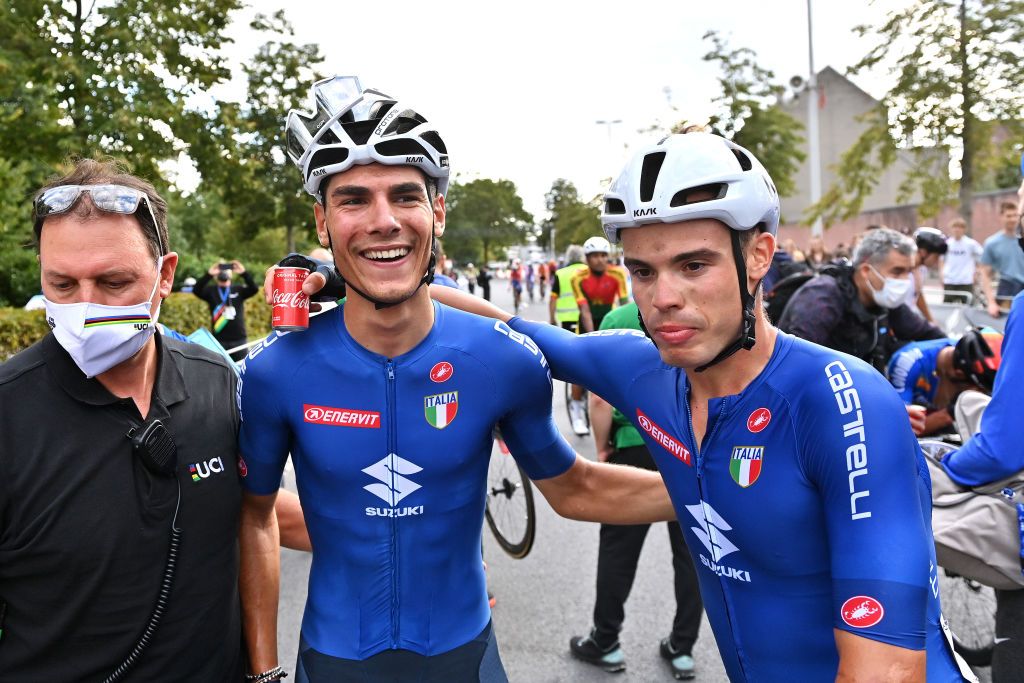 After a year out of the COVID-affected World Championships in 2020, the U23 men’s road race made its return on Friday afternoon and on the top of the podium not much had changed since Harrogate in 2019.

This time, though, the win came in an altogether different manner, with 21-year-old Baroncini soloing to the line after attacking 5.5 kilometres from the finish on the hilly finishing circuit, rather than taking victory well after the race due to a disqualification, as Battistella had done.

Still, the outcome was the same – another gold medal for the most successful nation in the history of the Worlds. It was Italy’s second gold of Flanders 2021 after Filippo Ganna’s men’s time trial triumph, and Baroncini said afterwards that the win was a dream realised.

“All day was really stressful for me. It’s a victory that is my dream for my life,” he said. “Today all was perfect for me and for my team. We attacked in the final and my attack was planned before the race. All went well.”

Baroncini, who rides for storied Italian amateur team Colpack and is currently a stagiaire at Trek-Segafredo ahead of his move to the WorldTour there next season, added the rainbow jersey to wins in the mid-race time trial at the U23 Giro d’Italia, the U23 national time trial title, and a stage at L’Etoile d’Or.

Earlier this month he took silver in the road race at the European Championships on home soil in Trento, missing out on the win to Belgian Thibau Nys. But when it came to the more prestigious banded jersey, he was not to be denied.

“Yesterday was the day to try and do the tactics for today,” Baroncini said. “The plan for my tactics was to attack in the last six kilometres and then I tried it.

“Today the tactic was not to go for the sprint for me. I just thought go, go, go and win this race. Fortunately, everything went well. It was a dream.”

Baroncini had time to celebrate at the end of his mammoth effort two seconds ahead of a charging, reduced peloton led by Eritrea’s Biniam Grmay, who became the first black African rider to take a Worlds medal of any kind in second place.

The Emilia-Romagnan has enjoyed a super-consistent run of results of late, taking sixth at the Giro della Regione Friuli Venezia Giulia, seventh at the Euro U23 time trial, second in the road race, an impressive fourth among WorldTour pros at the Coppa Sabatini, and ninth in Monday’s Worlds U23 time trial.

Sitting in the rainbow jersey following his latest triumph, he said that he has grown a lot in 2021, adding that this victory was the perfect conclusion to his season.

“For sure this year I grew a lot, also mentally. It allowed me to do all of these results. This jersey, I think, is the cherry on the cake.

“Next I will race the Ruota d’Oro, then the Piccolo Il Lombardia and then some races with Trek-Segafredo. I hope to honour this jersey to the end of the season.”