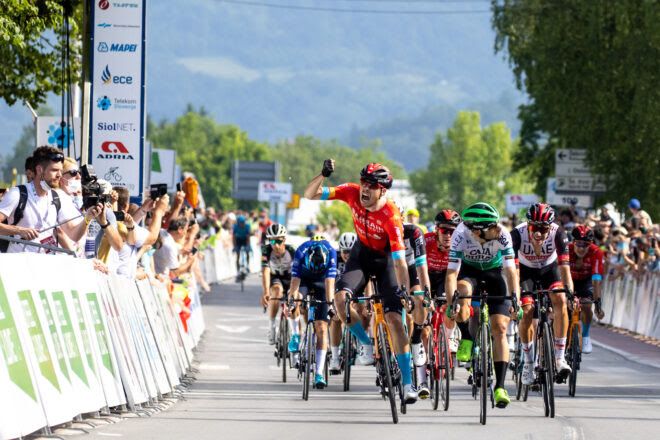 Phil Bauhaus opened up the Tour of Slovenia with a win for Bahrain Victorious, launching from a lead-out train that kept the final stages of the race completely under its control. After such a strong start the team is anticipating it won’t be the last victory celebration they get to enjoy during the five-day race.

The 151.5 kilometre opening stage of the Slovenian race started in the hills but it ended up being one for the sprinters, with the break kept under control. As the race came back together with ten kilometres to go the positioning for the sprint began, with a hectic run into the line at Rogaška Slatina.

A crash not too far from the front of the peloton at 3.5 kilometres to go caused a split, though Bahrain Victorious were comfortably lined up with the numbers near the front to lead Bauhaus out as the stage moved into the final kilometre.

“The finish was extremely fast with a slight downhill in the last km,” said Bauhaus in a team statement after his fourth stage victory of the year. “It was key to be in front at the roundabout 700m to go, and the team did a great job today. We were in the forefront all the time, we controlled the events all the time, I came to the finish in an excellent position, and as a sprinter, I couldn’t be more satisfied.”

Bahrain Victorious took over control from UAE Team Emirates at the roundabout, with Bauhaus tucked in behind teammates and rivals looking for that spot behind his wheel.  It was taken by Jon Aberasturi (Caja Rural-Seguros RGA) but Bauhaus launched from behind his teammate and held his position at the front, despite a firm challenge from the Spanish rider who made it over the line in second while Rui Oliveira (UAE Team Emirates) took third.

“It’s fantastic. The team was super strong,” said the 26-year-old German. “We took control from the beginning. My teammates did a perfect lead-out for me, and I am very proud. And I also take a win for them today.

“In the following days, there are still more opportunities to win the races, and as you have seen how our team is strong, we expect more wins.”

The team headed into the Tour of Slovenia, targeting the stage 1 sprint for Bauhaus but with the climbs on stage 2 – a 147 kilometre route from Žalec to Celje – the attention is expected to turn to riders targeting overall victory. At Bahrain Victorious that is Matej Mohorič, who is using the home race as his final preparation before the Tour de France.