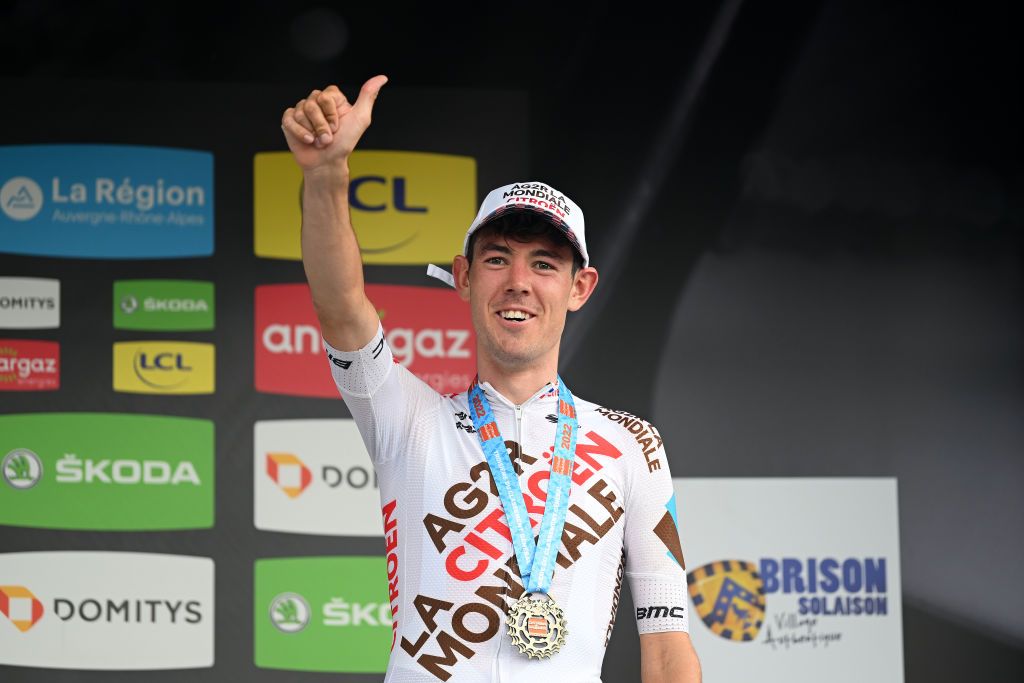 Ben O’Connor said ahead of the Critérium du Dauphiné that it was time for him to podium in a WorldTour stage race. Mission accomplished.

The Australian, who placed fourth overall at last year’s Tour de France, continued his rise in the colours of AG2R Citroën with a week of racing that will raise his ambitions a notch for this year’s Tour.

As on Saturday, O’Connor could not live with the Jumbo-Visma duo of Primož Roglič and Jonas Vingegaard on the final climb to Plateau de Solaison on Sunday’s final stage. However, as on Saturday, he was the best of the rest.

As he stood on the podium, a smile broke out across his face.

“I can be super proud of this,” he said. “Jonas was second in the Tour last year, Primož has won the Vuelta three times and pretty much every other stage race. It just means you’re there fighting with the best guys, so I can be really proud today.”

O’Connor was the last man standing as Jumbo-Visma ripped up the GC field on the 11.3km, 9% final climb. Steven Kruijswijk put in a monster turn, and suddenly O’Connor was the only rider at the head of the race who wasn’t wearing yellow and black.

Soon after, Vingegaard issued a stinging acceleration and O’Connor had to relent. However, he didn’t fall back. The two Jumbo riders rode away together but he kept them in his sights for the final 5km of the climb, crossing the line just 15 seconds down, and almost 40 seconds up on the next finisher.

“I would have loved to have been able to be with Jonas and Primož, but it was too explosive for me,” O’Connor explained.

“I tried to see if I could get back, but we just stayed the same distance. I thought I might get back to them, I still had legs, never exploded, I just couldn’t go with the first acceleration.”

Nevertheless, the Dauphiné confirms that O’Connor is continuing on his upward trajectory and perhaps at last finding some consistency in his career. He was on the cusp of a breakthrough at the 2018 Giro d’Italia but has had a rocky time ever since and only joined AG2R last season after finding himself short of contract offers.

After clinching that dream-like fourth place at the Tour, he has put together a string of results this season that reads: 7th at Rita del Sol, 6th at Volta a Catalunya, 5th at Tour de Romandie, 3rd at Dauphiné.

“All the work we’ve done as a team has paid off. We’re really not far away from fighting with actually the very best in the world, and that’s something we can be proud of.

“I just need to get to the Tour now, not get too tired beforehand, and hopefully not having too many problems in the Tour.”