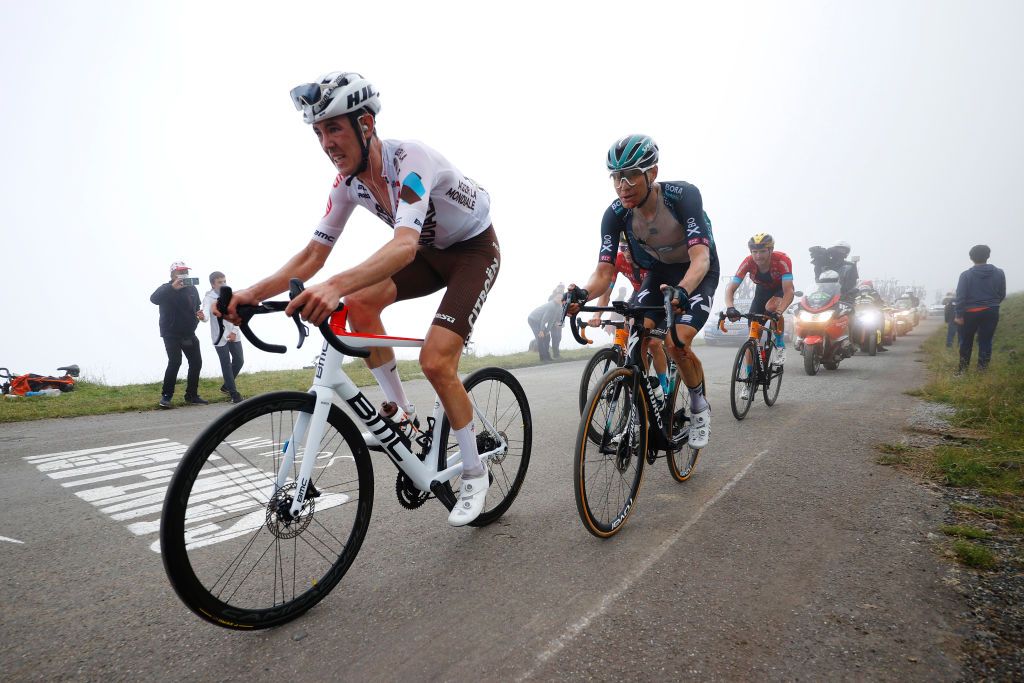 Ben O’Connor (AG2R Citroën) followed for as long as he could on the Col du Portet before he realised that sitting at the high-stakes table might involve writing cheques he couldn’t cash.

The Australian tracked Tadej Pogačar’s initial onslaught 8.5km from the finish of stage 17 of the Tour de France, but he saw the cards were stacked against him when the yellow jersey kicked again a few hundred metres later.

“Initially, the tactic was following Pogačar, and then after getting dropped by Pogačar, I said, ‘OK, I’ve got to play the second game with Urán and Kelderman’,” O’Connor said when he stopped in the mixed zone en route to his team bus.

Those instincts proved sound. As UAE Team Emirates’ Pogačar, Jonas Vingegaard (Jumbo-Visma) and Richard Carapaz (Ineos Grenadiers) – the men now most likely to finish on the podium in Paris – disappeared from view, O’Connor settled into a group alongside Rigoberto Urán (EF Education-Nippo) and Wilco Kelderman (Bora-Hansgrohe), and they worked to limit the damage as best they could.

They began the climb with designs on a podium spot, but by the time they reached the low cloud near the summit, their contest was for a place in the top five. O’Connor played his hand with a smart acceleration in the finale, and he placed fifth on the stage, 1:26 down on the winner Pogačar but 14 seconds ahead of Kelderman and 23 up on Urán.

“In the end, I thought I could try and grab a couple of seconds. Maybe I could have gone earlier, but I went through a couple of rough patches too, so I’m proud of today,” said O’Connor, who remains fifth overall, 7:34 behind Pogačar.

“It was good to grab a couple of seconds at the end. Maybe I could have gone a little earlier but that’s what it is. I still showed that I deserve to be here. I think it’s really great for the team too, because they’ve looked after me the whole week and put effort into it and now there’s a genuine reward for it.”

Professional cycling feels like an increasingly serious business these days. Some Grand Tour contenders often wear the mien of men condemned to hardship, but on both good days and bad, O’Connor seems to carry himself with a certain lightness.

“It was pretty special to be fifth up there in a mountaintop finish at the Tour de France,” he smiled. “It was a classic mountain stage today and it played pretty well for me. It wasn’t crazy hot and it’s beautiful up here. I’m just super proud to fight in the Tour de France with these big guys.”

O’Connor’s remarkable solo victory in Tignes on stage 9 briefly lifted him to second place overall at the Tour, but while he slipped off the podium on Mont Ventoux three days later, he has performed consistently ever since. The 25-year-old is just 17 seconds off Urán’s fourth place ahead of Thursday’s summit finish at Luz Ardiden, but he expressed no ambition for the remainder of the race behind holding onto a top-five spot.

“If I can keep that, that would be insane, pretty much,” said O’Connor. “I think tomorrow will be exactly the same as today, to be honest: two big climbs and more weather like this. Then the time trial is pretty simple. It’s just you and the machine and off you go.”

Asked if he was now minded to try to add a stage victory in the Pyrenees to go with his solo effort in the Alps at the end of the opening week, O’Connor shook his head. “No,” he said. “I don’t think it would be possible to do that. I think I took my chance in Tignes. I can’t ask for any more than what’s happened so far.”