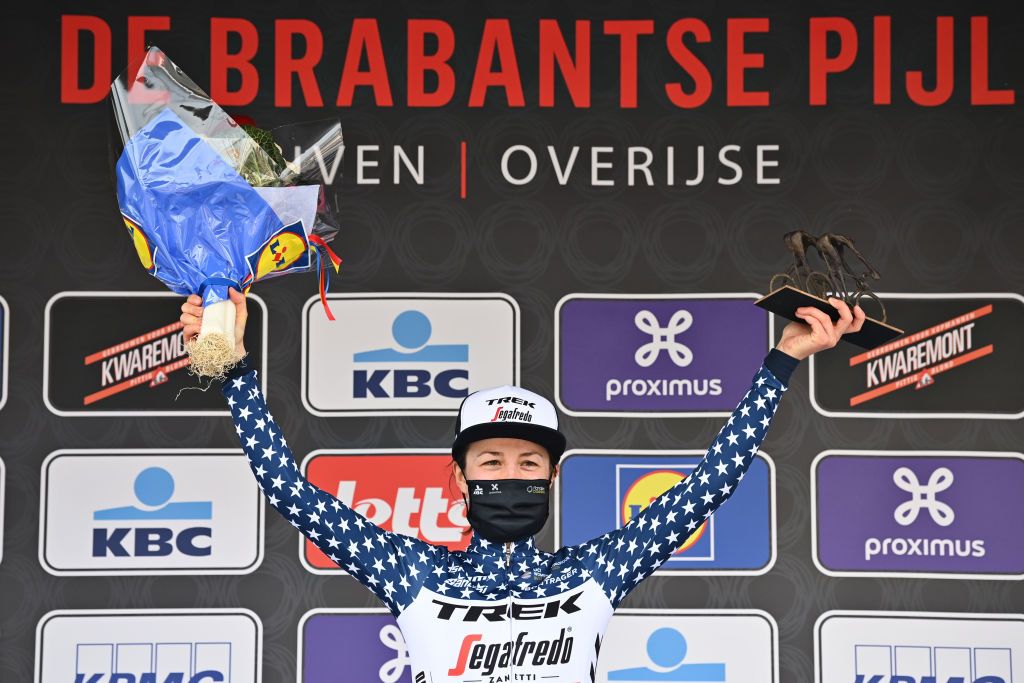 Ruth Winder (Trek-Segafredo) secured victory by a whisker following a bike throw to the finish line alongside Demi Vollering (SD Worx) at Brabantse Pijl on Wednesday. The American champion said she was surprised but delighted to have been declared the winner after race officials reviewed a photo finish of the sprint.

“I am extremely surprised,” Winder said in a post-race interview. “I came to this race really wanting to be my best, and in the end it played out really well for me. I thought Demi had it! We were sprinting and I threw my bike at the line, but she really celebrated so I thought, ‘congratulations’. She’s an amazing bike rider and just for me to be second, I was really excited. For me to win is just…yeah…

“This feels really good. The team has been very good so far, and I have had my best preparations this year that I have ever had. I am really excited that I could do it today.”

Vollering and Winder were part of a six-rider breakaway that reached the final 1.3km S-Bocht climb in Overijse. After cresting the top, and with roughly 200 metres to go, they launched their sprints off Elisa Balsamo’s (Valcar Travel & Service) wheel.

They both threw their bikes as they approached the line, but Vollering took one hand off her handlebars to celebrate victory a moment too soon, as Winder continued to follow through with her bike throw well past the finish line. The margin of victory was almost indistinguishable and the race officials used images from a high-speed camera to declare Winder the winner.

“I just had to be super patient in the finish, which was super hard for me; I really wanted to attack them all too soon!  But I had Giorgia (Bronzini, team director) in my ear and she was saying to be patient, and it worked by a centimeter,” Winder said.

The breakaway also included Joss Lowden (Drops-Le Col supported by Tempur), Elisa Balsamo (Valcar Travel & Service), Juliette Labous (Team DSM), and Leah Thomas (Movistar Team Women), who went clear of the field with roughly 20km to go in the women’s 127km race between Lennik and Overijse, and they worked well together right up to the final climb.

“At the start we had Lauretta [Hanson], Shirin [Van Anrooij], Lucinda [Brand] and Elynor [Bäckstedt] all watching the front and really making sure that we were safe. It was a really hard circuit with so many short climbs coming back-to-back-to-back on each other,” Winder said in a team press release.

“It was really hard, and coming through the finish with one lap to go I saw Annemiek van Vleuten setting up her teammate Leah Thomas, and I was keeping an eye on Leah as she’s a fellow American and really strong, so I was on her wheel.

“They created this breakaway of six really strong riders, and there were enough from the big teams, and we were really working well together right away. Everyone was committed in the breakaway to roll through.”

The victory marks Winder’s first of the season as she aims to make the final selection for the women’s road race at the Olympic Games in Tokyo. Her compatriot Chloe Dygert has automatically qualified, and USA Cycling announced the long list to also include Winder, Coryn Rivera, Tayler Wiles, Leah Thomas, Lauren Stephens, Amber Neben and Krista Doebel-Hickok. Katherine Hall was also on the long list but has since retired from professional cycling.

Brabantse Pijl is also an important race because it marks the transition from the cobbled Classics to the upcoming Ardennes Classics, and it was considered the dress rehearsal for the UCI Road World Championships, to be held in Flanders in September.

“I was pretty familiar with the parcours, we raced here last year and I have done some course study. It’s also exciting that one of the climbs will be in the World Championships this year. It was good – I really like this race,” Winder said.