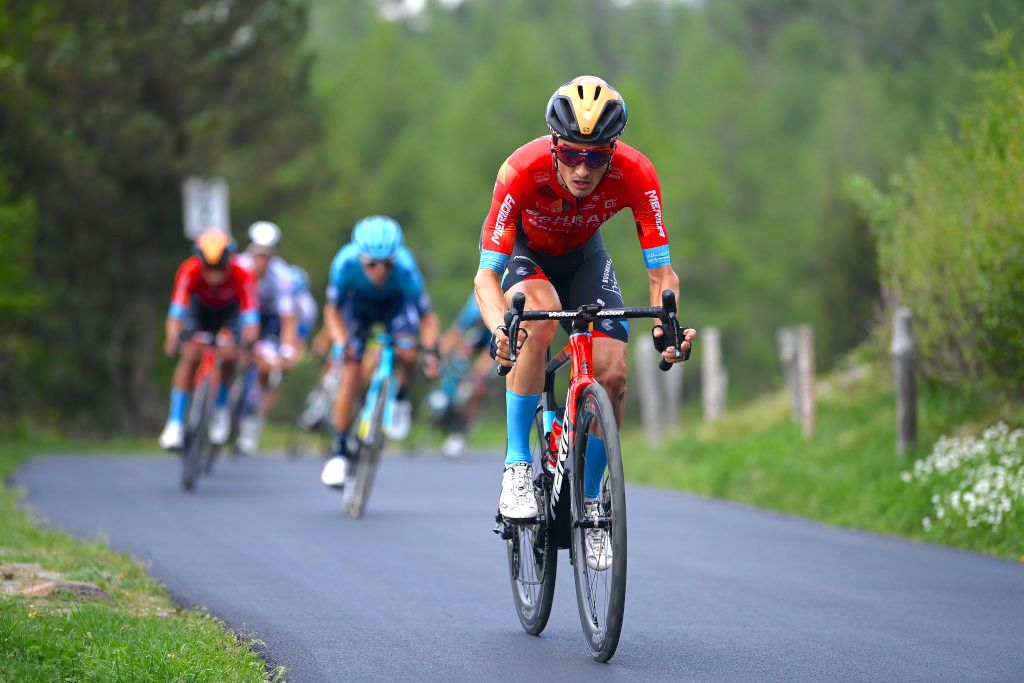 Pello Bilbao (Bahrain Victorious) says he hopes to make the most of moving on from his usual menu of Grand Tour general classification battles to go for a new target of one-races this autumn. But that change in program also means he’s already making progress at a race like the Tour de Pologne.

Ninth overall in the Tour de France last year and fifth in the Giro d’Italia both this May and back in 2020, Bilbao had been expected to take part in the Vuelta a España this autumn.

But instead of a second Grand Tour in 2022, the Basque all-rounder will shortly be concentrating on one-day racing. And after the Tour de Pologne, where he is currently lying second overall, September will find Bilbao tackling the Canadian WorldTour one-day races.

Bilbao told Cycling News his change in direction mid-term has brought him some direct benefits in the here and now, too, as he found on Monday’s tough little uphill finish in Pologne, where he finished second behind stage winner and race leader Sergio Higuita (Bora-Hansgrohe).

“I’ve been going back to my roots in that sense, by training to try to get fresher and more explosive for the one-day races that are coming up,” Bilbao said.

“Previously I’d been going for the GC rankings, so I’d focussed more on the aerobic side of things. But now I’ve really decreased the length and volume of my training rides, and I’ve been doing series, derny training and more high-intensity racing, anaerobic training and so on instead. And that benefited me here, too.”

Although Bilbao’s one big test of how he performs on the punchy climbs that he’ll be facing in the Canadian Classics went well in Pologne, he was logically disappointed not to able to beat Higuita on the line.

“I had some good support from the young guys in my team like Steve [Williams] and [Eduardo] Zambanini and I was maybe a bit too conservative and cold-blooded at the end and lost a few positions as a consequence,” he said about the climb.

“I didn’t throw in the towel, saw that the guys ahead were losing traction and almost without wanting I ended up in the front. Kind of the same way as Higuita did. Then in the last 200 metres and I lent too much on [Quinten] Hermans [Intermarché-Wanty-Gobert Matériaux] rather than following Sergio, which I should have given he was the favourite.

“It’s a pity, I was disappointed in myself that I couldn’t finish off the teammates’ work, but I was pleased because I hadn’t done any racing for quite a time.”

Just 24 hours later, Bilbao was lucky enough to miss out on the crash that saw Higuita injure his right knee, he said, but as Thursday’s time trial limbers into view, he is still not overly optimistic about succeeding João Almeida (UAE Team Emirates) in the palmares of the Tour de Pologne’s overall winners.

“I’m in a good position on GC in this race, which matters, of course,, but the time trial will be the most important element when it comes to actually getting the victory. We all know the other six stages have very little effect on the overall outcome,” Bilbao, currently four seconds behind Higuita.

“I’m very aware lots of riders behind me are big TT specialists, even if I’ll try and do the best possible in the time trial. Hopefully I can roll back the years a bit and do them as well as I used to. We’ll see. As they say, you don’t buy a ticket, you’ll never win the lottery.”

Regarding the time trial, Bilbao is perhaps a little more pessimistic than he should be, given he won the Spanish national TT championships as recently as 2020.

But should he surprise himself on Thursday’s short, uphill 11-kilometre effort, and turn in a ride that is enough to net himself the overall lead, Bilbao would be on track for an even bigger breakthrough: his first ever stage race overall victory, at the age of 32.