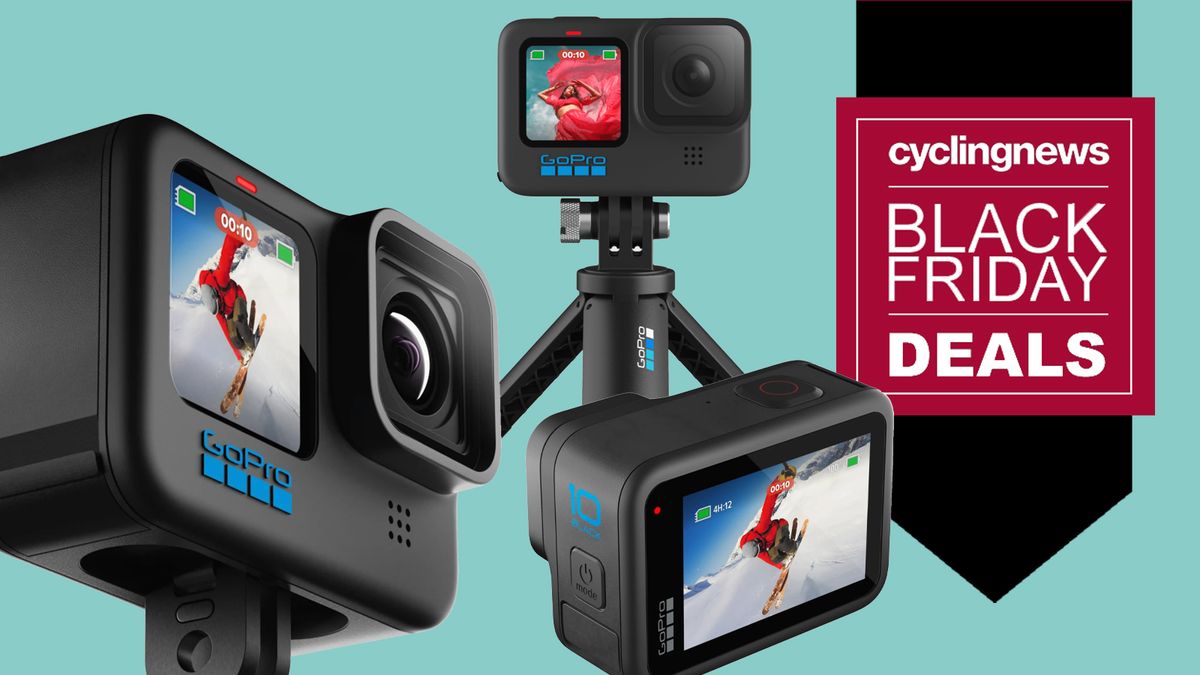 When it comes to action cameras, GoPro is at the top of the list. The GoPro Hero10 is the flagship camera for 2021 and it might be the best action camera on the market. You won’t ever find it described as cheap though. If you are thinking it’s time to upgrade, or if you are finally jumping into the action camera game, then it makes sense to look for the best GoPro Hero10 deal in 2021 among the Black Friday GoPro sales. Each year GoPro updates the lineup so there’s never a wrong time to buy but you might as well get the best price possible.

On our list covering all the best Black Friday bike deals, you can find options for saving a bundle on a new bike. Adding a GoPro Hero10 deal the same day will make it easy to share the adventures you’ll have on a new bike. Or, if you find yourself taking advantage of one of the great Black Friday Garmin deals, it’s not hard to find a mount that will handle your new Garmin computer and a GoPro Hero10 at the same time. If Wahoo is more to your liking and you decide to take advantage of one of the best Wahoo Black Friday deals the same mounts will handle dual mounting your new GoPro Hero10 and a Wahoo computer.

2021 saw the GoPro Hero10 Black come to market as the top-of-the-line option from GoPro. On the outside it wasn’t a big change at all. Some small changes to the colours and a slightly more durable lens cover. It’s on the inside that major revisions come to market with the Hero10 black.

If you look at the spec sheets comparing last year’s model, you’ll see some decent upgrades to the GoPro Hero10 black. Available frames-per-second is double what it was previously in every resolution. That means at 5.3K it’s up to 60fps from 30, at 4K there’s now 120fps available up from 60, and 2.7K lets you go as fast as 240fps when the previous max was 120fps.

What might not be as obvious is an upgraded processor. Every GoPro since version 6 has used the GP1 and one of the few complaints about last year’s model had to do with a sluggish UI owing to the old chip. The GoPro Hero10 Black brings a brand new GP2 chip and that alone makes it worth taking a look at.

Smaller upgrades are on board as well. There’s a new version of Hypersmooth to make your bumpy cycling video look glass smooth. If you don’t manage to mount the camera straight don’t worry about that either, as long as it’s less than a 45 degree tilt the Hero10 Black will straighten it out and you’ll never know.

The hardware is good but the deals to be had are all about the subscription service. Don’t worry though, it’s well worth having. For a price of £49.99/yr or $49.99/yr GoPro offers a slew of handy services.

However, it’s in the details of the subscription and the effect on camera pricing that things get a little fuzzy for the GoPro Hero10 deal this Black Friday. The rest of the year, the price for the camera is £479.99/$499.99 without the subscription or $399/£379.99 with the subscription. For Black Friday 2021 GoPro has dropped that price to £329.98/$349.98. There’s also the option of paying the same price as normal with the inclusion of accessories.

Those are both solid deals and the best available across the UK or US markets. You can find that same £50/$50 savings on the camera from other retailers but it lacks the added discount for the GoPro subscription.  If you are looking for a GoPro Hero10 black deal this year than buying direct from GoPro at a discount is the best deal around. It’s less of a good deal than GoPro makes it seem but it’s still worth a purchase.

Josh hails from the Pacific Northwest of the United States but would prefer riding through the desert than the rain. He will happily talk for hours about the minute details of cycling tech but also has an understanding that most people just want things to work. He is a road cyclist at heart and doesn’t care much if those roads are paved, dirt, or digital. Although he rarely races, if you ask him to ride from sunrise to sunset the answer is probably yes.
Height: 5’9″
Weight: 137 lb.
Rides: Look 795 Blade RS, Cannondale Topstone Lefty, Cannondale CAAD9, Priority Continuum Onyx