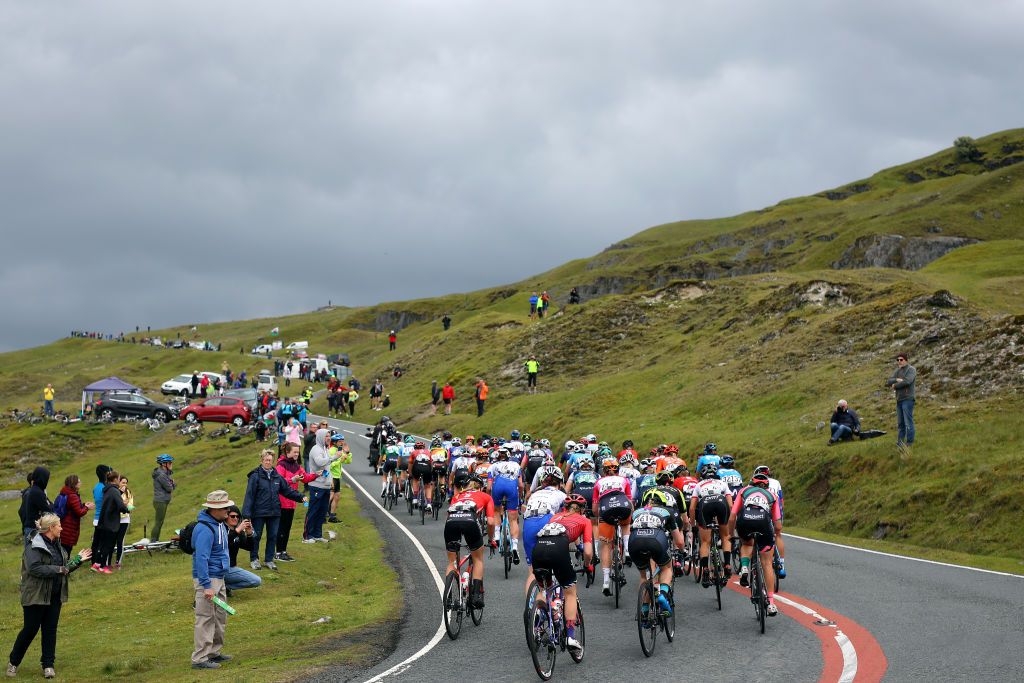 Stage 4 of the Women’s Tour was the first of two stages in Wales, and the hilly terrain delivered excellent racing with a group of three sprinting for the stage and time gaps ordering the GC ahead of stage 5 to the Black Mountain, the first-ever mountaintop finish in the British stage race that is certain to decide the overall winner.

The Women’s Tour had an uphill finish before when it finished at Burton Dassett Country Park on stage 4 in 2019, but that climb was only 1.2 kilometres in length. By contrast, the climb up The Black Mountain (Y Mynydd Du in Welsh) will be nine kilometres long, testing the peloton’s mountain legs and meaning that a climber will win the race overall.

Two such climbers are Canyon-SRAM teammates Katarzyna Niewiadoma, winner of the 2019 stage to Burton Dassett Country Park and stage 4 runner-up, and Elise Chabbey, current wearer of the green QOM jersey.

“We have a strong team here, we are motivated and that is showing in our racing. Kasia and I are now both in a good position in the GC, and Kasia showed today that she is strong. We’re really excited to go racing tomorrow,” Chabbey said after stage 4 where both riders were part of a front group for almost 80 rolling kilometres.

Niewiadoma sits in second place overall, four seconds behind stage 4 winner Grace Brown (FDJ Nouvelle-Aquitaine Futuroscope), while Chabbey is fifth in GC at 17 seconds. Having two cards to play can work out in their favour – Niewiadoma is normally considered to be the stronger climber of the two, but Chabbey must not be underestimated: A 13th place on the Lagunas de Neila climb in the recent Vuelta a Burgos Féminas and the Itzulia Women mountain jersey attest her climbing abilities.

The Black Mountain was first visited in 2019 when the final stage to Pembrey Country Park – where Friday’s stage will start – went over the climb. Elisa Longo Borghini (Trek-Segafredo), third on stage 4, remembers the first visit well: “It’s a good finish; I have good memories from 2019 with Lizzie (Deignan) because we broke away on this stage, and she won the Tour, so let’s see what tomorrow brings,” the Italian champion said.

Longo Borghini is six seconds behind Brown on GC. She will be her team’s leader on the queen stage and has often placed well in stage races, but the long climb may be just a bit too much for her to challenge for the overall victory.

Brown herself is in the lead of a WWT stage race for the second time after winning stage 1 of the 2021 Vuelta a Burgos Féminas where she eventually finished seventh overall after a ninth place on the Lagunas de Neila. It is to Brown’s favour that The Black Mountain is shorter than the Spanish climb, and the yellow leader’s jersey will give her extra motivation.

“Obviously, I want to be up there on the final climb, I think that’s what it’s going to come down to. I’m happy now that I’ve got a little bit of buffer and time, if I finish with the top climbers then I can hopefully retain the jersey,” Brown said after stage 4.

Other than Niewiadoma, the biggest threat to Brown will be Ashleigh Moolman-Pasio. The South African veteran retires from cycling after the 2022 season, and winning a WWT stage race is one of the goals she has yet to reach. The 36-year-old lost ten seconds plus time bonifications to Brown, Niewiadoma, and Longo Borghini on stage 4 and is 18 seconds behind the yellow jersey, so she has to go on the attack to win.

There is also Team BikeExchange-Jayco’s Kristen Faulkner to consider. During her first full European season in 2021, the Alaskan impressed with a sixth place on the Norefjell mountain stage and a third-place overall in the Ladies Tour of Norway. She is an attacking rider and has to make up a 46-second deficit to Brown, promising an exciting final climb.

Last, but not least, the EF Education-TIBCO-SVB duo of Veronica Ewers and Krista Doebel-Hickok will want to play a role, too. Ewers was part of the front group on stage 4 but, like Faulkner, lost 36 seconds plus time bonifications to Brown in the end. Doebel-Hickok finished with the peloton. Both are more than a minute behind Brown and will have to race aggressively if they want to go for the stage or GC victory.