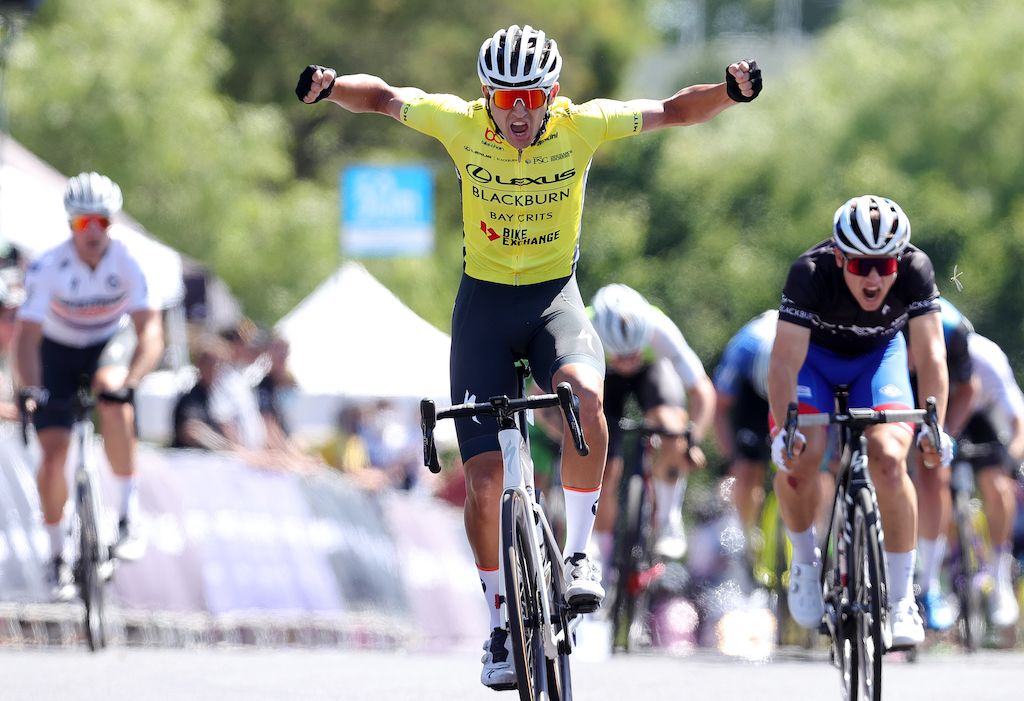 Blake Quick (InForm TMX MAKE) was again the fastest in the sprint at the 2022 Lexus of Blackburn Bay Crits, taking the elite men’s stage 2 victory and overall win after he managed to hold firm at the front in the final metres of the uphill sprint.

The stage 1 victor came through the last corner at the front and carried the speed through to the line for a clear cut win. Jensen Plowright (Lexus of Blackburn) came second while it was then Quick’s experienced teammate, and former winner, Brenton Jones (InForm TMX MAKE) who rounded out the podium.

“A really good way to start the year,” Quick said in an interview on SBS immediately after the win. “I can’t thank the guys enough. Having Brenton in front of me makes the world of difference as he’s got such a great wealth of knowledge, especially in sprinting and races like this. It makes a big difference.”

The Bay Crits marks the start of Australia’s summer of racing, which this year has again been impacted by the COVID-19 pandemic but still includes the Australian Road National Championships starting Wednesday and then moves onto the domestic racing at the Santos Festival of Cycling. The Tour Down Under replacement includes four days of National Road Series racing for the women, starting from January 23, and then for the men, starting from January 26.

The block of racing provides an all important opportunity for Australia’s domestic riders to make a mark, particularly with a swathe of cancellations across the domestic calendar for the past two years and the degree of difficulty in finding opportunities to race overseas in the midst of the pandemic and border restrictions that were put in place as a result of it. The 21-year-old Quick, who had a short stint with Trinity Racing in Europe in 2021, is keen to follow the path of riders like Luke Plapp, who has signed for Ineos Grenadiers, and find a stepping stone to the WorldTour.

“Hopefully as soon as possible,” Quick told SBS when asked how long it would be till he was over in Europe with a professional contract. “But I’ve got to get the results to get that, so hopefully not long.”

Quick made the most of his first two opportunities of 2022 to deliver those results on the 1.9 kilometre Eastern Garden’s course in Geelong, which ran in the reverse direction on stage 2 of the Bay Crits, creating some steep rises.

It was an aggressive start to the racing in the final stage with numerous breaks of two and three riders and around the half-way point it was Bentley Niquet-Olden (Oliver’s Racing) and Bjorn Williams (Footscray) turn to take their chance out the front. It wasn’t long until the Oliver’s Racing rider proved too strong for his break companion, taking his chances solo, however a corner brought him undone as he clipped a pedal and the field came back together again. That opened the way for a new round of attacks.

It was then a substantial gap for Liam White, in the regularly visible green of Olivers Racing, and Dalton Stretton (All Stars). The pair drove the pace and held a gap right through to the 50 minute mark, which signalled three laps to go. It was at that point that White struck out alone. Stretton was quickly caught by the closing field and with the pace on, as ARA Pro Racing worked hard to pull back the gap, it wasn’t long before White too came back into the fold.

Simon Clarke (All Stars) then quickly took his chance, passing the line as the bell rang to signal the final lap with a small gap. He couldn’t, however, hold off the determined chase of the sprinters teams which split the bunch to pieces as the finish line approached.

In the yellow jersey of the leader, Quick rounded the final corner out the front and continued to push the momentum through the rise to the finish line, where he got the chance to celebrate victory for a second day in a row.