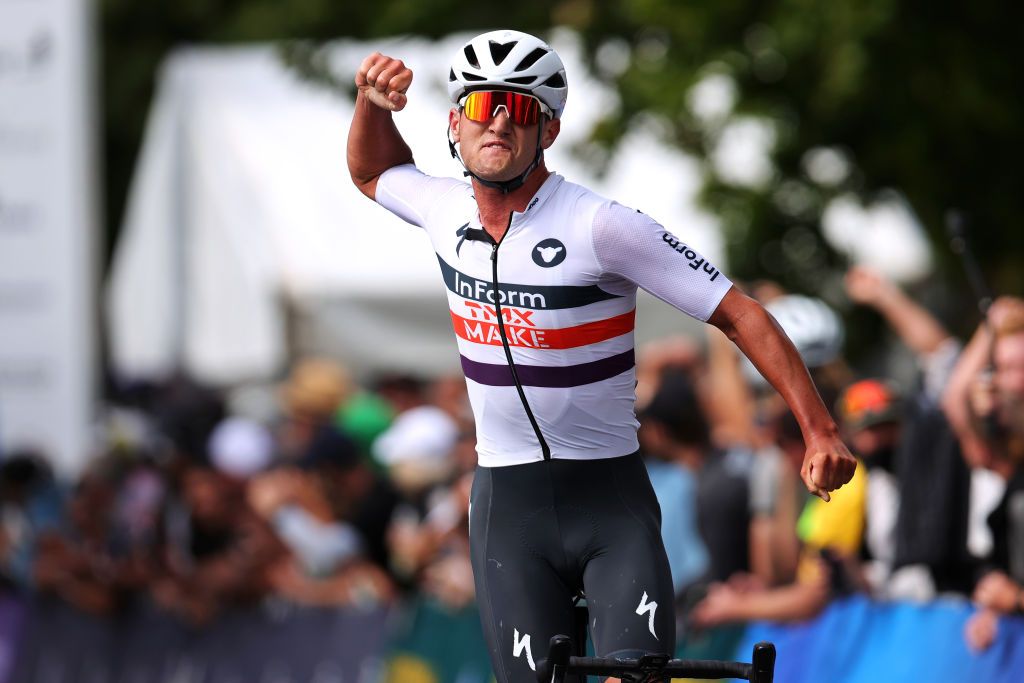 Blake Quick (InForm TMX Make) took out the win the U23 men’s road race at the Federation University Road Championships in Buninyong, using the speed that saw him take a clean sweep at the Bay Crits to take the victory from a small, teammate heavy, lead group.

The race was run in fine but, by Australian summer standards, mild conditions with the moves out the front coming early and changing composition throughout. During the race Quick used his speed to bridge from the peloton to those ever changing front groups and then cranked up the pace on the run in to the line to beat Matthew Dinham (Team BridgeLane), who rolled over a bike length back. Tristan Saunders (InForm TMX MAKE) took out the final spot on the podium after working hard to put his teammate in prime position.

“I can’t believe it. It was a bit of a long shot,” Quick said after the podium presentation. “I came here with some good form but to be honest I definitely could not have won this without the team.”

“I gambled a bit and I went early. I wanted to get ahead of Matt Dinham and put the BridgeLane boys under a bit of a pressure and leave Carter [Turnbull) and Rudy [Porter] behind to follow but when I went across I bridged to James [Moriarty] and James rode me across, and Tristan and Ferg [Fergus Browning] just pulled the whole time in the break. It was an unbelievable team ride.”

An early crash involved a large swathe of riders, also denting the numbers of Inform TMX MAKE but with 12 on the start list it still wasn’t enough to stop them being a dominant force throughout the race. The team took four of the top six positions, with Turnbull just missing out on taking a podium spot for a second year in a row and last year’s second placed rider, Porter, came sixth.

The race played out on a course which starts and finishes in the small town of Buninyong near Ballarat with the riders taking on 12 laps of the circuit, which includes the Mount Buninyong climb, to race a total of 139.2 km.

With eight laps to go the two groups were pulling closer on the Mount Buninyong climb, combining after the top to create a force to be reckoned with, as the numbers swelled to 14.

It didn’t stay as a stable cohesive group though, with some riders charging ahead – including Ben Metcalfe (Team BridgeLane) who delivered a long solo effort out the front – others dropping off and then others, like Quick, bridging.

As the laps ticked down the peloton started to splinter and groups at the front were regularly splitting and reforming. As the bell for the final lap rang there were nine riders out the front in prime position, three leading and another six close behind chasing, with the next bunch just a little less than a minute back.

On the final run into the line Saunders was leading teammate Quick and Dinham in while Turnbull also bridged across just before Quick opened the sprint, at around 150 metres to go. Dinham was fast to try and latch on in pursuit, but the 21 year old InForm TMX MAKE rider held his position out the front and added a national title win to his two Bay Crit stage victories.