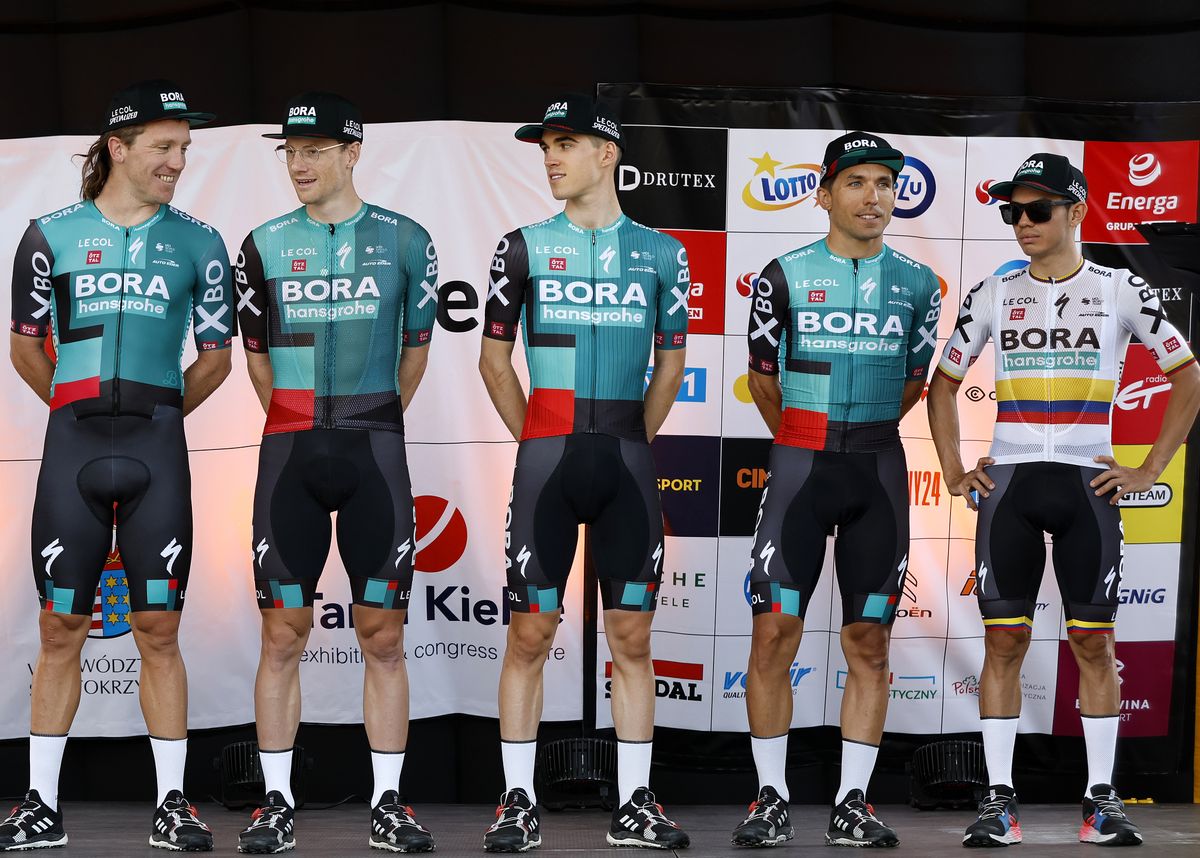 As the dust settles on the Tour de Pologne and the Vuelta a Burgos drew to a close on Saturday, teams began deciding their final line-ups for the rapidly approaching Vuelta a España.

Primož Roglič is back training and Jumbo-Visma, after winning the Tour de France, will soon have to decide if Roglič leads their team for a fourth straight year and if he can win a third consecutive Vuelta. But what about Bora-Hansgrohe, the other team to win its first-ever Grand Tour this year?

Following their victory in the Giro d’Italia, Bora-Hansgrohe will field Sergio Higuita for the GC  in the Vuelta and almost certainly, although his exact mission has yet to be decided, the Corsa Rosa winner Jai Hindley.

But what about sprinter Sam Bennett and other riders. The Irish sprinter is gradually returning to his best form but fears he may miss out on selection for the Vuelta a España after not securing a place at the Tour de France.

Aleksandr Vlasov has been ruled out by a back injury but senior sports director Rolf Aldag told Cycling News that the team’s Vuelta lineup is a puzzle of many pieces and many considerations.

Having succeeded at winning their first Grand Tour far earlier than expected this May, the Vuelta could now become both a test ground for future three-week racing strategies, as well as a target in itself.

Apart from Higuita, Aldag is not ruling anybody out or in just yet, saying that Bora-Hansgrohe has multiple choices in different fields. These range from the points jersey to the overall classification. When it comes to rider selection, it’s really a question of weighing up how much importance is given to each goal.

“We do have world-class riders in every area, with Sam Bennett in the sprints. Then of course there’s the GC. So the long list is pretty long, and we’ve got lots of options,” Aldag explained to Cycling News.

“At the same time, we are in a transition towards GC racing, and the team manager Ralph Denk made it pretty clear what we are aiming for. Winning a Grand Tour was a three-year project but we did it May. So that also gives us the freedom not to have to chase something we’ve already achieved. It’s that’s a pretty luxurious situation to be in.

“There’s a lot of learning still to do though, so it might be interesting to learn [at the Vuelta] just how to combine a sprinter’s team with GC goals and see what type of riders you need.”

Bora-Hansgrohe went full-on for GC in the Giro and in the Tour, meaning Bennett and any other sprint options were excluded.

“So why not try for it to see how it plays out?” he asked rhetorically.

A further complication to the puzzle is that the Vuelta has plenty of mountain stages but also has more flat stages than in recent years.

“This year there are five or maybe even six. So it does make sense to look at that and not forget about it,” he suggested.

Asked directly whether they would go for the red leader’s jersey, and the green of points in the Vuelta, Aldag jokingly responded: “Just look how easy that was in the Tour!” indicating Jumbo-Visma’s double success with Jonas Vingegaard and Wout van Aert.

“Of course it happened, but  it was exceptional this July. Wout van Aert is just from another planet, the way he rode. So ‘copy and paste’ from Jumbo is definitely not what we’re capable of doing or what we want to do.”

Aldag has personal experience of fighting for green and yellow back from when he was in Telekom in 1997, when Jan Ullrich claimed overall victory and Erik Zabel went for the points jersey.

According to Aldag, the only conflict really arises between the two goals if a team has the overall leader’s jersey. The other side of that equation is if the opportunity of the race lead arises.

“How many teams can afford to say: ‘We’ll wait if we have the chance of the jersey because we want to win sprints.’?” Aldag asks.

“That’s why it gets interesting trying to work out what the strategy will be and who your riders should be.”

Yet another factor in the whole equation of the Vuelta a España this year for Bora-Hansgrohe is the opening team time trial, which is, by modern standards, a long one.

Given the way Grand Tours have recently been won and lost recently by comparatively small gaps, time lost or gained in that early test could be critical come the final reckoning on September 11 in Madrid.

“It’s long for the prologue but things are so tight now on GC,  it’s very hard to make up a three minute time loss and that defines the overall strategy, too,” Aldag said.

”So the team time trial is a super stressy day for everyone, but I don’t think it’s the biggest problem in the Vuelta for us.”

Priority number one, he says, is “keeping the stress levels low in general, in a race that’s always super, super hot and where the transfers are very long.”

“You do that by keeping the riders cool, handing out drinks, really simple stuff well to make sure they don’t freak out on the bike, [saying] ‘I need water, I need water, I need ice.’ Giving them the right structure. The most important thing to do is to keep the stress levels as low as possible to start with.”

That begins with an early decision on the final team selection. Bora-Hansgrohe have raced in Burgos, Pologne and the Sazka Tour in the Czech Republic and so the decision about the Vuelta eight-rider line-up will most likely happen after the Sazka Tour races end on Sunday.

Some general rules do apply in a selection procedure, Aldag says, the first being to explain it to the riders to ensure it won’t be an issue.

“People do get their heads around why they are or aren’t selected” he said. But it’s also true, as he’s explained, that the sooner it’s sorted, the better for everybody.

“So we will give it until after the three races, Burgos, Pologne and Sazka, and then decide.”

After which Bora-Hansgrohe will fully concentrate on how to achieve their goals in the Vuelta.