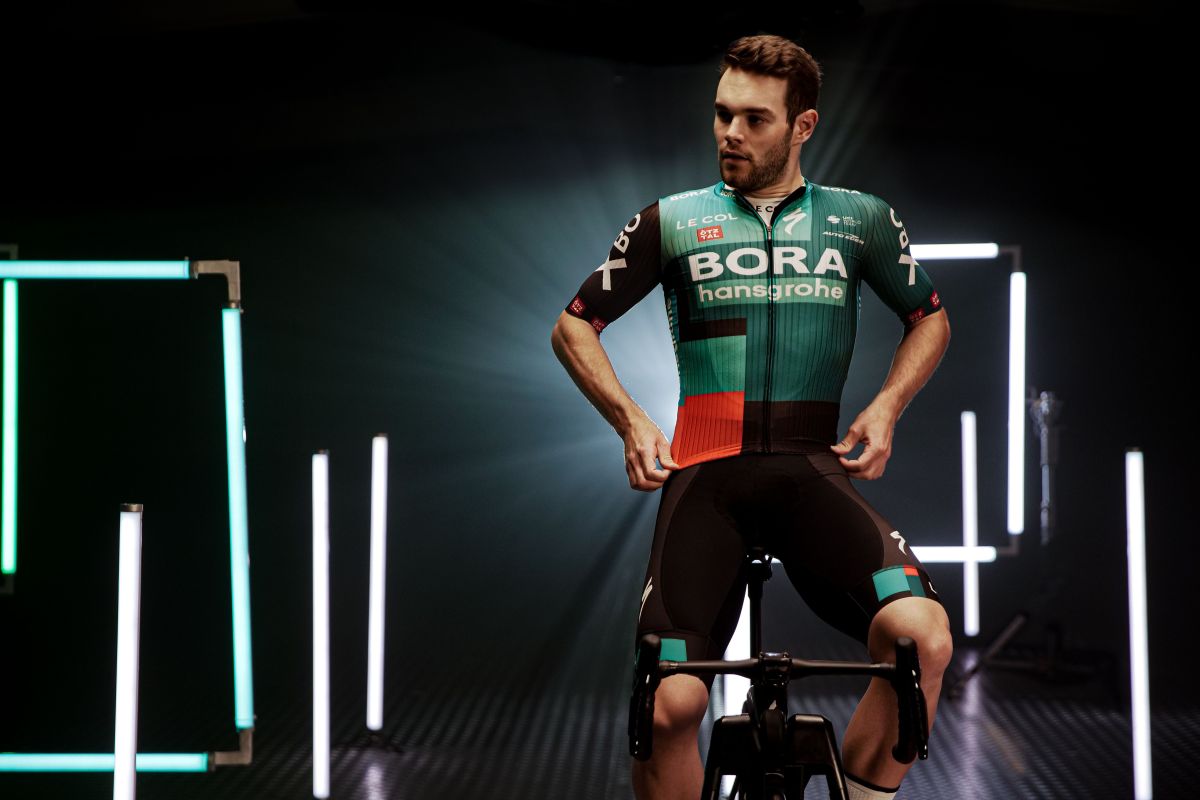 Bora-Hansgrohe have unveiled a new kit for the 2022 season, with a dark green designed that’s said to be inspired by US college sport.

British company LeCol has replaced Sportful as kit supplier to the German WorldTour team, who also enlisted Specialized’s design department to help with the new look.

The new design is based on the green colourway that has adorned the team’s kit in flashes since their rise to the WorldTour in 2017. It previously appeared in a chevron pattern on an otherwise black or white jersey, but the 2022 design sees it take over the jersey, building on the special-edition darker green chequered jersey for last year’s Tour de France.

Whereas that jersey was said to have been inspired by chess, the 2022 kit is a nod to the imagery of US college sport, particularly baseball, according to team manager Ralph Denk.

“I have to admit that at first, I may have been a little sceptical, but the results ended up being very convincing,” Denk said.

The jersey features a range of colour panels, which contribute to an off-kilter and unorthodox look.

The dark green base is lifted by sections of turquoise, notably on the right collar, while there is plenty of black, including the whole right sleeve and a panel at the bottom of the jersey. There are also flashes of red, not just from minor sponsor Otztal’s logo but in the form of a square at the bottom right of the jersey, extending down from smaller panels of black and turquoise.

The shorts are largely black but the trim features square panels of dark green, turquoise, and red.

“We look at historical moments within professional sports to draw our aesthetic,” said Specialized’s senior concept designer, Kayla Clarot. “Moments where bold color contrast and beautiful typography stood the test of time for teams that will always be known as the greats.”

The new kit marks a departure for Bora-Hansgrohe after five years with Sportful. The Italian brand has a close partnership with Peter Sagan, who is leaving the team and heading to TotalEnergies in 2022.

LeCol, founded by former rider Yanto Barker, have stepped in, returning to WorldTour sponsorship after previously supplying the Bahrain McClaren team in 2020.

“Over a decade’s worth of research has gone into the package of kit we have pulled together for the Bore-Hansgrohe team,” said Barker, with Denk apparently convinced of the results.

‘The focus is not only on looking smart, we also want to be fast,” said the team boss. “During our wind tunnel tests in winter, we compared our new kit with competitors’ products, and I can say that we will be fast, very fast.”

The team also unveiled their new Specialized bikes on Wednesday. The S-Works Tarmac SL7 models are painted in a similar colourscheme to the kit, with a black base and flashes of green and red.

The new look as a whole has been termed ‘no off-season’, which is said to relate to the camaraderie within the team that “takes no hiatus”, according to Denk.