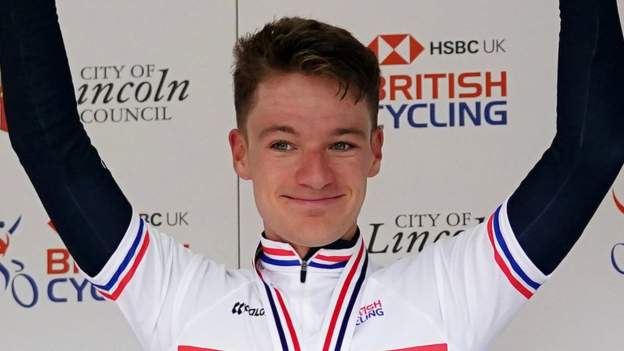 While it was an unforgettable day for the Hayters, their family was not in Lincolnshire to watch after their father, Tim, tested positive for Covid.

“He’s all right, but is stuck at home. It’s a shame as both of us won, but I’m sure they will celebrate,” Ethan said.

Ethan, 23, who claimed silver in the madison race at this summer’s Tokyo Olympics, maintained his impressive form to produce a ninth victory of the season ahead of Ribble-Weldtite pair Dan Bigham and James Shaw.

Hayter completed the hilly, 44.7km, three-lap circuit through Tealby, Lincolnshire in 56 minutes and 41 seconds, with Bigham 37 seconds slower and Shaw 50 seconds off the pace.

“I was kind of favourite coming into this, but I don’t think he [20-year-old brother Leo] was, so that was a really nice way to start the day to come down and see him,” Ethan said.

Meanwhile, Anna Henderson claimed the elite women’s title ahead of Joss Lowden, who made history in September bybreaking cycling’s hour record for women.