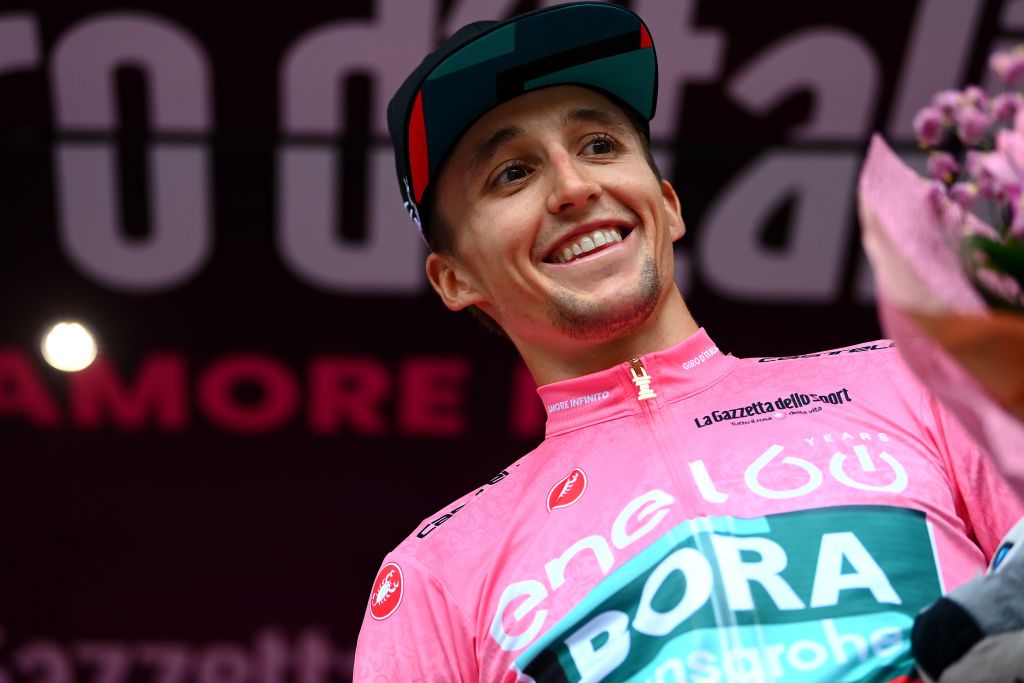 Cadel Evans learned from Cycling News on Tuesday that the first Tour de France Jai Hindley has ever seen ‘live’ was back in 2011 when Evans himself powered to the victory. That knowledge made the elder Australian’s sense of ‘passing on the Grand Tour torch’ to his young compatriot Hindley, who won the overall title at the Giro d’Italia last Sunday, even more special.

“I think of all the things you do as a sportsperson – and you maybe give trophies or prize money or whatever – seven years after my last professional race, the thing I appreciate the most about it is hopefully being a good role model for my country and beyond,” Cadel Evans, who led the Giro d’italia in 2002, and again in 2010 and 2014,  told Cycling News.

“So to hear Jai saying that, on a personal level it gives me great satisfaction to hear that now.

“And on a side note, in 2022, I was on my couch jumping up and down as he did what he did on the Fedaia so I drove to Verona to watch him go by in the final time trial. Just as a fan and to see him and for us [Australians] it’s history being made.”

The only downside of Evans’ impulse drive to the Giro finish was that he could not get into the Verona arena to see Hindley don the last maglia rosa and congratulate him personally because his children’s stroller was too big to take inside. Yet he was unquestionably there in spirit.

“When you’re with a one-year-old and three-year-old at a race, it’s not ideal” he pointed out. “I’d have loved to gone in and shook his hand and all that, but my priority now is being a dad.”

Looking ahead at Hindley’s hopes that one day he might follow in Evans’ wheel tracks even more closely and win a Tour de France (opens in new tab), Evans said, “Winning the Giro is a great start and I’m interested in where he goes from here.

“The Tour de France is better-known in Australia, it’s more international there and it would be the logical step.

“But the thing is the Tour is a different race. The course of the Giro is harder, physically and the level of the race is higher as it’s getting more and more international over the last few years, to the great delight of the Giro organisers.

“The Tour is another level, but I’ll just echo his words, though, ‘never say never’.”

However, Evans did point out too that from here on in, Hindley will no longer be able to fly under the radar. “Going in as a favourite is another thing, and that’s true for Bora-Hansgrohe as well as Jai. But they’ve got a really strong team, so that’s in their favour.”

In Hindley’s favour when it comes to the Tour, Evans agrees, is his evident ability to hold out under pressure. Hindley proved that beyond doubt during the final week of the Giro when the gap between himself and race leader Richard Carapaz (Ineos Grenadiers) was a scant three seconds.

Rather than panic and make an attack too soon, as some people argue was Carapaz’s key error on the Turin stage, Hindley held on and waited for his moment on the second last stage.

In his winning Tour de France, Evans claimed an early victory on the Mûr-de-Bretagne and said Lennard Kämna’s first-week stage win for Bora-Hansgrohe helped Hindley’s GC bid because it lifted the pressure.

“That would have been great for the team’s confidence first of all. It’s a bit of a pressure release, you just think ‘now we can just ride.’”

Even if Carapaz took the lead on the Turin stage, Evans says it was one turning point for Hindley, given the way Bora-Hansgrohe isolated the new maglia rosa. “They really hurt Ineos, which was a great sign. And good on them, they believed in their own chances.

“Certainly the way he and his team rode the race was exceptional,” Evans said. “I have to say I’m happy an Australian won the Giro but I’m happier to see an Australian [winning] who has consistently been working away for a long time, and found himself a good team that backed him impeccably throughout the Giro. The way Kämna rode on the Fedaia” – dropping back to help Hindley – “was amazing.”

“So, all the ingredients are there. But I’m happier too to see a guy [win] who’s believed in himself, always worked hard, and just kept fighting and believing in himself after such a rough year. Because a lot of people had forgotten about him.”

But after Sunday’s success, that likely won’t ever happen again.