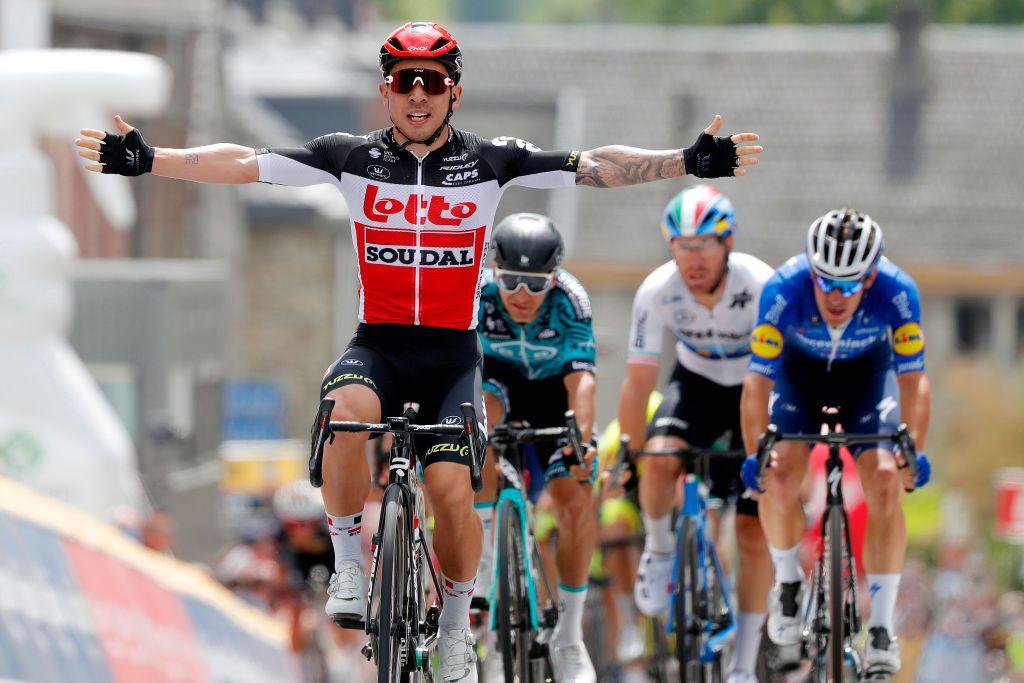 Caleb Ewan (Lotto Soudal) warned that his quick turn of speed alone isn’t going to be enough to secure stage victories at the Tour de France as, while his form is good and sprint train strong, there are other fast men and teams out there with solid sprinter support that will be quick to capitalise on the smallest of missteps.

The Australian rider heads into the Tour de France looking like the rider to beat on the pure sprint stages, after winning two stages at the Giro d’Italia even though he left with knee pain on stage 8 and then making a powerful return to competition at the Baloise Belgium Tour. The 26 year old now moves on to the second step in his plan of winning a stage at every Grand Tour this year.

“I feel really good and of course the Belgium Tour – where I won two stages – has given me that extra bit of confidence,” Ewan said in a team statement. “Of course, I’ll be looking for stage wins at the Tour, but I haven’t put a number on the amount of stages I want to win. Obviously, it’s always my goal to win as many stages as possible, but a lot will depend on how I’m going. In any case, I do feel stronger than ever and it just feels great to have the full support of the team.”

Ewan, who already has five Tour stage wins chalked up against his name, is the leader for Lotto Soudal. Most of the squad is devoted to his lead-out train, which features Roger Kluge, Jasper De Buyst, Tosh Van der Sande and Harry Sweeny, while  Philippe Gilbert, Thomas De Gendt and Brent Van Moer will have the freedom to chase stages.

“As there are more sprinters at the start this year, a lot of teams will want to control the race,” said Ewan. “This should make it a little easier at the end of the stage. With Tosh Van der Sande and Harry Sweeny, our sprint train has been strengthened. I think that we have the best team for the sprints but Groupama-FDJ and Deceuninck-QuickStep have a solid train as well. But there are a lot more riders to keep an eye on like [Tim] Merlier and [Jasper] Philipsen.

“Maybe it is true that I am one of the fastest guys at the Tour, but if I want to beat my opponents, I need to do everything right.”

Ewan will be targeting the flat sprint opportunities and while earlier this year he surprised with his ability to track the acceleration of Wout van Aert (Jumbo-Visma) and world champion Julian Alaphilippe (Deceuninck-QuickStep) on the climb of the Poggio at Milan-San Remo, he’s since changed his training focus. That means he doesn’t believe he is in the running on the opening weekend of the Tour de France, with stage 1 finishing on the Côte de la Fosse aux Loups – averaging 5.7 per cent for 3km – and stage 2 the Mûr-de-Bretagne Guerlédan – two kilometres at 6.9 per cent.

“There are three sprint opportunities in the first six days of the Tour,” said Ewan. “The first two stages will be a little too hard for me. On training, I focused more on sprinting, but I was going quite well uphill at the Belgium Tour. Nevertheless, I don’t think I will be up there during the opening weekend.

“My main goal is to win the pure sprints. I think there are around seven to eight sprint opportunities, a lot more compared to last year. There are also relatively few transition stages.”

With all those sprint chances also come points in the green jersey competition, which Ewan came second in behind Peter Sagan in 2019.