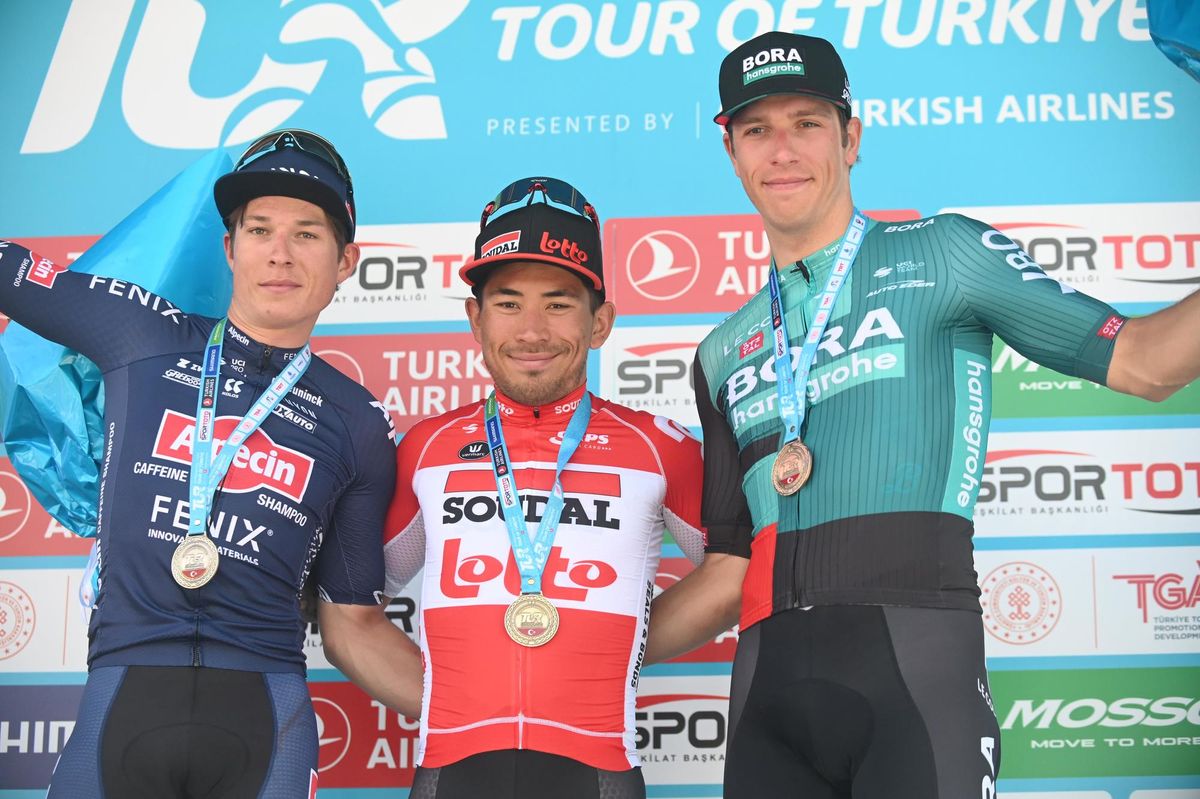 After he took stage 1 of the 57th Presidential Tour of Turkey, Caleb Ewan had to wait for stage 6 to do it again but it was worth it as this happened on the battlefields of World War 1 that set the beginning of Australia as a nation. And it was a bit of an uphill sprint where his preparation for Milan-San Remo became fruitful whereas his current state of form prevents him from winning all the standard bunch sprint on a flat terrain.

“Stage 1 and stage 6 were two different finishes, which I’m happy about, it proves my versatility as a rider,” Caleb Ewan told Cycling News at Eceabat on the Gallopoli peninsula. “The first one was quite a fast sprint and this one was obviously a much harder finish. I’m happy to get the two. To be honest, I prefer a stage finale a bit hilly like today, especially with the actual sprinting uphill. A climb like this one is almost on the verge of being too long for me. I was suffering a little bit but obviously I still had enough for a good sprint at the end. As I prefer the harder stages, I think the last one in Istanbul should suit me with the rise of the finish as well. Tomorrow is also going to be quite hard.”

The Lotto Soudal sprinter is still on his way to recovery after he missed out on riding Milan-San Remo, which was his big goal for the early part of 2022. “A few weeks ago I was quite sick,” he recalled.

“I missed a few important races. I had to have almost ten days off the bike and I started training again only two weeks before the Tour of Turkey. So I knew my form wasn’t gonna be really at its best but it was very important that I came to this race and progress through the race but it’s true I’m not sprinting as well as I’d hoped.”

“My team’s doing a really good job, so it’s disappointing for me that I can’t finish it off. Today I felt good again. It was a long stage, quite hard with quite stressful moments during the stage as well but like I said this finale suits me better now than the super fast finishes. Usually if I’m in really good shape, the fast finishes can suit me also.”

“The super fast bunch sprint don’t suit me as well as I’m kinda small sprinter. Philipsen as well is a world class sprinter, which means he has to be quite strong. He wins in Grand Tours where there are always hard stages. I think it’s the same with me. I’ve won hard stages in Grand Tours before and hard races in general but in a sprint like yesterday, you have to be quick as well but if you find yourself in the right position, you can win but a day like today, there’s no hiding, it’s the strongest guys that’s gonna get to the front. It’s pure strength.”

Ewan had bookmarked stage 6 at the Tour of Turkey because of the symbol Gallipoli represents back home. “For us, it’s a big important place in the history of Australia,” he said. “I had that on the back of my mind today, that it would be a big win for me and a special one for me. That also helped me to go through the difficulties before the actual sprint. If I could pick to win out of the eight stages of the Tour of Turkey, it would be this one.

“Gallipoli is a name that you really remember, growing as a kid in Australia. It’s a really big part in Australian history. But when we learnt about it in school and everything, it’s hard to imagine the place, you don’t even know that it’s in Turkey. I probably got to know that Gallipoli was in Turkey the last time I was here [for stage 2 won by Sam Bennett in 2019]. I was not that strong back then. It wasn’t a sprint I could contest. Definitely now, with the rider I’m turning in to, that’s a finish that really suits me well.”

Therefore, he can set his sights on the maglia rosa that will be awarded at the end of stage 1 of the Giro d’Italia in Visegrád, Hungary, on May 6.