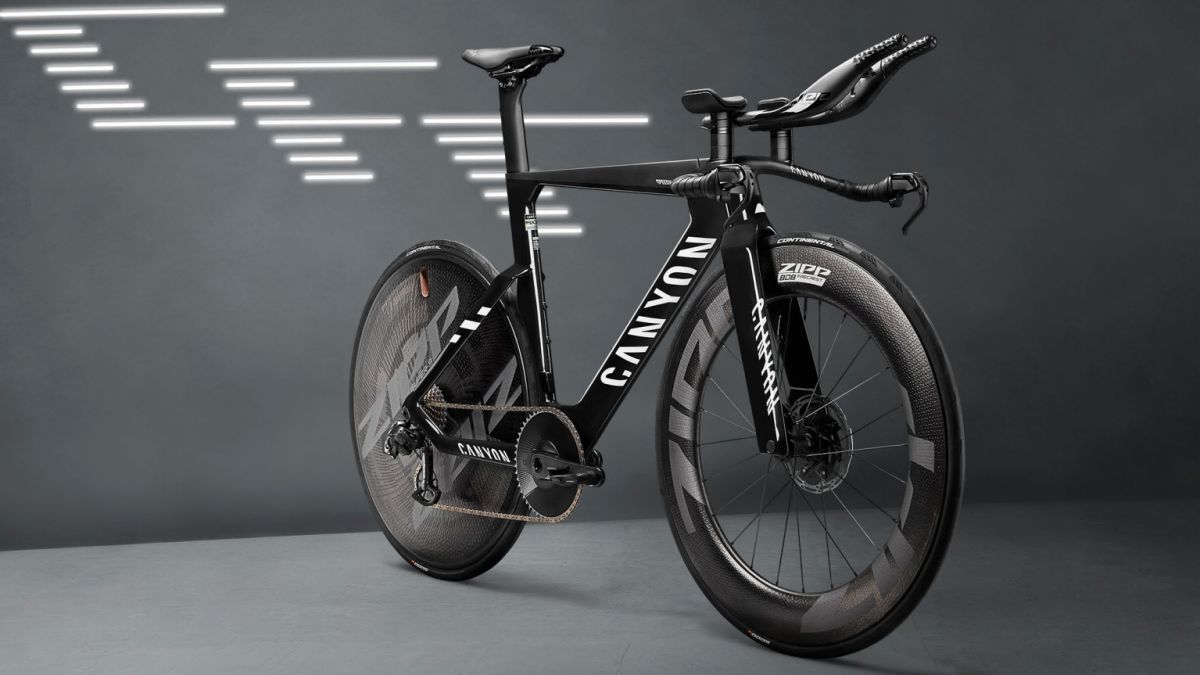 With just three days to go until the opening time trial prologue of the Giro d’Italia, Canyon has unveiled that its sponsored teams will be going against the clock aboard an all-new time trial bike.

The new Speedmax CFR TT is launched today as a UCI-legal version of the similarly-titled Speedmax CFR triathlon bike launched in late 2020.

According to Canyon, the bike was designed in conjunction with its sponsored pro teams – Movistar, Canyon-SRAM, Alpecin-Fenix and Arkea Samsic – in order to meet the ‘exacting standards’ of pro athletes. The result is a bike that takes many design cues from its UCI-illegal triathlon-focussed sibling, but with amendments made throughout in order to fit within the UCI’s rules. Some of these amendments include shallower tube shapes used on the fork legs, down tube, bottom bracket and head tube junction, as well as removing all storage and nutrition features.

The resulting frame is said to weigh just 1,030 grams in a size medium, complete with a 500-gram fork. Only three sizes are available – small, medium and large.

Like most new bike launches nowadays, the Speedmax CFR TT is committed exclusively to disc brakes. Despite this, Canyon claims that the new frame is said to save a rider 2.7 watts in aerodynamic drag when compared to the outgoing UCI-legal Speedmax. No documentation on how this is measured has been published at the time of launch.

The new bike is available in a single level of specification, priced at £10,799 (€9,999 / $TBC). This includes Zipp’s Super 9 Disc rear and 808 front wheelset and a 1x setup of SRAM’s Red AXS eTap groupset, complete with 54T aero chainring up front. Canyon’s own HB0058 base bar, measuring just 390mm wide, forms the base of the cockpit, while Zipp’s Vuka carbon aero extensions are positioned on top, and the arm pads come from Ergon. The bike is even factory-specced with CeramicSpeed’s OSPW system, said to save between 1.6 and 2.4 watts in drivetrain efficiency.

The bike comes complete with the Quarq spider-based power meter integrated into the SRAM Red groupset. The saddle is the time-trial specific Watt from Selle Italia. Finally, despite the wider-is-faster philosophy surrounding tyre choice in recent years, Canyon believes the fastest option for these wheels are a mullet combination of Continental Grand Prix TT tyres, with a 25mm rear paired with a 23mm front.

The bike is available in a single colourway, which is primarily black with white logos dotted throughout, and is available exclusively at Canyon.