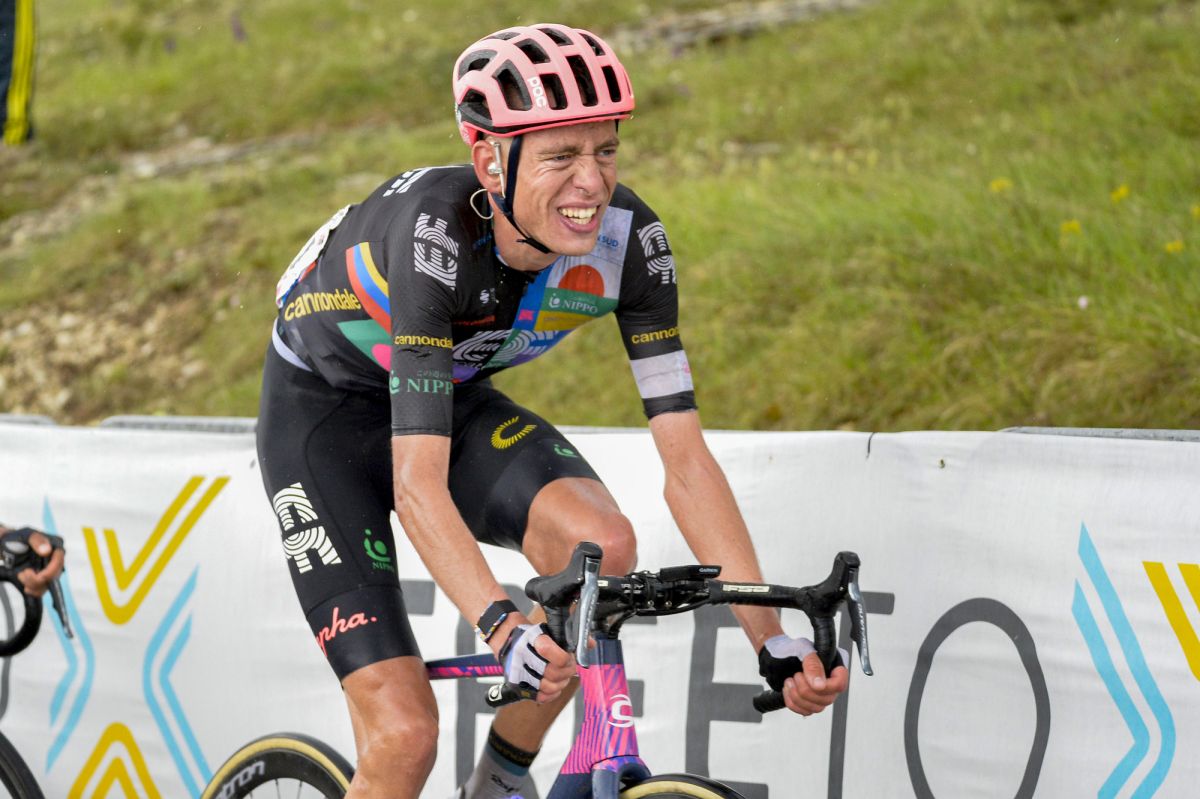 One down, one to go: Hugh Carthy (EF Education-Nippo) and the other top general classification challengers in the Giro d’Italia failed to launch any attacks on Saturday’s first of two uphill finishes this weekend, but the Briton predicted much bigger fireworks from the favourites on Sunday’s much tougher mountain stage.

Carthy crossed the stage 8 finish line in 23rd place on Saturday, moving up to fifth on GC after Belgium’s Louis Vervaeke (Alpecin-Fenix), not an overall contender, shed time on the final climb of Guardia Sanframondi. Carthy remains at 38 seconds, though, on overall leader Attila Valter (Groupama-FDJ).

After grabbing an energy drink and jacket from a team helper in the chilly, overcast afternoon, the 2020 Vuelta a España podium finisher spoke briefly to reporters, confirming the essentials of his current situation: he was in good condition, and he expected the next climbing battle, on Sunday, would be a “proper GC day”.

“This [Saturday] was a calm day mostly, but the end was hard,” Carthy said, “I’m doing fine, though, the legs were OK.

“It was more or less what I expected, there was a bit of tension at the end there, but the uphill was mainly a headwind,” he added, the wind direction likely quelling any thoughts of attacking among the main favourites.

Fifteenth on stage 4 to Sestola, Carthy made it into the same lead group as Egan Bernal (Ineos Grenadiers) and Mikel Landa (Bahrain Victorious). Two days later, Carthy was distanced by the Colombian and Belgium’s Remco Evenepoel (Deceuninck-QuickStep) close to the summit of the San Giacamo ascent.

Be that as it may, on each stage, the gains and losses overall have been measured in handfuls of seconds – 11 to Carthy’s advantage over the Simon Yates (Team BikeExchange) group on Tuesday’s steep ascent, then 17 seconds ceded to Evenepoel, Dan Martin (Israel Start-Up Nation) and Bernal on Thursday.

After eight days of racing, Carthy, therefore, remains very much in the thick of the GC battle.

After Saturday’s truce, for overall challengers like himself, Carthy said Sunday would be a much tougher day. Or as he put it before heading to the team bus, “There’ll maybe be a breakaway, but either way, it’ll be a fight and it’s a proper GC day.”