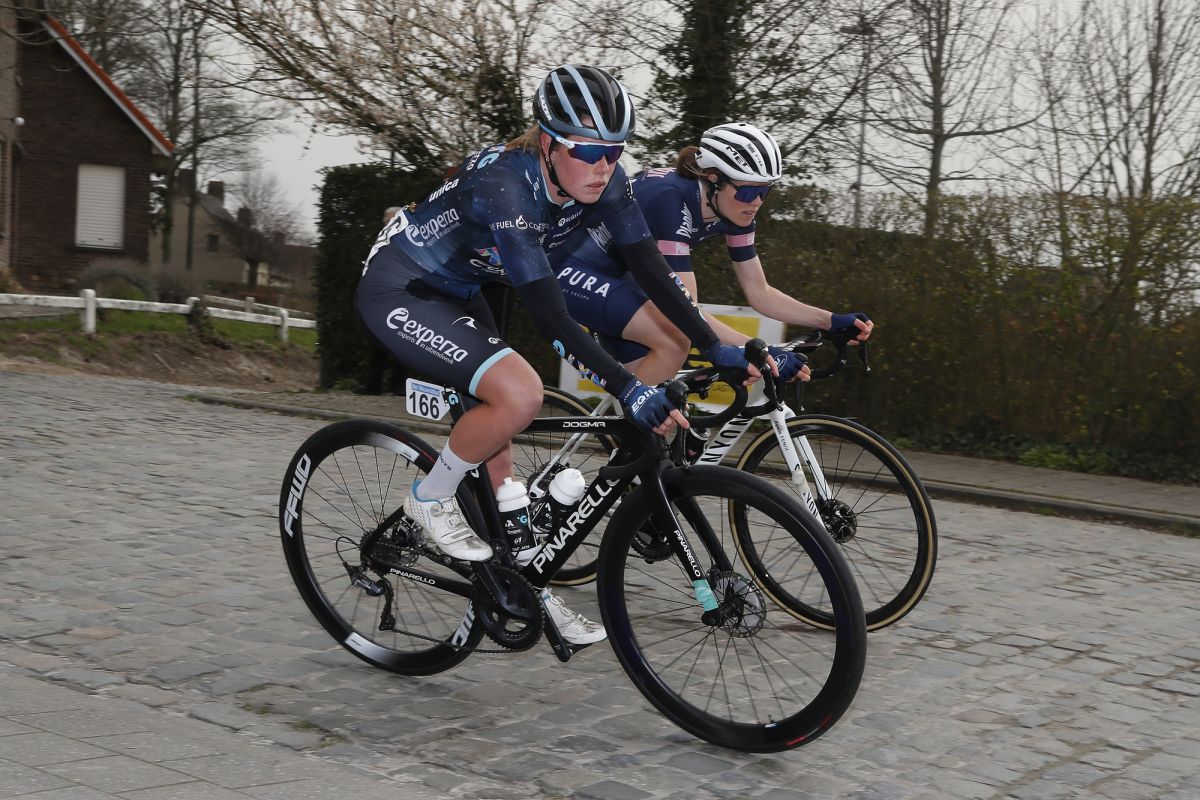 For almost 100 undulating kilometres, 21-year-old West Australian Cassia Boglio is swept along Spanish roads at an average speed of 42km/h, with a large bunch as she made her European racing debut at Vuelta CV Feminas in February. Just six months earlier, she completed her first ever block of ‘proper’ road racing for ARA Pro Racing, leaping into a pandemic affected domestic season.

The ink barely dry on a one-year contract with the under-23 UCI Continental team AG Insurance-NXTG – which has just welcomed a new sponsor and as a result changed its name from NXTG by Experza – Boglio has now crossed her first training camp and  a block of European races off the to-do list. These, too, haven’t been just any races but have extended to the top-tier of women’s cycling with the Australian rider having lined up at Vuelta CV Feminas, GP Oetingen, Danilith Nokere Koerse and the Women’s WorldTour-ranked Trofeo Alfredo Binda.

With its Belgian/Dutch DNA plus former four-time Belgian road champion Jolien D’hoore in the car as well as ties with Patrick Lefevere and QuickStep-AlphaVinyl, there are also plenty more big events on the cards for both the team and Boglio in 2022. The immediate agenda starts with Dwars door Vlaanderen on Wednesday.

AG Insurance-NXTG may not yet be Women’s WorldTour level, like Ruby Roseman-Gannon’s BikeExchange-Jayco team. But the rise of Boglio, from former triathlete ensconced in Australia at the start of the pandemic to road cyclist racing around Europe, is up there in the galaxy with meteoric.

“Definitely pinching myself,” Boglio said. “I did not expect to be over here so soon, it was something I thought might happen in another three or so years from now.

“Some people questioned me and didn’t think I’d be good at just road cycling but I worked hard and here we are!”

A day after COVID-19 hit Australia’s shores in 2020, Boglio made a decision that launched her on this trajectory.

“I was out on a long hills ride and was just really enjoying it and decided I wanted to do that every day instead,” Boglio explains.

While her switch from triathlon to cycling was ‘not a carefully thought out (decision) at all,’ it was one she is glad she made.

“I had been racing triathlon from the age of seven until I was 19, so a really long time. I had always dreamt of being professional and in 2019 I was on the Australian Junior Team and spent three months racing in Europe and Asia.

“Now that I’m far removed from the sport and Triathlon Australia I can be honest and say it was a really awful experience for me and made me question what I was doing.

“I also started a new university degree a week later so pretty much flipped my life on its head in the space of a week.”

Despite the sudden career change, ‘races of note’ did not come until she moved to the Sunshine Coast in early 2021 where she soon caught the attention of the ARA Pro Racing Team.

“I ended up joining the team around June 2021, so only spent the second half of the year (racing the National Road Series).”

A philosophy to fit

Three months later, she secured a contract with NXTG, a team founded by Natascha Knaven, a tough and successful Dutch former rider who is also married to 2001 Paris-Roubaix winner and Ineos director Servais Knaven. Cobbles and crosswinds coursing through their veins, two of their four daughters, Britte and Senne are also on the roster.

The AG Insurance-NXTG philosophy is not just paramount to the team but ultimately to women’s cycling as they look to help bridge the current chasm between the women’s junior and elite levels.

“We believe in equal chances in women’s cycling…between women, the top and the 18/19/20 years old,” Knaven says. “A lack of material, staff, and other facilities. That really makes a difference.

“Our aim is to inspire other teams to also build on the base of women’s cycling to provide platforms for upcoming talents so they can develop at their own pace.”

This ideology sparked the young Australian into trying her luck at a European contract much earlier than convention dictates.

“I was originally not planning on seeking out any higher level teams for 2022 but I ended up contacting NXTG in September, so quite late,” Boglio elaborates.

“I really like the team’s philosophy and as the only Under-23 women’s UCI team, it seemed like a great fit for me at this stage in my cycling career.

“I had a handful of results and some good power numbers behind me, but I think it was my potential to develop in the sport that helped me get the contract with NXTG.”

“Michael is an awesome coach and I’m in very good hands with him,” Boglio says.

“I think we have a similar approach to training and he’s helped me improve so many different aspects in such a short amount of time. I think we are actually quite different riders – he has a lot more power behind him than me but maybe one day I’ll be able to ride everyone off my wheel like him haha!”

While Boglio suspects hillier races suit her best, she doesn’t want to label herself a climber just yet. But her resolve, brimming at every step, mirrors the tough Dutch DNA of her team and the power her coach Freiberg used to output as a racer.

She demonstrated this determination when she first reached out to NXTG on her own.

“I had some advice from Michael about how to write up a resume but that was about it,” she said.

“I just tried to be myself and hoped for the best. After a few exchanges with the team, I had Ben Kersten from ACA help me with negotiations and then with securing the contract in early October.”

Kersten’s references got Boglio over the line, Knaven explains, but her numbers and attitude were a good fit for the team, especially in the face of her first real baptism of fire – DNF’ing GP Oetingen in early March, her Belgian cobbles debut.

“Her powers are pretty good and therefore we signed her, to learn on European roads.

“She is very determined and eager to succeed and we really think that is important because riding in a bunch over here is very different than in Australia.

“For her now, the cobbles are a shock to the system but very good to do to develop further as a rider,” Knaven said, ahead of her start at Danilith Nokere Koerse.

Boglio’s toughness was on display at the cobbled Belgian race last week – with the rider putting her GP Oetingen experience behind her and forging through to finish in 75th place at Nokere Koerse. She then went on to line up at her first Women’s WorldTour race, Trofeo Alfredo Binda, where she didn’t finish, but had plenty of company as less than half the field rode through the finish line of the tough attack heavy and attritional race.

The toughness that got Boglio through the cobbles at Nokere Koerse was also on display in her decision to move across the world.

“It was nerve-wracking and also very stressful for me to leave Australia by myself at 21, without really knowing what to expect,” said Boglio, “I’m lucky that I also have French nationality so it makes coming over here for extended periods so much easier.

“It’s definitely harder being in the Netherlands as the vast majority of Aussies are all in Girona, but there’s still plenty of riders nearby.”

NXTG aims to also clear these hurdles for their international riders.

“For girls (such) as Cassia, these are life changing events so we provide them a safe environment and arrange everything for her so she feels comfortable and only has to focus on doing what she loves,” Knaven says.

“I am a mother also and I surely want to be sure that my kid is safe on the other side of the world.”

Boglio says this level of support from the team, especially sourcing accommodation is ‘awesome’. “There’s plenty of people to help out when needed. I know a few other riders over in Europe that have given me plenty of advice and the girls on the team have also been super helpful and forthcoming.”

While Boglio is unlikely to get the call-up for the women’s Tour of Flanders and Paris-Roubaix, two big races the Under 23 team has successfully scored invites to, she has some exciting chances of her own.

“The team has a really exciting calendar this year and I’m getting opportunities to do some really big races – Brabantse Pijl, Dwars Door Vlaanderen, Ronde Mouscron, Trofeo Alfredo Binda to name a few. The second half of the season is still not decided, but I’ll be looking to do some stage races.”

Leaving behind the logistical nightmares of January’s Australian Road Nationals in her wake – where she came 35th in the combined elite and U23 road race in a week she’d ‘rather forget’ – Boglio is focused on making the most of every opportunity and every race in 2022, as she looks ahead to a brighter future.

“Long term, I hope to be racing at the pointy end of races on a WorldTour team and to really enjoy what I’m doing,” she said.

“Whether that’s by getting good results in races or contributing to a team success, as long as I am loving what I’m doing then that’s a win in my books.

“To race a World Championships for Australia would also be very cool.”

With the backing of AG Insurance-NXTG in 2022 and a former rider like Freiberg in her coaching corner, these dreams could become reality sooner than anticipated.

“When I first started cycling all my goals seemed really distant and unrealistic but I improved a lot faster than I thought I would and started ticking boxes really quickly.

“I think for me, I train hard and am really consistent but the results are still coming because I’m still so green to the sport.

“We will see what happens in the next year but I’m excited by the prospect of how much potential I have to keep improving, especially in a team where I feel really valued and supported.”

SOURCE: CyclingNews   (go to source)
AUTHOR: Rachel de Bear
All copyrights for this article, including images, are reserved to the original source and/or creator(s).