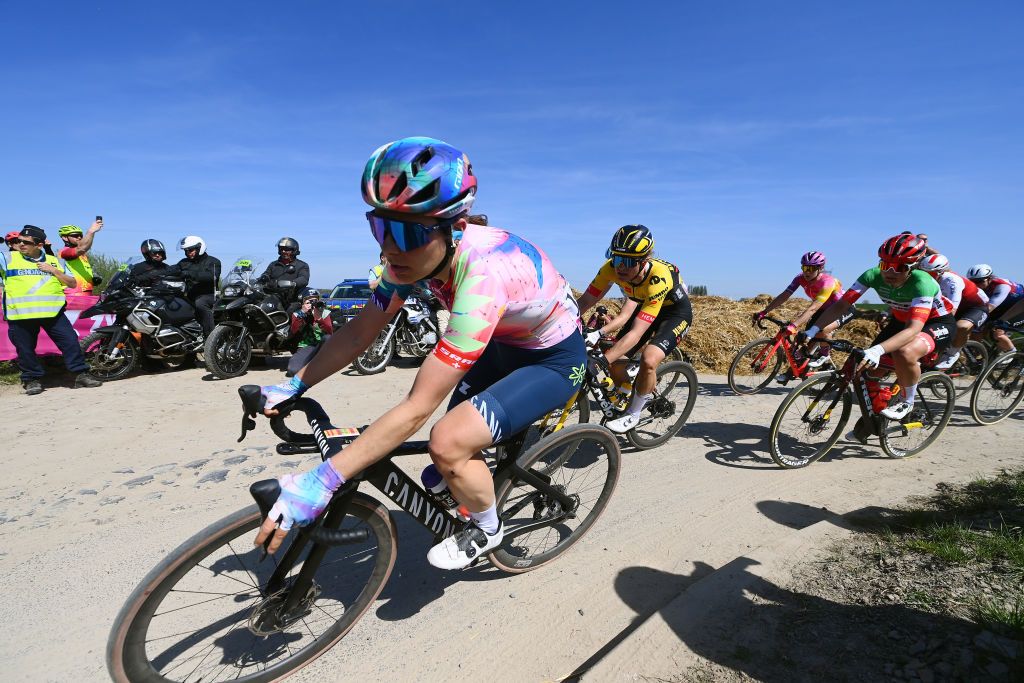 With a fourth place at the Paris-Roubaix Femmes on Saturday, Elise Chabbey continued an impressive run of form this spring, to deliver the best Classics campaign of her career.

The 28-year-old was among the Canyon-SRAM leaders for the race, and at the end of a gruelling 125km just missed out on a podium spot in the sprint for second and third at the Roubaix velodrome.

Chabbey, racing her second year for Canyon-SRAM and her fifth as a professional, overcame a crash during the Paris-Roubaix Femmes, finishing her ride with a twisted handlebar, something the Swiss rider only noticed after the finish.

Despite the hardships of the day, Chabbey told Cycling News at the finish that she was still a bit disappointed at her final placing.

“It was a tough race,” she said on the infield of the Velodrome André Pétrieux. “I crashed maybe in the second sector and then I adjusted mentally to go back … and push and come back to the bunch.

“It’s never easy to pass this kind of crash and stay in the race but I’m happy I did, that I came back and kept focus. Tiff [Cromwell] was amazing with me. She rode with me in every cobbled sector.

“At the end I’m a bit disappointed to come fourth here, but I mean it’s still a good result for me on the track. I’m not used to the track at all, so yeah, I’m happy.”

Chabbey said that she wasn’t in the best position among the contending group when Elisa Longo Borghini (Trek-Segafredo) made what turned out to be the winning move, going solo with 32km to go.

It was a mistake she said, noting that at a race like Paris-Roubaix, it’s another reason that positioning yourself at the front of a group is vital.

“Actually, I was really in the bad position when she went and I couldn’t even see that she went away,” she said. “So, this is completely my mistake.

“It’s the kind of race you have to be in the front the whole time because once you miss a move, you don’t even see it and it’s hard to get it back. But then I was in this chasing group, and I was in a good position.”

There would be more attacking to come from the chase group, including Lotte Kopecky’s (SD Worx) attempt on the Carrefour de l’Arbre. Chabbey got back on despite another difficult moment, though, and rode to the velodrome with a group of six riders.

Once she got there, Chabbey took a very creditable fourth place, though she noted that her inexperience on the track and cramp in the final sprint held her back in the dash to the line.

“I tried to listen the advice on the radio, but I’m really new to the track,” she said. “It’s my second time only on the track so I did my best. The sprint was super fast and I had a cramp also on the last straight. I’m disappointed that I’m only fourth.

“Next time I go for the podium. The team was really believing in me the whole time, like my teammates were always pushing me and motivating me, so it was good.”