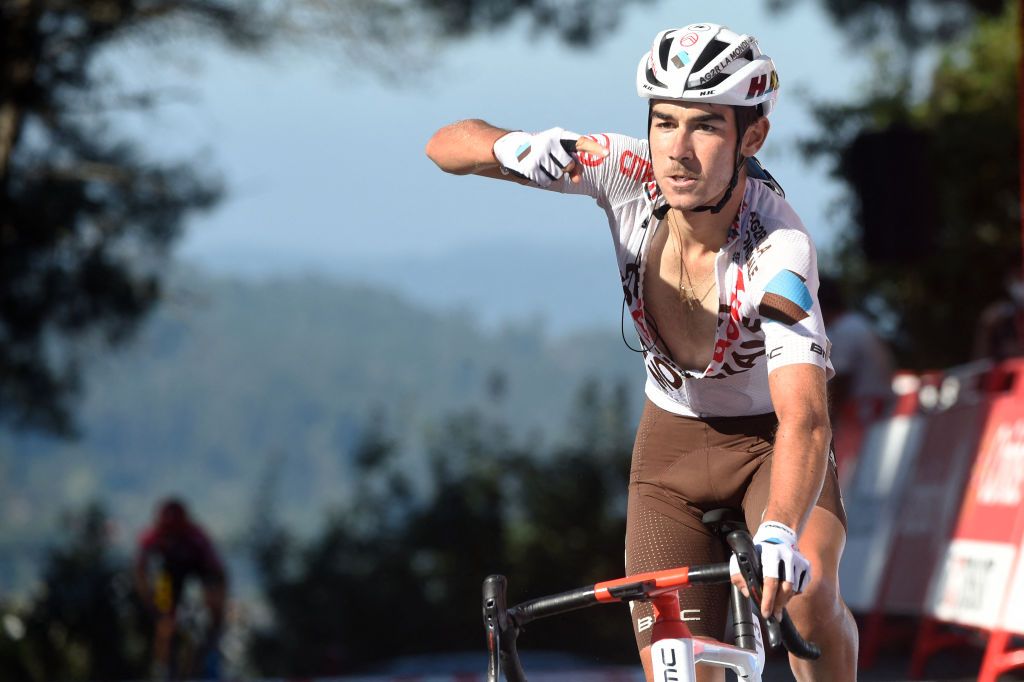 In his first full season as a professional, Clément Champoussin had a great start to the year and a great end to the year, but it’s the bit in the middle that he wasn’t too happy about, and he’s out to find more consistency in 2021.

This season started with a bang, as he placed 11th at the Tour du Var and second at the Faun-Ardèche Classic before placing fourth in an action-packed and star-studded edition of Trofeo Laigueglia.

Things turned for the worse in the spring and his Giro d’Italia debut ended after just nine stages, but he managed to bounce back to win a stage stage of the Vuelta in a dramatic smash-and-grab on the penultimate day.

“It was my first full season in the pros, and I’m satisfied overall,” Champoussin told Cycling News at a recent team training camp.

“I had good start to the season, and good end at the Vuelta. For my first full year, it’s mostly good overall. There were some highs and lows but I did well to bounce back for the last part of the season after a difficult summer.”

Champoussin’s start to the year was even more impressive considering he was ill with COVID in January. Still, he showed he already belonged at the top level with his ride at Laigueglia, where he, Egan Bernal, Bauke Mollema, Mauri Vansevenant, Mikel Landa and Giulio Ciccone knocked chunks out of each other on the final climbs.

“It wasn’t a big WorldTour-level race but it’s one I like, with a parcours that suits me, and there were some big names,” he said. “I was happy to be able to be able to play a part at the head of the race and throw in some attacks. I enjoyed that and it also gave me confidence. It showed that on a good day, I can do good things.

“Normally I’m not very good at start of the year, so I surprised myself there. I also had COVID in January, so I didn’t ride much at all, but I managed to find form very quickly.”

However, Champoussin said he did eventually end up paying the price for that lack of winter base kilometres. He was short of his best at the Volta a Catalunya (44th) and Tour de Romandie (30th) and was consequently off the pace at the Giro d’Italia, which was meant to be his first full Grand Tour after the 2020 Vuelta only comprised 18 stages.

The grim conditions of the opening week didn’t help and Champoussin struggled through before leaving the race with fatigue mid-way through stage 9.

“The fact I hadn’t ridden much in January, I maybe paid for that later on,” he said.

“At Catalunya I didn’t have good form. At Romandie I was able to salvage a couple of placings on the easier stages but I didn’t have the level for the harder stages or the GC. So the preparation for the Giro wasn’t good and I just felt really fatigued. There was no point struggling on.”

After a couple of weeks of rest, Champoussin went about building that base he never managed to build in January. He retuned to support Ben O’Connor at the Mont Ventoux Challenge in late June and got back into his stride at the Route d’Occitanie, before a July training camp led into the Tour de l’Ain, where he was back in the mix with sixth overall.

He then went back to the Vuelta as a breakaway hunter and, after a couple of top-fives, landed the biggest win of his career at Mos on the final road stage.

“I rested up after the Giro and started training again, with an important camp in July. I built a platform for getting back to a good level,” he explained.

“Initially I had just the Giro on my programme for 2021 but afterwards I asked to go to the Vuelta to try and finish the season well and to have a Grand Tour in the legs. Fortunately I was able to go, and it went well.”

Champoussin’s Vuelta victory will live long in the memory. His breakaway appeared doomed as the first group of overall contenders caught them just ahead of the short final climb. However, Primoz Roglic, Enric Mas, Jack Haig, and Adam Yates kept stalling in between their accelerations, giving the breakaway riders fluctuating hope.

It was Ryan Gibbons and Mikel Bizkarra who looked to be profiting for most of the climb but suddenly, with less than 2km remaining, Champoussin caught up with the small front group and shot straight out of the front of it. He wasn’t seen again.

“I had trouble realising what I’d done, because it was such a crazy scenario. It seemed impossible to win a stage where you’re with the favourites at the foot of the final climb. It was totally unexpected,” he said.

“It was even more surprising because I wasn’t necessarily going to go for the break that day, and because the previous day I really didn’t feel good. But I slipped in the break quite easily, then I quickly saw that I was really on a great day. I rode well all day, didn’t do too much, and then when the favourites came back I understood it would be complicated to play for anything but I hung on well the whole climb, then I got an opportunity and I took it.”

Champoussin rounded out his campaign with the Tour of Luxembourg and three autumn Italian Classics, including Il Lombardia, and has since been preparing for 2022 after his off-season break. He has recently completed a team training camp in Spain, building the base that was lacking last year, and setting his objectives for his second full season.

With Ben O’Connor set to lead the line at the Tour de France, Champoussin’s debut there looks set to wait, with unfinished business to attend to at the Giro.

“I’d like to do Tirreno and Strade Bianche – those are two races I really want to do next season,” he said, indicating an Italian flavour to the first part of his season. “It’s for that reason that I think it will be the Giro for me – to finish it this time.

“I’ll be looking for more consistency next year. I’ve already shown I can ride pretty well in WorldTour races and I’ve learned how to better prepare myself for my objectives, so hopefully that will serve me well in the coming years.”