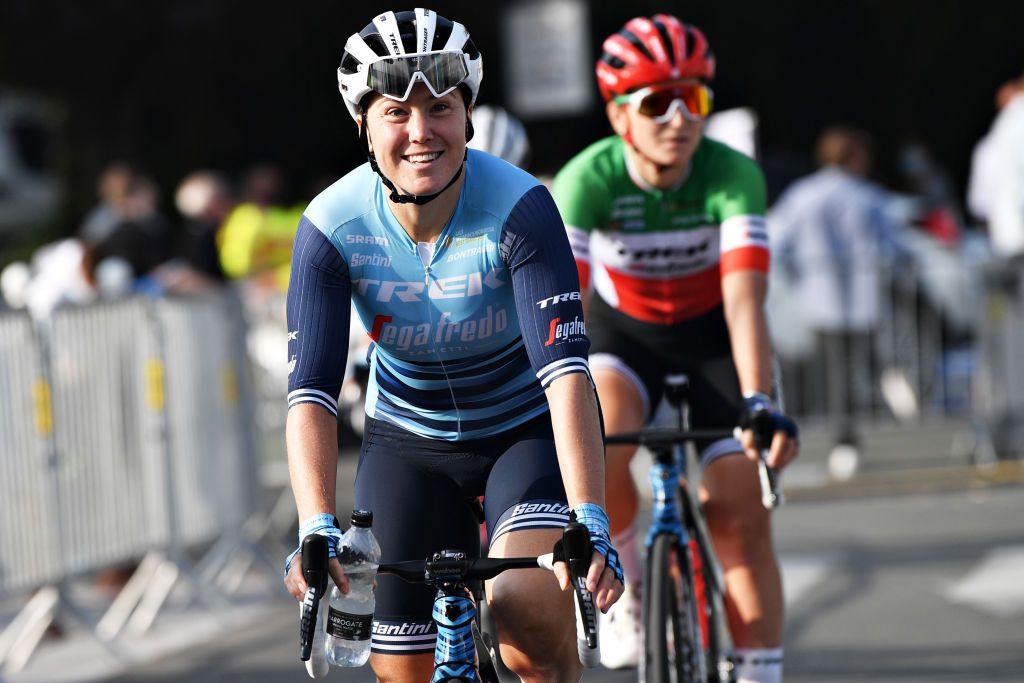 Chloe Hosking knows what it’s like to line up at a UCI Road World Championships with the weight of expectations on your shoulders. This year, though, the Australian sprinter is happily stepping out in the green and gold to race in Flanders without that pressure.

The Flanders course, with its short punchy climbs and narrow roads, doesn’t scream flat-land loving bunch sprinter but nor does it shout climber or break away specialist. It instead delivers an event that – depending on how it is raced – could play into the hands of a wide variety of riders.

That, said Hosking, is exactly what makes it so exciting.

“What’s so great about the course is that it’s opened itself up to many possibilities and whether or not that’s suited to me or not, I don’t care,” Hosking told Cycling News in an exclusive interview.

“I just care that a World Championship can be won by more than three riders and I think that that’s what this course presents. I think it’s going to be a really interesting and potentially surprising race.”

The elite women will traverse 157 kilometres between Antwerp and Leuven, on a course that contains 20 short climbs and a total elevation gain of 1,047 metres. The race heads south for 56km before taking on loops of two distinct finishing circuits. The Leuven circuit containing four punchy climbs, and the Flandrien circuit with six climbs, and some longer and tougher ascents including the Smeysberg and the cobbled Moskesstraat.

The Australian team had been expected to be going in with Grace Brown as a favourite, however injury changed that, and they now have a diverse group spearheading the team including climber Amanda Spratt, experienced all-rounder Tiffany Cromwell and Hosking.

Hosking has nearly 40 career wins to her name and has used her fast finish to take victories at La Course and the Commonwealth Games. But it has been far from the easiest of season’s for the 30 year old who moved to Trek-Segafredo at the start of 2021.

In her 12th season as a professional cyclist Hosking has had to grapple with COVID-19 and then the flow on of pericarditis. She returned at the Ladies Tour of Norway, just getting medical clearance to start racing again in the days before.

“It’s a Worlds that I’m going into pretty relaxed because of what I’ve had to deal with over the last couple of months,” said Hosking.

“I’m just keeping everything in perspective, like there’s no way I’ve had the best preparation I could have ever had for this Worlds. And that in itself takes some pressure off.

“Also just the mentality that I’ve decided to adopt for the entire part of the season, end of the season, which is being happy to be racing and then taking the opportunities as they come. So, yeah, I’m definitely not putting any pressure on myself and just going to go in and see what happens.”

While the course may be far from the sprinter-friendly terrain where Hosking lead the Australian team at the 2016 World Championships in Qatar, she believes the race could come down to a reduced bunch sprint, and Hosking has definitely shown an ability in the past to get over the shorter punchy climbs. H

She has also seems to have slipped back into the peloton not just with ease but also winning form. In her very first race back, the Ladies Tour of Norway, she swept up her first win with Trek-Segafredo, holding off Coryn Rivera (Team DSM) in the sprint on stage 4 and then she also went onto win stage 3 at the Tour de l’Ardeche.

Given that form her role among the Australian team – which beyond Spratt and Cromwell also includes Australian champion Sarah Roy, Rachel Neylan, Lauretta Hanson and Jess Allen  – there can be little doubt about the part Hosking has to play.

“I am fast,” she said with a modest chuckle.

“So if it does come back to a group, they’ll look to me. So it’s pretty clear that my one job will be to do nothing until the last 200 metres.”