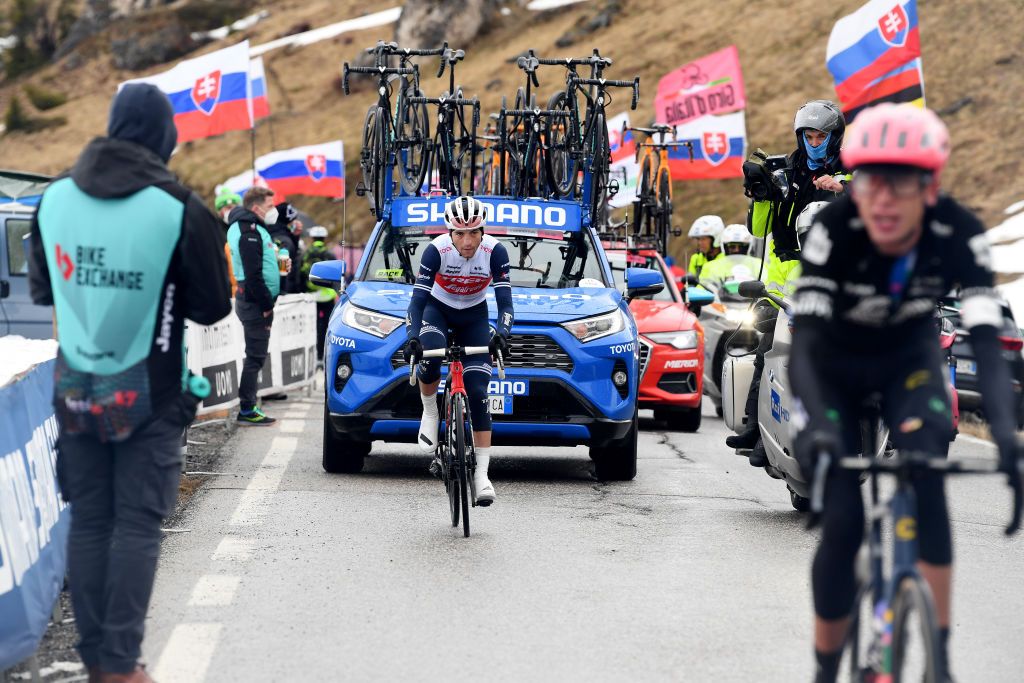 Unexpected Trek-Segafredo leader, Giulio Ciccone, held firm on the overall during stage 16 as many of his more favoured Giro d’Italia overall rivals suffered in the tough conditions of the shortened stage, with the Italian reigning in his instinct to follow the attacks as he instead played a more conservative hand.

Ciccone came over the line in fourth 1:18 behind stage winner and GC leader Egan Bernal (Ineos Grenadiers) and 51 seconds behind the second and third placed riders on the stage, Romain Bardet (Team DSM) and Damiano Caruso (Bahrain Victorious). That meant he held onto his sixth place on the overall and while his gap to the riders sitting in the first two positions on the GC, Bernal and Caruso, may have extended he made up ground when it came to the rest of the places between him and the podium.

“I didn’t give in to the instinct to follow whoever was attacking and to accelerate even though I felt good, but I climbed at my own pace,” said Ciccone in a team statement. “Looking at the overall ranking now, it’s a choice that has paid off.”

Ciccone, who started out as Trek-Segafredo’s self-described joker in the deck, was playing a far more attacking hand earlier in the Giro but with the leadership mantle shifting from Vincenzo Nibali and the podium within sight that changed. The 26-year-old had climbed to fourth on the overall after taking second on the gravel of the Campo Felice but suffered on the Montalcino stage and dropped back to eighth. However he has slowly pulled back two spots since and continues to try and work his way closer to the top 3.

Ciccone heads into the second rest day 4:31 behind Bernal and more than two minutes behind second-placed Caruso but the gap to third has narrowed, as he sits 51 seconds behind Hugh Carthy (EF Education-Nippo), who finished just behind Ciccone on stage 16. Plus, he is within 13 seconds of both Aleksandr Vlasov (Astana-Premier Tech) and Simon Yates (Team BikeExchange), who sit in third and fourth on the overall. Before stage 16 he was nearly a minute back from his nearest rival and 1:12 away from the podium.

Stage 16 was always expected to be a big day for movement on the GC and even though forecasts of deteriorating weather conditions led to what was billed as the queen stage being cut from 212 kilometres to 153 kilometres, there was still more than enough time on the road to cause significant damage. Yates, who had looked to be Bernal’s biggest rival, slipped from second and now sits just ahead of Ciccone on the overall while Remco Evenepoel (Deceuninck-QuickStep) has fallen completely out of the running after losing over 24 minutes on the tough day in the Dolomites.

“Although the Giro was forced to revise the route, I think the spectacle was not lacking – it was an epic stage,” said Ciccone. “The new profile blew away any tactics we had from yesterday evening and made the day more explosive. The pace was strong from the start, but, of course, Passo Giau made the real difference.”

As the race made its way up the testing final climb of the Passo Giau – 9.9 kilometres at 9.3 percent – Ciccone held firm with a select group of riders including Bernal, Bardet, Caruso and Carthy, as well as Carthy’s teammate Simon Carr who was driving the pace at the front. As soon as Carr slipped back Bernal decided it was time to attack. Carthy quickly followed and Bardet looked to be trying to close the gap but in the end Bernal rode clear of all his rivals.

“EF set an impressive pace, and from there it was a test of endurance, legs and head. I had good feelings all day, and this allowed me to manage my energy smartly,” said Ciccone.

Ciccone crested the summit, with 17 kilometres to go, in fourth and held that position as he descended to the line.

Teammate Nibali rebounded from a fall on stage 15 where he injured his ribs, coming across the line in 17th, after trying for a stage victory by going out with the early break that was cut down by the fierce pace of what became a skeleton GC group.

“It was a stage with no time to breathe,” said Nibali. “The absence of Fedaia and Pordoi [climbs] made it less difficult in terms of altitude, but it was still very difficult. Such cold days, all day long in the rain, put everyone to the test.”