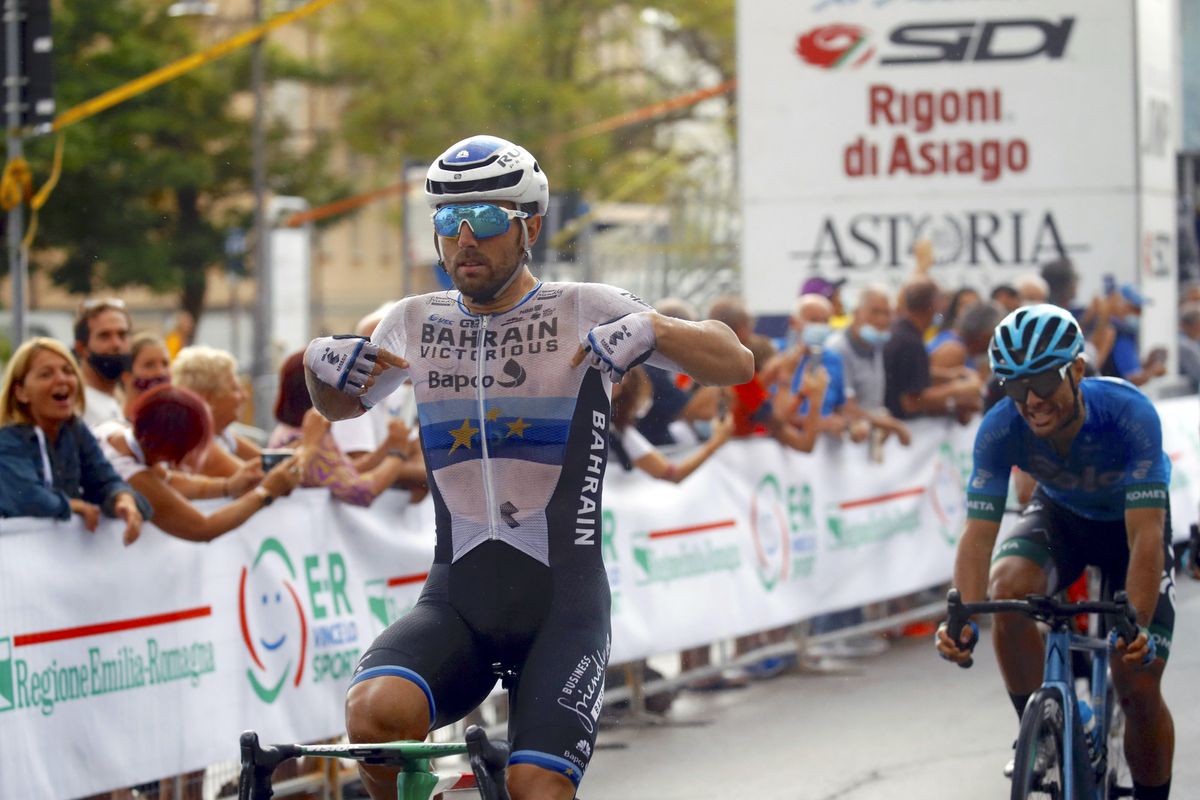 Sonny Colbrelli (Italy) laughed when one question was put to him. His ideal scenario for the finale of the UCI Road World Championships elite men’s road race is easily articulated, but it might prove more difficult to execute in Leuven on Sunday afternoon.

“I’d like to arrive in a small group without Wout van Aert,” he told reporters in a Zoom call on Friday evening.

Asked to expand on that preference, Colbrelli laughed again. “I’d like it to be a group of 10 riders, without Van Aert and with two of our own in there with me,” he replied, and then roommate Matteo Trentin interjected, jokingly shutting down the line of questioning from a local reporter. “We can’t tell you how we plan to do that, otherwise you might tell him,” he quipped.

Trentin, Colbrelli and the third member of Italy’s leadership triumvirate, Giacomo Nizzolo, are well aware that solving a problem like Van Aert (Belgium) is key to their prospects of securing the squada azzurra’s first elite men’s road race victory since Alessandro Ballan claimed the rainbow jersey in Varese some 13 years ago.

The Belgian has spent much of 2021 burnishing his status as the most complete rider in the contemporary peloton, and he underscored the point with his displays at the recent Tour of Britain and his silver medal in last weekend’s Worlds time trial.

“In the end, everybody’s tactic will be to try to avoid bringing Van Aert to the finish in a sprint,” Trentin said. “What Van Aert has shown in the last three weeks has been really impressive. And he was impressive before that, too, to tell the truth. He’s been beating everybody – climbers, time triallists, sprinters. It’s obvious that he’s the number one favourite. You have to go through him to win the Worlds, in any case, so you can’t not consider him.”

Trentin, Colbrelli, Nizzolo and national coach Davide Cassani were speaking to reporters barely half an hour after their compatriot Filippo Baroncini soloed to victory in the under-23 men’s race with a searing attack on the penultimate ascent of Wjinpers. The elite men’s race is an altogether longer and more arduous affair, but the event – and the junior men’s race earlier in the day – seemed to bear out some of the predictions about the nature of the finishing circuit in Leuven.

“The course is fast and quite dangerous, with a lot of twists and turns, so you have to ride on the front,” said Colbrelli, who noted that the two laps on the so-called ‘Flandrien Circuit’ might provide an opportunity for those seeking to blow the race open.

“That circuit is exposed and there could be wind on the climbs, so maybe teams without a sprinter will try to attack to open it up. The circuit in Leuven is a fast circuit but there are a still a lot of places where you have to accelerate.”

Colbrelli arrives at this World Championships in something approaching the form of his life and buoyed by victories at the European Championships in Trento and the Memorial Marco Pantani. Although Trentin and Nizzolo are also protected riders to a degree, it is clear that the Italian champion will be the squad’s primary option on Sunday.

“My role still has to be decided, but I’ll be a fundamental rider for this national team,” said Colbrelli, who maintained that the burden of responsibility would weigh on Van Aert and the Belgian team. “There’s pressure because he’s the number one favourite and he’s racing at home. And putting a lot of pressure on him is an advantage for us.”

Two years ago in Yorkshire, Trentin took the silver medal on a course that, like Leuven, was demanding from start to finish but without any particularly daunting obstacle along the way. He was beaten to the line by Mads Pedersen on that occasion, and he suggested that the Danish squad might prove an ally of circumstance here.

“Denmark have one of the strongest teams,” Trentin said. “They have [Magnus] Cort who’s very fast, but, unlike Belgium or us, they maybe don’t have a big bunch sprinter like a Van Aert or a Sonny or a Nizzolo. It means that they’re a team who could create chaos and they could be a good ally.”

The Zoom call with the Italian riders was briefly interrupted to allow federation president Cordiano Dagnoni deliver remarks from the podium area of the under-23 race, where he paid tribute to the victor Baroncini. Dagnoni’s election as president this year also effectively signalled the end of Cassani’s tenure as national team coach, and he confirmed as much on Friday evening.

“This will be my last World Championships as commissario tecnico,” he said. “In my eight years, I’ve never seen such a strong and cohesive team. We have no radios, but I’m calm because my regista [road captain – ed.] in the race is Trentin. The objective is to make as few mistakes as possible. If we don’t make mistakes, then we can do well.

“Belgium are a strong team and we set out knowing that, but we have our own ideas too. So what they do is important only up to a certain point. We want to impose ourselves on the race based on our wishes.”

Trentin and Colbrelli shared a telephone to call into Friday’s press conference, just as they are sharing a room at this Worlds.

“Their problems are their own problems, to put it simply. I know you journalists like these stories, but who knows if it’s true or not. We’ll see on Sunday.”