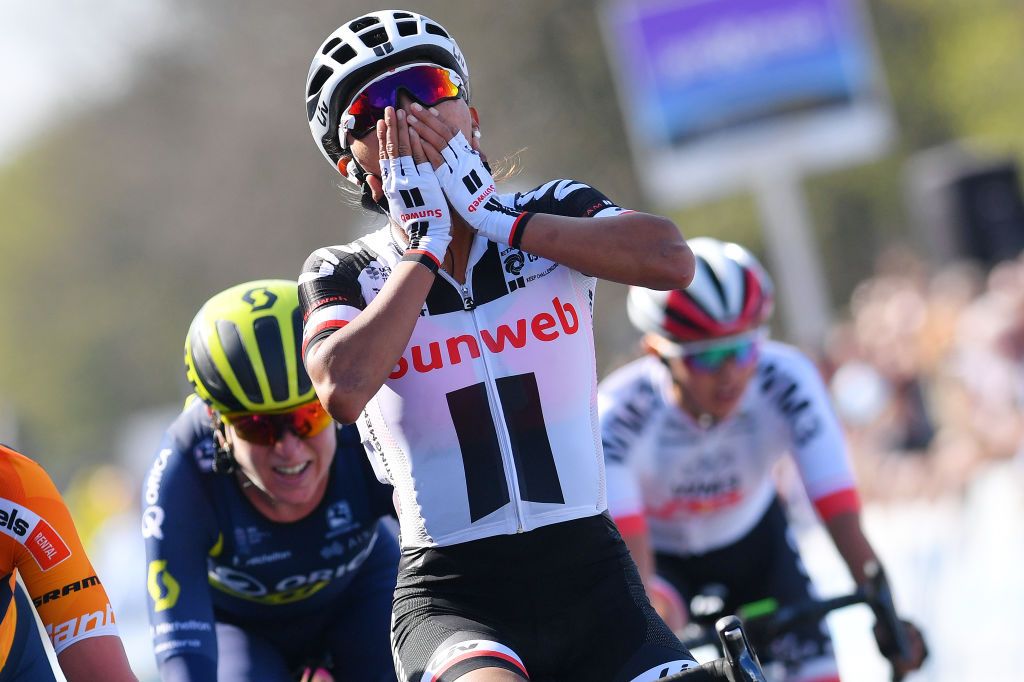 Coryn Rivera, the only American to ever win the Tour of Flanders, is Team USA’s best shot at winning the elite women’s road race at the UCI Road World Championships held on September 25 in Flanders, Belgium.

The US hasn’t won an elite road race world title since now-banned Lance Armstrong in 1993, and before that it was Greg Lemond, who won the title twice in 1983 and 1989, the only women to have done so were Audrey McElmury in 1969 and Beth Heiden in 1980.

In an interview with Cycling News, Rivera says it’s time to bring the rainbow jersey back to America.

Rivera stormed to an historic victory at the Tour of Flanders in 2017, a feat she said that she will always remember as one of her most significant accomplishments.

“It’s still kind of crazy to think about that win at the Tour of Flanders. It’s still very special. When you’re the first, you will remain the first, and I look back on it fondly as one of my biggest accomplishments,” Rivera said.

“It takes a certain kind of punchy rider to win; to be able to suffer and make calculated decisions last in the race.”

At the upcoming World Championships the elite women will race 157km between Antwerp and Leuven, with the course including 20 short climbs and a total elevation gain of 1,047 metres. The race starts at the Grote Markt in Antwerp and travels south for 55km to the two distinct finishing circuits; the Leuven circuit includes four climbs, and the Flandrien circuit consists of six climbs.

Rivera said the Worlds route is much more similar to the Brabantse Pijl than it is the Tour of Flanders, and that either way, the it’s well-suited to her strengths.

“Historically, I’ve had a good track record in Flanders. I’ve been looking forward to this race all year and it’s been my focus as a goal. It’s not like the actual Tour of Flanders route-wise, but it’s a good course for me; punchy and a classic Belgian-style race, and that suits me,” Rivera said.

“The bulk of the climbing is in the middle of the race at Worlds, on the Flandrien circuit, and the race might open up at that point, which is quite similar to the Brabantse Pijl.

“Whereas at the Tour of Flanders, the bulk of the decisive climbs are in succession at the end of the race, making for a decisive final. I think both styles of races are good for me and suit me well.”

USA Cycling announced its team for the elite women’s road race at the Worlds, and along with Rivera, are national champion Lauren Stephens, Ruth Winder, who is set to retire at the end of the season, Leah Thomas, Tayler Wiles, and Kristin Faulkner, who recently won a stage at the Tour of Norway and finished third at GP de Plouay.

“I think we have a good shot at a medal, for sure, that’s always the goal for the nation. We are going in with a team that can approach the race at different points and strengths for the course. If we play to our strengths correctly then we can come away in any sort of situation with a medal opportunity,” Rivera said.

“I’m looking forward to it and we have a strong team. It will be Ruth’s last Worlds so she will want to finish well, Lauren hasn’t raced a lot in Europe, but Kristen has had good results lately, so I think we’re coming in with a strong team. Ruth, myself and Kristen have proven that we can be at the pointy end of the race when we need to be.”

Rivera has had a successful career with victories at the hilly one-day races, in addition to Tour of Flanders, at Trofeo Alfredo Binda and she won the overall title at the Women’s Tour (2018). She’s also had strong performances at the World Championships; 31st after being in a breakaway in a mountainous Innsbruck 2018 and 10th at the hilly edition in Yorkshire 2019.

This year, she won a stage at the Giro d’Italia Donne and then finished 7th in her first-ever participation at the Olympic Games in Tokyo in July, strong indicators that she is progressing well toward the World Championships in Flanders.

“It was a great indicator of where I was at, and all the work I had put in last year and overcoming adversity this spring and taking time off for personal reasons. It was great that everything came together and that I had minimal set backs. I had a great altitude camp before Nationals, a good Giro, and carried that through to the Olympic Games. Everything was right where we projected it to be,” Rivera said.

“I really gave it my all, and was empty by the end, at the Olympic Games. I can be happy with that performance; my first Olympics, a top-10, and I went into it as well as I could. A medal was the main goal but with a different perspective on the year, and it being by first Games, and with all of the adversity that came with it being delayed a year, I can still be happy.”

Rivera started her season later than usual following the death of her father, who died from COVID-19 this spring. She returned to racing at Brabantse Pijl Dames and the Ardennes Classics but aimed of mid-late season peaks at the Olympic Games and World Championships.

She said that part of what made her Tour of Flanders victory so special in 2017 was that her father was there watching the race and got see her make history as the first American winner of the Monument. Rivera said that she will miss having her father, who was one of her biggest supporters, at the races.

“I have a different perspective on life now and how I see racing and my career and what I want to do in life. I would have loved to shared it with my dad. When I won Tour of Flanders in 2017, my dad and my fiancé were there, and so it was a special moment,” Rivera said.

“I won’t have family at Worlds this year. I know that my dad is always with me and that he’s proud. In a way, everything I do, I do to make him proud and even though he’s not here I know that he’s watching and smiling from above.”