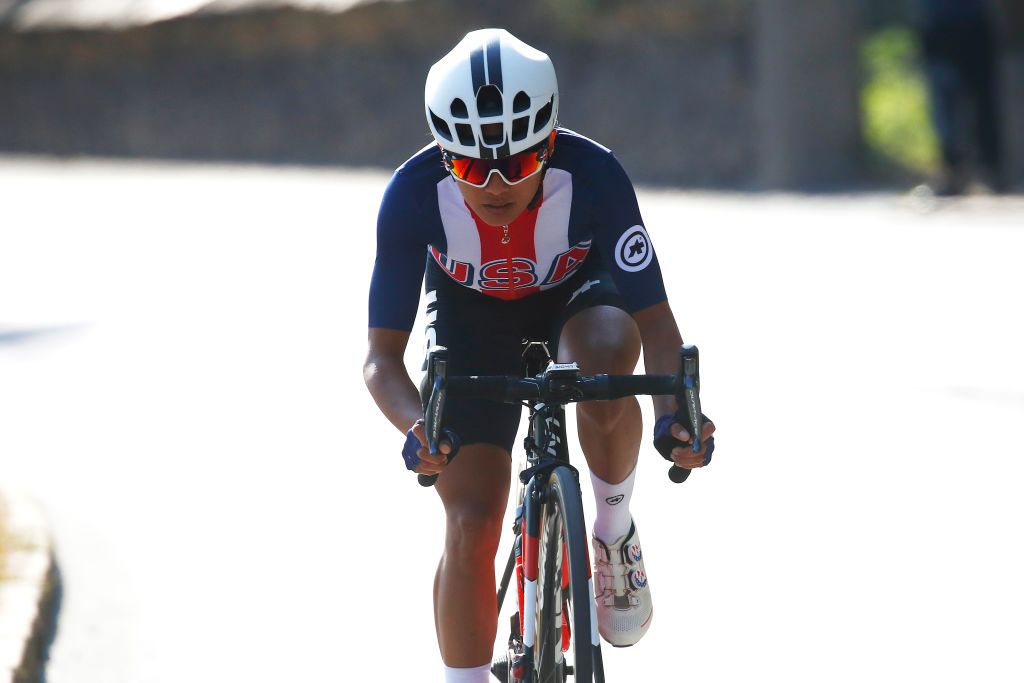 Coryn Rivera (Team DSM) has had a later start to her season after a personal family matter that kept her at home in California for much of the Spring Classics. The America returned to racing at Brabantse Pijl Dames and now looks ahead to the Ardennes Classics in hopes that strong performances will secure her spot at the Olympic Games in Tokyo this summer.

“I will be at Amstel Gold Race and Flèche Wallonne, and we will see if I get added onto Liège-Bastogne-Liège,” Rivera told Cycling News in a phone interview following Brabantse Pijl. “Every race counts and every race is a showing of myself, so I’m trying to make them count.”

Rivera intended to start her season at Omloop Het Nieuwsblad in February, and then compete in a full range of the Spring Classics, but she returned to her California home to support her family through a personal issue this spring.

“I went home in February to be with my family, and although I had the chance to race Omloop Het Nieuwsblad, I decided to stay home. The team was very supportive,” Rivera said.

Rivera joined Team DSM at Brabantse Pijl Dames on Wednesday, in what was her first race of the season. She placed 38th and supported her teammate Juliette Labous, who finished sixth after being part of the late-race breakaway.

“Brabantse Pijl was a hard one, for sure, but I was excited to be back to racing after a late start,” Rivera said. “I still prepared well considering the circumstances. It was a really fun race. Last year was my first time doing it, and it was a similar parcours; a fun and dynamic race. It was active and a great way to start, and to see where I’m at, even though it wasn’t the best result, I’m happy considering it was my first race.”

Rivera’s compatriot, American champion Ruth Winder (Trek-Segafredo), won Brabantse Pijl after a bike throw to the line against Demi Vollering (SD Worx). It was an important victory for Winder.

Rivera and Winder are part of USA Cycling’s long list of riders to compete at the Olympic Games in Tokyo this summer. The final roster will be decided on May 1, through a coaches selection process, and so the Spring Classics and the Ardennes Classics present the last opportunities for the selection of riders to show their best performances.

“It’s been jumbled up with the pandemic but the qualification period ends on May 1, and the team will be announced at the beginning of June,” Rivera said. “Every race counts and every race is a showing of myself, so I’m trying to make them count. It’s hard to say how the selection will happen because it’s all coaches’ selection, at this point. You have to be in the long team to be considered for coaches’ selection, so at least I have that in the bag, for me.”

Chloe Dygert has automatically qualified for the Olympic Games in Tokyo, and USA Cycling announced the long list to also include Rivera and Winder, along with Tayler Wiles, Leah Thomas, Lauren Stephens, Amber Neben and Krista Doebel-Hickok. Katie Hall was also on the long list but has since retired from professional cycling.

Rivera had a few setbacks in her bid to get to the Olympic Games not just because of the COVID-19 coronavirus pandemic, but also because of a concussion that forced her off the bike last year. Then while she was just finding her form, illness prevented her from racing in some of the one-day races held as part of the truncated revised calendar last October.

“I had a good end to my 2019 season, after a normal year, and everything was going to plan with the Olympics. Obviously, in the spring of 2020, I only got one race in before the pandemic shut everything down, and wasn’t able to prove myself,” Rivera said. “I also had a lot of bad luck with concussion in training, being sick, and so nothing really stood-out – no wins. The start of this year was hard.”

Rivera said that she will also look well ahead to the Olympic Games in Paris, which will be held on a route that is expected to suit her skills better.

“I’m still motivated and I love racing,” Rivera said. “Paris Olympics is only three years away and could potentially be a better course for me than Tokyo. I don’t think Tokyo will be my last chance at the Olympics.”

Rivera took some positive aspects out of racing at Brabantse Pijl this week, which gave the riders an opportunity to see parts of the route that will be used for the UCI Road World Championships in Flanders in September.

She became the first American to win the Tour of Flanders in 2017, and will place a top priority on competing at the Worlds this year.

“Tokyo is up in the air for me considering how the season started, so if I don’t make it, it’s hard for me to be mad because I’m happy with deciding not to race at the beginning of the season,” Rivera said.

“Looking forward, I can really build on what I’ve done so far, and racing at Brabantse Pijl was a good start. The Worlds in Flanders is a big goal for me, personally, and we did a part of the course at Brabantse Pijl. Historically, I’ve done well at Tour of Flanders and so Worlds would be a special race.”