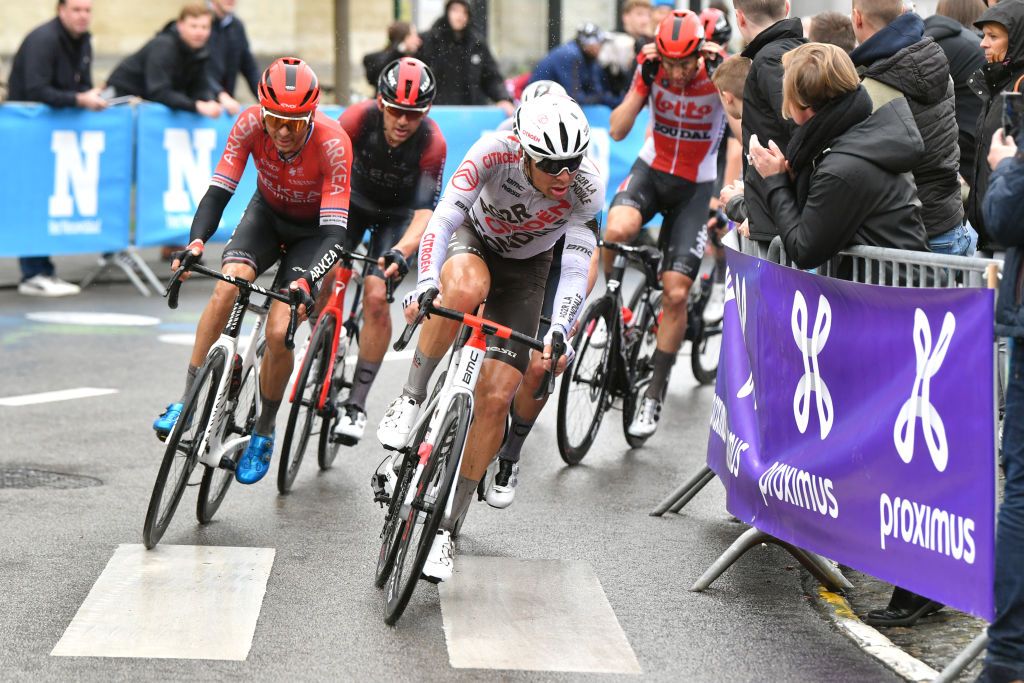 For the third time in a week, Benoît Cosnefroy finished a race in the runner-up spot, with Wednesday’s Brabantse Pijl delivering the same result as the Circuit de la Sarthe and Amstel Gold Race.

The AG2R Citroën leader was the first of two Frenchman on the podium behind Ineos Grenadiers teenager Magnus Sheffield in Overijse, with Arkéa-Samsic’s Warren Barguil taking third place after Tim Wellens (Lotto Soudal) was relegated for an illegal finishing sprint.

Speaking to DirectVelo after the race, Cosnefroy joked that he would have been happier if Ineos Grenadiers hadn’t raced, given he was also beaten by Michał Kwiatkowski at Amstel last Sunday.

“I’d be happy if they weren’t here,” he said. “I’m happy to be in second but still missing out on the win. I was hoping that would come here.

“With the Circuit de la Sarthe, it’s a lot of second places in one week,” he added. “It’s never easy to handle these situations. In the final we were all done after a hard race in the rain. I don’t necessarily have any regrets.”

Cosnefroy managed to work his way through the drama at the finish, squeezing past Wellens who drifted across the road from the centre over to the barriers on the left. The Lotto Soudal rider’s sweep across the road disrupted the sprint for both Remco Evenepoel and Barguil.

“I went at 800 metres because I didn’t want to be caught by the others from behind,” Barguil said, noting his acceleration on the climb to the finishing sprint before the sprint. “If I had to lose everything, I’d rather lose to my breakaway companions than to see riders from behind come back.

“I tried to sprint again, but I had almost nothing left. I couldn’t pass Tim before the line. I was disappointed to not be in third place, but then… He almost sent Remco [into the barriers] and so I also braked when I saw it.

“It’s unfortunate for him. For me, it’s a bit of luck to have this podium, but I didn’t lose anything during the race. I didn’t give up until the finish line.”

Just as he and Evenepoel had suffered a similar block at the finish, Barguil also had a tough time on the wet cobbled climbs, having had trouble staying in the gutter. He was dropped when Sheffield accelerated on the final ascent of the Hertstraat at 10km to go but made it back and eventually recovered a podium spot.

“On the climb with the gutter, it was always a problem if I couldn’t get into it,” he said. “Every time I crossed it, I was making a very intense effort to get back. Without the cobblestones on these hills, it would have been very different, but I had to deal with it. It was complicated, but I was still happy with the way I felt.”

Both Cosnefroy and Barguil will now look towards next week’s Walloon Classics in the Ardennes, with the pair both targeting La Flèche Wallonne and Liège-Bastogne-Liège. Cosnefroy finished second at Flèche two years ago, while Barguil has six top 10 finishes to his name across the two races.